When you become a fan of a team, one of the first questions asked was "Who are the team's rivals? Who do the fans hate the most?" I honestly was asked this question recently by a new fan to the Rock. I was able to tell her that she would find out very quickly thanks to some of the fan's chants. However, it got me to thinking, wouldn't it be great to have a list of not only who are the Devils rivals but also why do Devils fans hate those teams?

The New Jersey Devils have a number of rivalries in the NHL. In my opinion, as it currently stands, there are two big Rivalries - two teams that Devils fans across the board despise and would love to see beaten over and over by New Jersey. A number of teams who are sort of in a mix of teams various people hate for various reasons.

For this guide, I've included responses directly from In Lou We Trust users to get a base opinion on each team.

The Devils fans yell "Rangers Suck" at nearly every home game. There are t-shirts you can buy at the Gateway Center that say "I only root for two teams The Devils and whoever is beating the Rangers." Earlier in January, I met a fan named Eddie on my way to the Rock who was wearing this jersey to the game. It pretty much sums up the feeling Devils fans have for the Rangers (thanks to Eddie for letting me take this photo for ILWT): 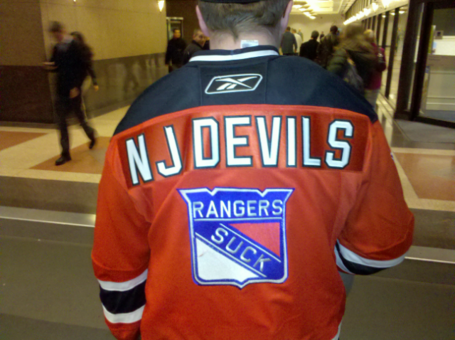 Yes, Devils fans hate the Rangers. With a passion. Here are some reasons from the ILWT users as to why they hate them so much:

With the Rangers, it goes back to the philosophy of New York teams, like the Yankees for instance: sign the biggest names in the sport and expect the championships to roll in easily. The only thing is that the Rangers haven’t won enough to prove that philosophy true.

Also, it comes down to two central figures: Sean Avery and Glen Sather. Avery and New York were made for each other; the flashy style of Manhattan suits his mindset well, he is all about an extravagant lifestyle. Because of that, this makes him a really irritating human being (if you wanna call him that). As for Sather, he’s over the hill. He believes he can bring in big name talent just to recapture his magic in Edmonton. Everyone knows, though, that time has passed him by, only he doesn’t know it.

Since their inception, they have dominated southern New Jersey just as the Rangers have had a long stronghold on northern New Jersey. Yet, since the Devils moved from Colorado, they represent the #2 most hated team in many fans' eyes for numerous reasons. After all, they are the subject of the "swallow" part after people yell "Rangers Suck." Here are some reasons from the users:

[This is for the non-big 2 rivals, but if you provide enough reasons for hatred, I can bump a team up into their own section. I did go into some reason why they aren't Big Rivals]

Why Devils Fans Don't Care for Them: Divisional opponents, seemingly have the team's number in recent seasons, local opponents like the Rangers and Flyers.

Why Devils Fans Don't Have a Passionate Hatred for Them: They haven't been all that good in recent years.

Why Devils Fans Don't Care for Them: Divisional opponents, Sidney Crosby, Evgeni Malkin, have had more recent success, and they are a good team now.

Why Devils Fans Don't Have a Passionate Hatred for Them: They aren't local and for some reason I can't put my finger on, there's more begrudging respect than hatred.

Why Devils Fans Don't Care for Them: Playoff losses to the Hurricanes, the 2009 first round, another team that they seemingly have the Devils number more often than not.

Why Devils Fans Don't Have a Passionate Hatred for Them: Not in the same division and quite frankly, they alternate between being decent and downright awful.

Why Devils Fans Don't Care for Them: Tie Domi elbowing Scott Niedermayer in Game 6 in the second round of the 2001 Playoffs, which had pretty much had a huge impact on the Devils not going back-to-back as Stanley Cup champions. Also, they're pretty much the Rangers of Canada.

Why Devils Fans Don't Have a Passionate Hatred for Them: Not local and they've been Islanders-esque in terms of success to warrant much attention.

If you have any more reasons why the Devils don't like these teams or any other questions, please e-mail me.