Should the Devils Introduce a Third Jersey?

With all the turnover in the Devils organization this summer, a previously-answered question has been asked anew. Should the Devils add a new alternate jersey to their uniform lineup?

Share All sharing options for: Should the Devils Introduce a Third Jersey?

As this blog just made the leap from In Lou We Trust to All About the Jersey yesterday, I figured a jersey-themed post would be appropriate today. It's a question that every Devils fan has probably asked themselves or a friend at one point or another: should the Devils introduce a third jersey to their set of uniforms? CJ posted a question about the uniforms in general back in the summer asking if the Devils should change anything about their look as they head into a new era. Here, I'm strictly talking about a third/alternate jersey, separate from the home and away sets which I don't believe should be touched because they're damn near perfect.

A debate (a mostly pointless one when Lou was at the helm) has bubbled among fans over the years on whether the Devils should go along with the prevailing trend of NHL teams having a third jersey to wear on a handful of nights throughout the year. The Devils, always traditional to the bone, have resisted this trend successfully throughout their existence. Fans should be most appreciative of this being the case through the '90s, when truly awful things were happening to jerseys all around the league. With the horrors of the '90s long gone and Lou now the GM in Toronto (still weird), the timing does make some sense for the team to introduce a new design. The question is: should they? Let's run down some of the pros and cons.

One drawback to having a classic look that you don't change is that, well, it never changes. Adding a third jersey is a way to break things up a little bit, and it gives the team some leeway to be ambitious and creative with a new uniform design. The Devils have great jerseys, but it's understandable that people would want to see something a little different every now and then after close to 25 years in the same threads. If the Devils put some good thought into the jerseys, they have the potential to make something cool without crossing into the ridiculous. The Devils color palette of red, white, and black is pretty ideal for jerseys and their logo is great as well, so they have a solid foundation to build on. A new third jersey, done well, could be a good complement to an already great set of home and away jerseys.

Stick With What Works

On the flip side of that, when you have a uniform that can scarcely be improved on like the Devils, the introduction of a third jersey seems a bit pointless. I would put the Devils' uniforms among the best in the league and perhaps even sports in general. They are bold without being outlandish, and classic without being boring. The red, white, and black are a winning color combination, and the Devils crest/logo is hard to beat. Every night the Devils are wearing a potential third jersey is a night they aren't wearing some of the best uniforms around.

For a team who could always use another revenue stream like the Devils, a third jersey is a tried and true way for an organization to collect a few extra dollars to stay profitable. Some dismiss third jerseys as a cash grab from fans by teams, but for me there's an element of "so what?" in response to that sentiment. No one is forcing fans to go out and buy third jerseys when they are introduced. And it's not like a full-on uniform or team color change where fans might feel obligated to grab a new jersey that matches the one the team is wearing on the ice. So if the team wants to take the opportunity to make some extra dollars by introducing a new option, it probably isn't the worst thing.

They Already Kind of Have One

For the past five or so years, the Devils have been periodically wearing their throwback red, white, and green once or twice a year. In effect, by going with the throwback greens, it allows the Devils to have their cake and eat it too. It was a classic Loophole Lou move: the jersey isn't really a third jersey, since it's just a throwback to the team's roots in New Jersey when they first arrived, but it serves the purpose of one as it gives fans a different look every once in a while. The retro jerseys are great and the team wears them rarely enough that it's still kind of an event when they put them on. In a way, it's the best way to do an alternate jersey. It's historically significant to the organization, rather than something just grabbed out of the air, and it's a good look that still has some novelty because the team has used them sparingly enough.

The team has changed a lot of things this offseason. Some of them are certainly for the better (opening some practices and prospect camp up to fans). Others have received more mixed reviews (the removal of the old number traditions). It seems like a lot of the old quirks of the Lou Lamoriello Devils may be heading out the door, but the uniforms, for now, remain intact. Bringing in a third jersey cracks open the door to more possibly radical changes to the uniforms in the future. If the team has big success selling a third jersey, maybe they figure a whole new set would rake in that much more. I understand that some people might be on board with shaking things up, but - and I've said this plenty now - the Devils' jerseys are pretty much perfect as is and something that could lead to them changing gives me major pause. We should heed the warnings of the Buffaslug, the Gorton's Fisherman, and pretty much anything the Ducks have worn since 2007 and be very weary of any changes happening to a uniform that works so well.

Ultimately, this is obviously a personal preference thing. It's hard to say there's a right or wrong answer, but personally, I'd rather the team stay on the sidelines of the third jersey racket. When you have a classic jersey, there is no need to overthink things. Third jerseys open the door to overthinking things, and I'm not sure I trust the leadership of organization not to get an itchy trigger finger with the current state of the on-ice product. Before you know it, we could see home games where the players are skating around in some nonsense like this.

But that's just me. I know opinions have been mixed across the fanbase on this issue, so I want to hear from you, the readers. Would you like to see the team introduce a third jersey? Or do you prefer the team sticks with their home and away jerseys with an occasional visit from the retros? Take the poll below and sound off with your thoughts in the comments. If you have concepts you've seen that you like, post them in the comments below (please try to give credit to a creator if the design isn't yours). Meanwhile, in case everyone ends up being for a third jersey, I came up with this sharp number for home games against the Rags. I think it is timeless in its elegance. 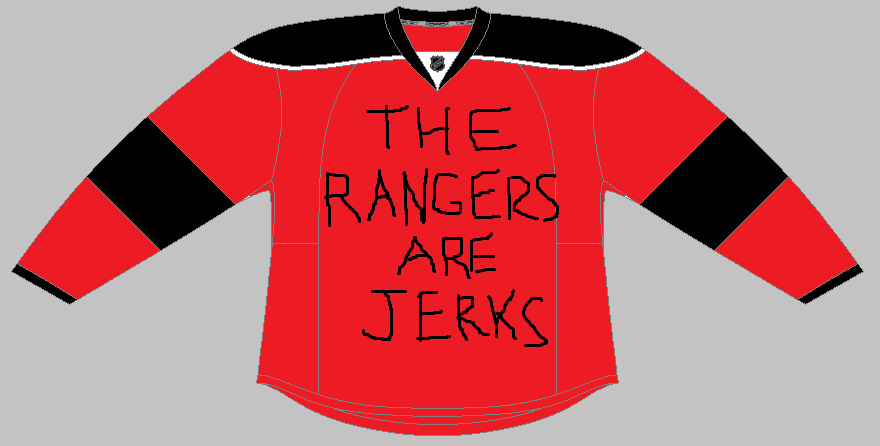 Breathtaking, if I do say so myself.