Should We Temper Expectations for Albany in 2014-15?

The Albany Devils made the playoffs in 2013-14, becoming just the second Devils AHL team to make it in the past fourteen seasons. Should we expect a repeat of last season or will it be another frustrating year?

Share All sharing options for: Should We Temper Expectations for Albany in 2014-15?

It's no secret that for years the Devils AHL team has struggled to make the playoffs. It didn't matter if they played in Albany or Lowell, were called the River Rats or Devils, it's been a tough time. Just two Devils AHL teams have made the playoffs in the past fourteen seasons, the 2009-10 Lowell Devils and 2013-14 Albany Devils. I wanted to take a look at PDO on the team level to see how the Devils AHL teams compare year to year and what it may tell us about the upcoming season.  Since the AHL site has game by game data available since the 2005-06 season, I used that as my starting point.

A reminder that PDO at the team level is just a team's Shooting Percentage (SH%) plus Save Percentage (SV%), traditionally at even strength. PDO is expected to regress to around 100% with teams below that considered unlucky and teams above that fortunate to a certain degree. Since the AHL doesn't have real time data to separate shots at even strength from special teams, the PDO I use below is in all situations. 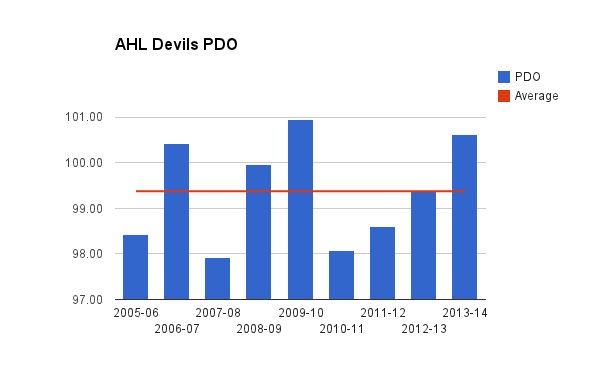 The above table and chart show the Devils good fortune both offensively and defensively in their two playoff seasons. Focusing on the 2013-14 season, it's clear that the Devils outperformed their average PDO from 2005-14 of 99.37% as well as the traditional 100% baseline, with a PDO of 100.62%. What was the biggest cause of this and a reason that I am concerned about their 2014-15 season? Shooting percentage. 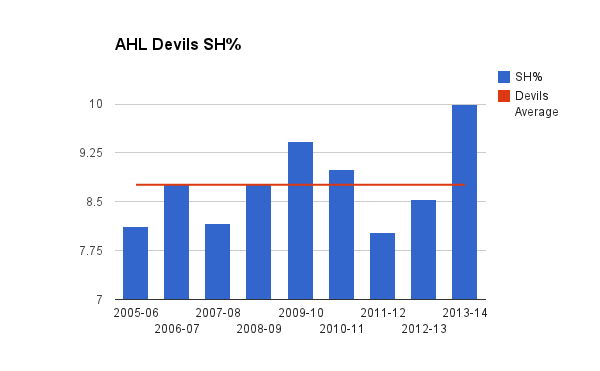 The AHL Devils have an average SH% of 8.76% from 2005-14. In 2013-14 they shot at an unusually high 10% as a team. Prior to last season, the AHL Devils only reached the 9% mark twice, one of which being the 2009-10 year that sent them to the playoffs. Considering they only made the playoffs last year by five points, any regression could significantly hurt their chances in 2014-15. 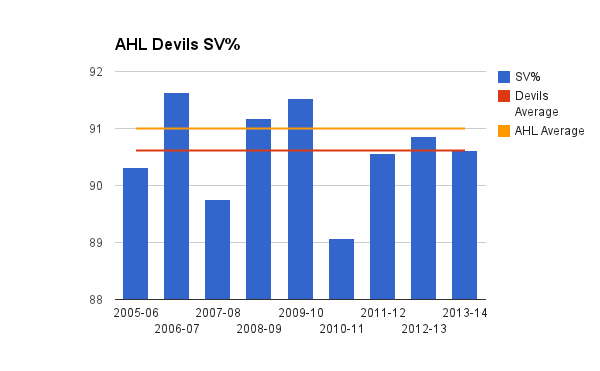 Please note in the chart above I use 91.0% as the AHL league average SV%. I only calculated it for 2013-14 so use that number as a reference point for the other seasons.

It's clear that in recent seasons poor goaltending has hurt the AHL Devils. Even last year's decent season by Keith Kinkaid wasn't enough to put the Devils at the AHL average. Scott Wedgewood's bad year had a lot to do with that. The team should be fine with Kinkaid or Scott Clemmensen in net but any slight regression, coupled with another poor year for Wedgewood could cause the AHL Devils to drop valuable points.

AHL Equivalencies for the New Additions

The above AHLE's are courtesy of the data from Behind the Net. The Devils have five CHL prospects making the jump to the AHL next year, though the above AHLE's seem a bit optimistic. Graham Black's equivalency is propped up by the insane 1.41 Pts/GP he put up as one of the oldest players in the WHL. Same for Myles Bell to a lesser degree. I wouldn't expect either Ben Johnson or Ben Thomson to play on the PP that much in their rookie AHL years, especially with last year's PP forwards Joe Whitney, Kelly Zajac, Mike Sislo, Scott Timmins, and Reid Boucher all set to return. Even Damon Severson's numbers seem a bit generous and likely should be lowered. After all he's going from one of the best WHL teams to an Albany offense that isn't known to be prolific.

Above is a table of Albany's top goal scorers last season. It appears that quite a few of them benefited from a high shooting percentage, so let's compare it to their AHL career averages prior to last season.

Obviously there are sample size issues dealing with Reid Boucher, Stefan Matteau, and Kelly Zajac due to their limited AHL experience prior to last year. Though their 2013-14 SH%'s were higher than both the team average of 10% and 2005-14 average of 8.76% which would suggest some regression is due in 2014-15.

Harri Pesonen is the only player whose 2013-14 SH% went down from his previous AHL average but he's moved on and won't be in the fold for Albany this upcoming season. Good news is that Joe Whitney and Scott Timmins were close to where their career averages would indicate they should end up, so little regression is expected out of their production.

Now for the most interesting part. Mike Sislo put up more goals in 59 games in 2013-14 than he did in his previous 123 AHL games, partially due to a raise of about 7% in his SH%. Tim Sestito saw his SH% jump up almost 8%. Rod Pelley only saw his SH% jump up about 2% but it's unlikely he shoots close to 10% again given his track record. A lot would have to go right next year for the Devils to shoot how they did in 2013-14.

This isn't meant to be a doom and gloom post. Teams are capable of outperforming the averages and minimizing how much the regress. Perhaps one of the new Albany Devils gets hot and helps pick up some of the load on offense. Perhaps Kinkaid or Wedgewood take steps forward in their development. The point is that while this team is capable of making a run to the playoffs, it may not be fair to expect that. Either way I feel like we are in for a fun year with more prospects (especially forwards) joining Albany and players like Boucher, Matteau, and Sislo to name a few returning for more seasoning. Let me know your thoughts on the subject in the comments below and thank you for reading!