The Slot is an Issue: New Jersey Devils Shot Charts Over the Peter DeBoer Era

War on Ice is one of the new hockey stat sites and one of its main features are Hextallys: visual charts that show shot location and relative success rate. With them, let's look at the Devils' shot charts under Peter DeBoer.

Share All sharing options for: The Slot is an Issue: New Jersey Devils Shot Charts Over the Peter DeBoer Era

In the wake of Extra Skater going down and the imminent arrival of the 2014-15 season, new sites for advanced hockey statistics are beginning to catch notice.  CJ cited Progressive Hockey in his latest post, explaining why Adam Henrique is his favorite.  I'm particularly impressed with War On Ice, an effort led by Andrew C. Thomas and Sam Ventura.  It is still in beta and has plenty of cosmetic and content improvements to make.  Nevertheless, it demands your attention if only for one feature: Hextallys. It's a hex-based chart for shooting rates and shooting percentages relative to league average by location.  It's similar to the charts Kirk Goldsberry uses at Grantland for player shooting in the NBA (example).  Thomas went into more detail about them at his own site, but caveats aside (and I'll cover them later), I think it's a powerful way to display what teams do with their shots.  To highlight it's power, let's look at the shooting the Peter DeBoer era of the New Jersey Devils.

That's right, the era of Peter DeBoer.  He will be entering his fourth straight season as head coach of the New Jersey Devils.  With 212 games behind the bench, he's third all time in games behind Doug Carpenter and Jacques Lemaire.  He'll surpass Carpenter with if he gets through 2014-15, actually. I think that's worthy of being called an era. One of the powers of the Hextally at War on Ice is that multiple seasons (and playoffs) can be combined for analysis. It goes as far back as 2008-09, but since the idea is to look at one coach, I'll be looking at the regular seasons of 2011-12, 2013, and 2013-14, combined.  The charts come for both for and against the Devils, so these will show how much and how well the Devils have been shooting in various locations - and how well their opponents did.  For the sake of population size, I'm focusing on even strength although the site does allow filtering for power play and four-on-four situations.

Let's begin with shooting rates at evens over the last three seasons.  Again, all charts are available at War on Ice. 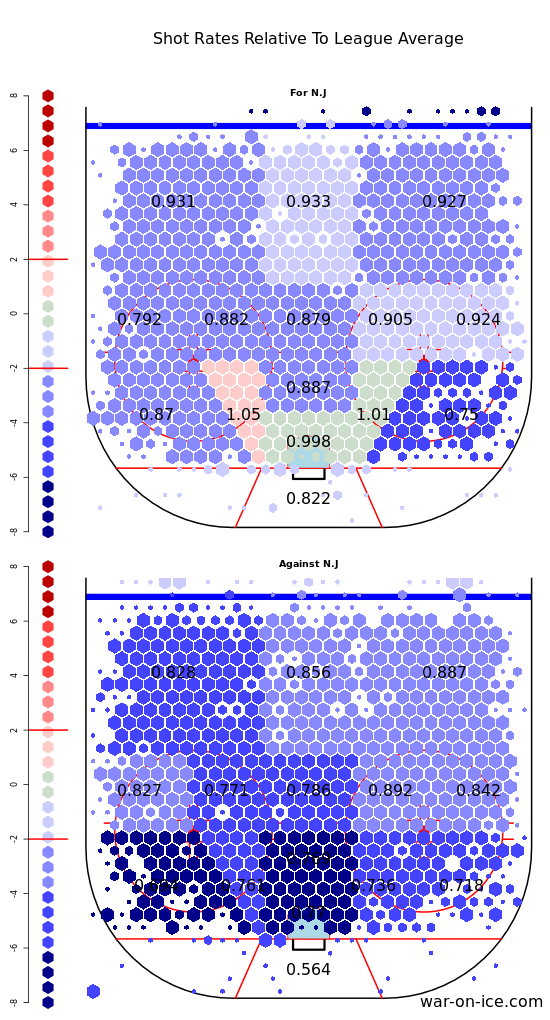 The values are relative to league average.  So 1 would be exactly with league average. The color of the hex represents how statistically significant the value is.  For example, the Devils have been just below league average at taking shots right in front of the crease, but it is not a big difference.  To me, that implies variance as the cause of the difference.

The larger issue for the top chart - shots by the Devils - is that it's nearly blue outside of the crease and the diagonal side areas next to it.   The shade indicates that not only do the Devils not shoot the puck at a rate close to league average, but significantly lower in most areas. That may not be such a big deal for the points, but the high slot and actual slot should raise an eyebrow for concern.

What shouldn't raise an eyebrow are the shooting rates against.  You may not be able to see some of the values because black over dark blue is incredibly hard.  In each of the fourteen locations Thomas and Ventura identified in the zone for these charts, the Devils have held their opponents to shooting rates below league average.  Considering this was a defense that added Marek Zidlicky, witnessed Bryce Salvador fade, and instituted a number of young players among other personnel issues, then it speaks well of the coaching that the Devils have been great at shot prevention.

Of course, that's for shooting rates.  The rate at which those shots go in tells a different tale. 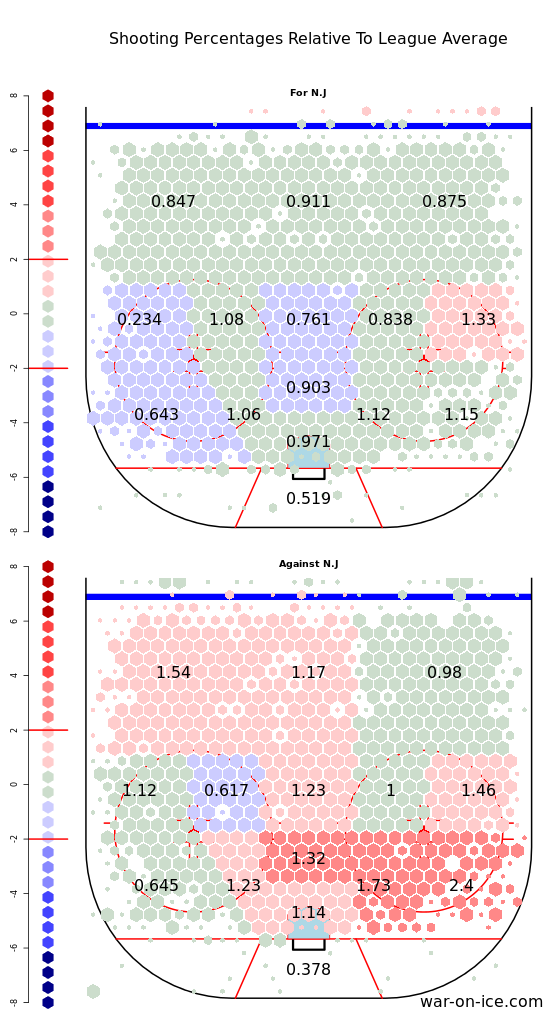 Defensively, the shot prevention doesn't necessarily yield lower percentages.  Opponents have been shooting at significantly better percentages from the slot, to the right of the slot, and the far right corner over the last three seasons.  Unfortunately, there's no way to filter out goaltenders from the team page.  There are player pages but they do not include relative shooting percentages against goaltenders.  Most of the other locations show higher than average percentages but not significantly so like those three locations.   Perhaps this speaks to an notion that the Devils may be great at preventing shots, but if the shot's taken, it may be more likely to go in. Then again, given that the Devils' own shooting percentage has been on the lower end, maybe everyone else will seem higher.

Now, let's me address an important caveat.  As with most of the analytics that have come out in past years, it's dependent on data directly from NHL scorers.  Tom Awad identified this issue way back in 2009; this foundation is built on sand.  If shots are miscounted, then the location of those shots should also be suspect. Unfortunately, there's nothing we can do about it.  Manual tracking of zone entries and passes carry good value and are easy to identify. They are discrete events.  Location of a shot on ice, though, that's really difficult to identify through watching. So I am not confident in a grassroots location-tracking effort will get off the ground. Until scorers get better (I'm not holding my breath) or something like SportVU is implemented league-wide to provide systemically better data (I can only hope), then it'll be on teams (hint, hint, Mr. Mehta) to get better data.   Because Thomas' Hextallys among other stats would only be made stronger.

Until then, we can look at the last three seasons for away games only.  By taking the Devils' home scorer bias out, the other scorers won't have as large of an individual effect. With 123 games worth of data, I am hoping that is enough that really inaccurate locations won't skew the accurate ones.  That said, here are shooting rates away from the Rock: 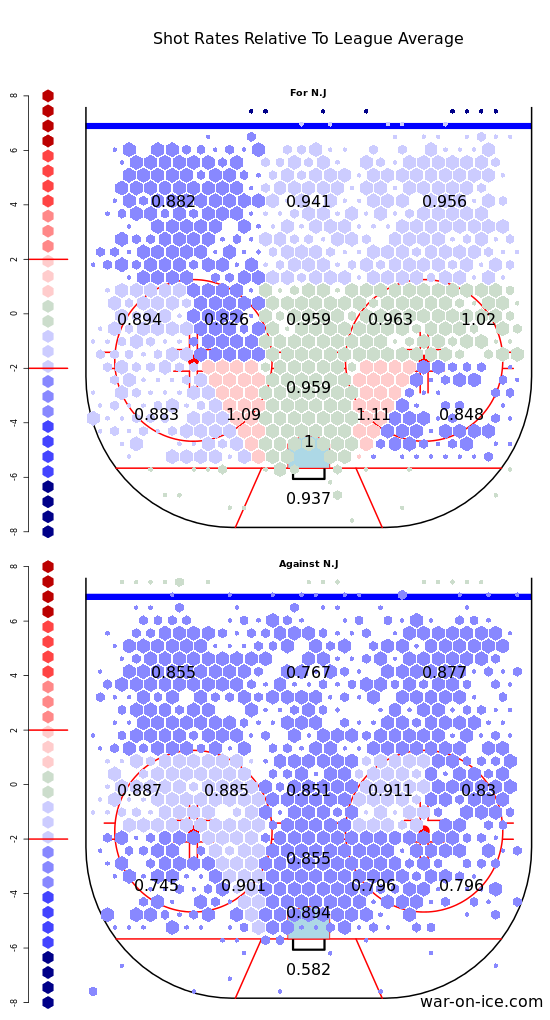 The Devils have been markedly better at getting shots in the slot in away games compared to all games.   They're still relatively low from the left point and that upper inside left circle.  They're still only ahead of the league average next to the slot.  Defensively, the good news is that the Devils remain legitimately good at shot prevention. They aren't as impressive but opposition shooting rates are significantly lower than league average in nearly all of the dangerous locations.  The left of the slot and the upper inside of the circles are exceptions, but still below average.   Again, considering the personnel over the last three seasons, it speaks well of the system and how the coach utilizes the talent.

And now here are the shooting percentages: 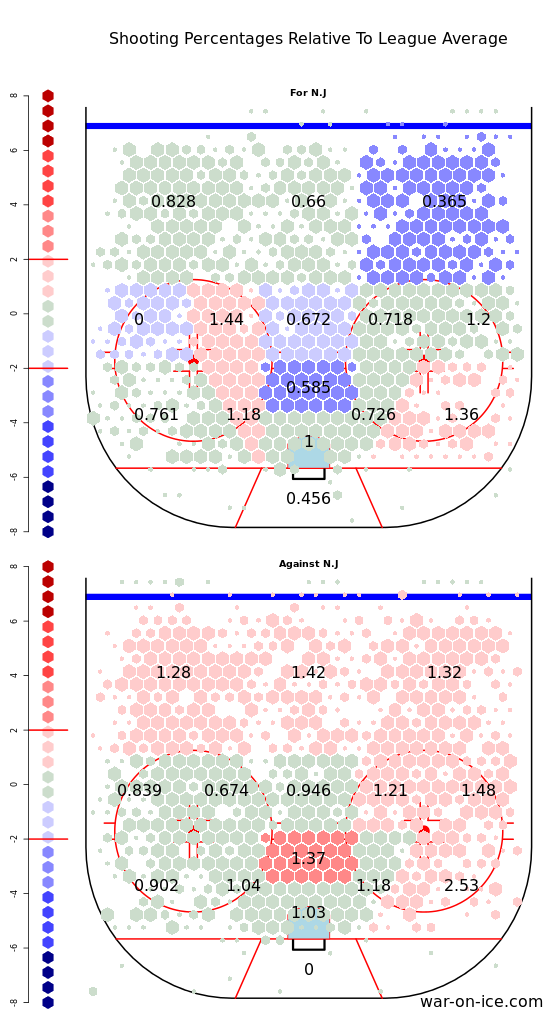 Even strength shooting percentages from away games show that attention really needs to be paid to the middle of the ice.  From the opposition, they beat the average in most locations but only significantly so in the slot. That's still a big deal because that's arguably the most desirable area for an offensive player to shoot from.  As for the Devils shooting, again, they are significantly below league average in the slot.  Only the right point is as significantly low but I can understand not having much puck luck from long distance shots.  The slot, on the other hand, that's something to really think about.

With the caveat of the quality of the data, I think the Hextally is a very good tool.  There's some cosmetic changes I would recommend, like clearer numbers on the side that count goals out of total shots and a different color for the relative numbers.  But these graphs immediately raise an important question for the Devils when it comes to shooting at even strength.  Why is the slot, among other locations, such a problem?  Even away from home, they are below league average at taking shots from there and they aren't relatively good at converting them.  Defensively, the Devils handle the slot well from a shooting rate perspective but not at all from a shooting percentage perspective.   I focused solely on Peter DeBoer's three seasons, but a quick glance at War On Ice doesn't show much improvement in the three seasons before DeBoer. That said, if we learned anything from Ryan's passing studies, then it's that tactics has a hand in how the puck is distributed, which leads to where the shots are taken.

Of course, the first step to address this at the team level is to truly verify that there is a problem.  Get better data than the scorers.  Focus solely on areas of interest (I don't think the sideboards matter much). If something similar shows with more accurate data, then the issue needs to be considered from all angles.  Is it in the approach on offense? Is it in how they are moving the puck?  Is it where the players are told to go in offensive situations? Is it the players themselves?  Are the shots in the slot dis-proportionally a certain type that would affect percentage?  These are questions that come to my mind, but again, it's worth any team's time to get higher quality information.

Nevertheless, this sort of thing excites me.   In my view, the main purpose of analytics is help us to delve deeper into figuring out why things the way they are.  I hope Progressive Hockey and War On Ice help to continue that charge by providing information and tools to analyze that information for our benefit.  And that they do so if (or when) the founders get hired by NHL teams.

As we care about the Devils, a team that will likely struggle to score goals again, these Hextally charts make me feel more confident where the issues lie.  The slot is clearly an issue.  I don't know how to answer the questions that come from that, but at least I know it's worth asking about.  So let's talk about it in the comments.  What do you think of the Hextally concept?  Do you agree that the slot is the issue when it comes to shooting for and against the Devils at even strength?  What can the Devils do, if anything, to get more shots in the slot?  What can the Devils do, if anything, more of those shots into the net?  What about on defense, where opponents have been firing them in at better than league average rates even though the Devils are limiting their shooting rates?   Please leave your answers and other relevant thoughts in the comments.