This is a look at the passing statistics for the New Jersey Devils and their Pacific Division opponents. Read on for the details.

Share All sharing options for: 2013 - 2014 Devils Passing Review: Devils vs the Pacific Division

This is a look at how the New Jersey Devils and their opponents fared in their Pacific Division matchups this past season. As I’ve written a lot on the Devils with obvious reasons, this post will focus more on the opposing players. Since the sample size for these players and teams is only from two to five games, we’ll treat this as "What Players/Teams were the Devils able to contain?" and also, "Which Players/Teams had their way with the Devils?" In the interest of brevity, on an individual level, I’ll be looking solely at shot generation and Corsi contribution; on a team level, I’ll be looking at efficiency and where shots were generated from.

Part Ten: Devils and the Atlantic

Part Eleven: Devils and the Central

Dam Hamhuis and Kevin Bieska each generated seven shot attempts against the Devils. Hamhuis generated fewer shots (two to Bieska’s five), but was involved in twelve of the sixteen Corsi events while he was on the ice. Bieska added eight shot attempts of his own to go along with the seven he generated.

Cory Tanev and Alex Edler each generated four attempts. Edler tied Bieska for the position lead with eight shot attempts of his own. Jason Garrison on the ice for the most Corsi events (34), but was involved the least with only one SAG and five iCF. 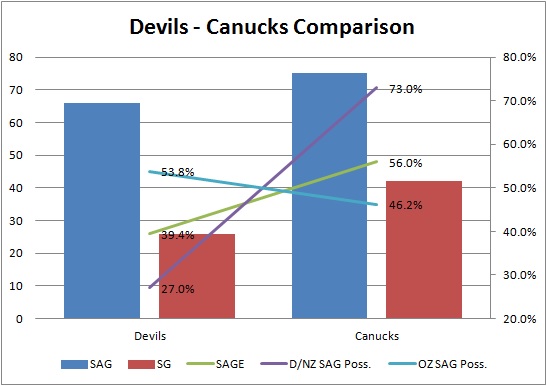 The Canucks, much like other Western Conference teams, were more efficient and controlled a greater share of transition shot attempts generated in the passing game. The Devils controlled the larger share of offensive zone shot attempts, but only by a few percentage points.

Only four of the Coyotes’ defensemen generated shot attempts via their passing: Oliver Ekman-Larsson (2 SAG, 1 SG), Dean Schlemko (3 SAG, 2 SG), Zibyanek Michalek (4 SAG, 3 SG), and Keith Yandle (4 SAG, 2 SG) were those four and they were the ones driving the Corsi bus from the blue line. Yandle and Ekman-Larsson were most involved as they each attempted eight of their own shot attempts. 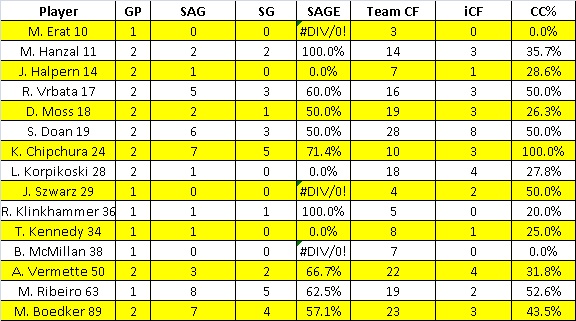 Mike Ribeiro, personal issues or not, tore into the Devils in his only game against them. He generated five shots on eight attempts, while attempting two of his own. Phoenix attempted nineteen shots with him on the ice, in one game! Impressive. 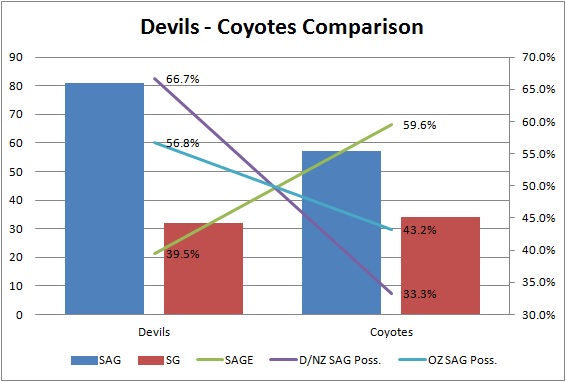 The Devils controlled a significant amount of the shot attempts generated via passing, but the Coyotes made theirs count more as they had a 20% edge in efficiency. So, for all the Corsi and attempts the Devils had, the Coyotes actually had more shots from their passing than the Devils.

Hamphus Lindholm was the most effective passer among Ducks defensemen, generating three shots on four attempts and adding four of his own. He contributed to 40% of the team’s Corsi while on the ice, a big number for a defenseman. The Ducks also posted their highest Corsi total with Lindholm on the ice. 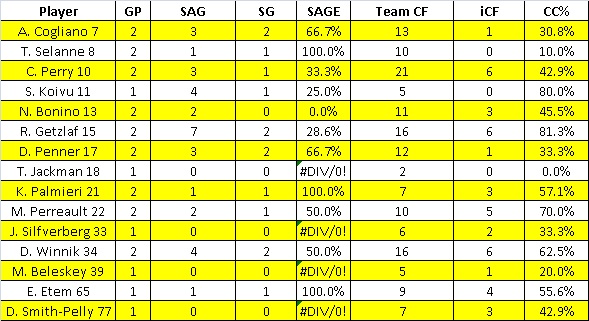 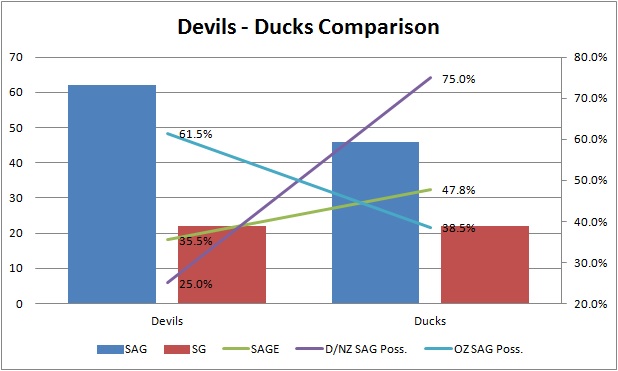 Chris Butler led the Flames’ blue line with four shots generated on seven attempts. There was not much else from the other Flames defensemen. Dennis Wideman attempted nine shots in one game, and Kris Russell attempted eight over two, but this was a unit that did not get too involved in generating offense. 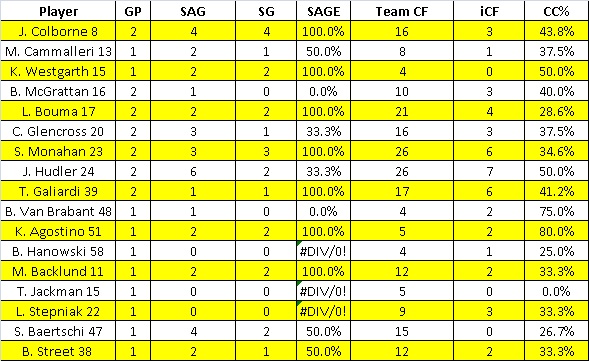 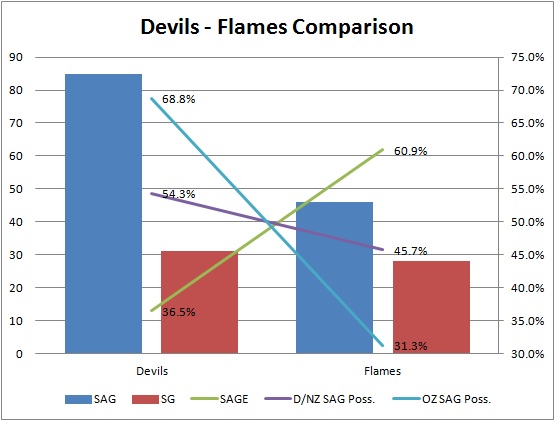 Almost done with these, as I’m sure many of you are tired of seeing the Devils control the larger share of offense generated via their passing, only to see their opponents as far more efficient.

Jake Muzzin led all Kings defensemen with six shot attempts generated, resulting in three shots. Alec Martinez led the blue line with nine shot attempts. Unsurprisingly, the Kings totaled their highest number of Corsi events with Drew Doughty on the ice (41), of which he contributed to nine events—three via pass, and six of his own shot attempts.

So, Anze Kopitar is quite good. Over two games he generated fourteen shot attempts, six shots, and attempted nine shots of his own. The team recorded forty-one Corsi events with Kopitar on the ice, twenty-three of which Kopitar contributed to (56.1%).

Justin Williams (11 iCF) and Dustin Brown (13 iCF) were the obvious benefactors of Kopitar dishing the puck. In these two games against the Devils, Kopitar was certainly the straw that stirred the drink, to use a tired cliché. 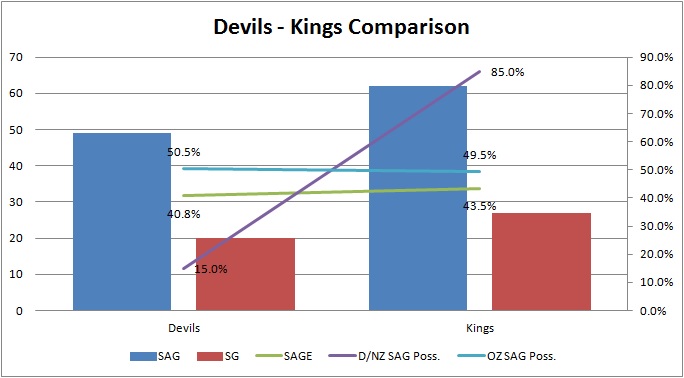 The Kings controlled 85% of the shot attempts generated in transition and were nearly identical with the Devils in terms of shot attempts generated in the offensive zone. Both teams were not that great in the efficiency department, but the Kings held a small edge (43.5% to 40.8%). The low efficiency points to the similar styles of the two teams. Notable differences between the two? The Kings most likely are a better team at creating offense in the neutral zone, and also have a bit more skill in their lineup than the Devils.

Jeff Petry generated four shot attempts and two shots, adding four of his own shot attempts against the Devils. Petry contributed to just under a third of the twenty-six Corsi events while on the ice—a solid percentage for a defenseman. Each of the other Oiler defensemen generated at least one shot attempt, but no more than two. It was a low-event group apart from Petry. 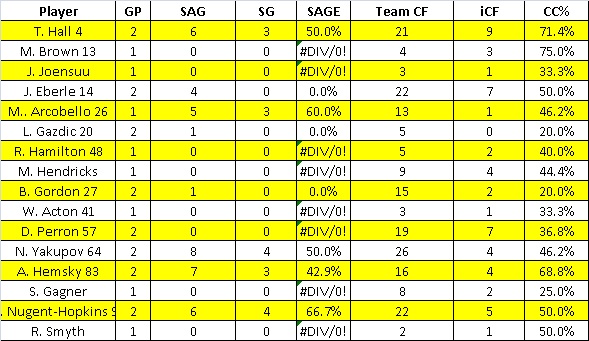 Up front, Nail Yakupov led all forwards with four shots generated on eight attempts. He added four attempts of his own and was on the ice for the highest number of Corsi events (26), contributing to nearly half (46.2%). Ales Hemsky (7 SAG, 3 SG), Ryan Nugent-Hopkins (6 SAG, 4 SG), and Taylor Hall (6 SAG, 3SG) each produced solid stats in the passing game. Hall led all forwards with nine shot attempts as he contributed to 71.4% of the Corsi events while on the ice.

Mike Arcobello generated three shots on five attempts, providing some secondary offense in the passing game for the Oilers. Jordan Eberle generated four attempts, but none reached the net. He did add seven shot attempts of his own to help make up for it. 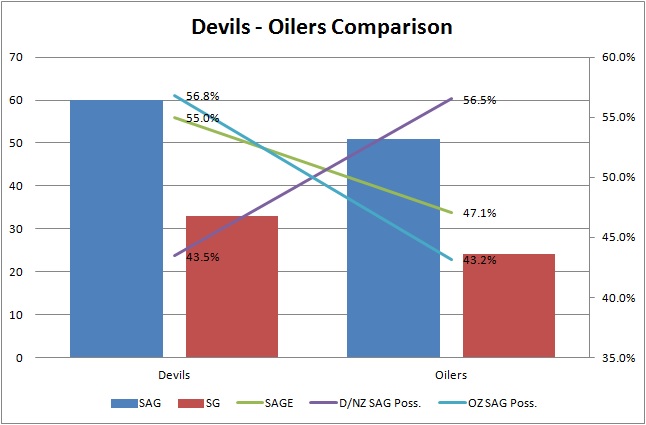 Jason Demers generated nine attempts via his passing in just two games for the Sharks. He added eight attempts of his own, contributing to 45.9% of the team’s Corsi total while on the ice, a staggeringly high number for a defenseman. Scott Hannan added three attempts on five generated, but the rest of the blue line seemed to allow most of the offense to run through Demers. 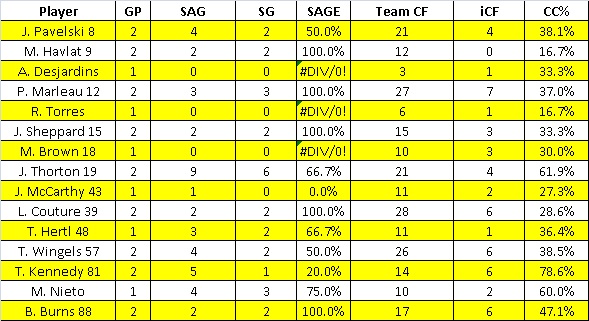 Joe Thorton generated six shots on nine attempts. He added four of his own attempts, contributing to 61.9% of the team’s offense while on the ice. The rest of the offense was pretty spread out with several players notching two, three, or even four and five shot attempts generated. A strong performance from the Sharks forwards in the passing game. 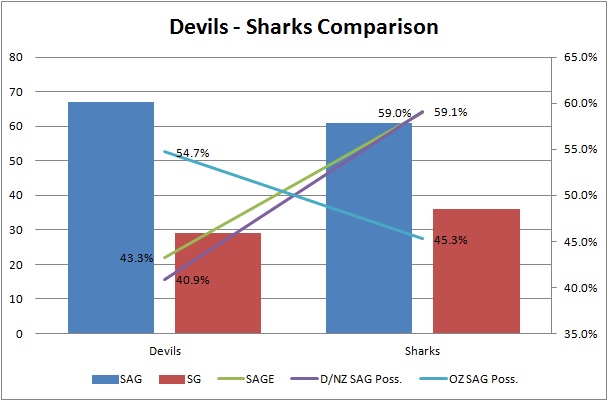 It’s fitting we close on a graph we’ve seen too many times: The Devils controlled offense generated within the offensive zone, the opposition controlled transition shot attempts generated and more efficient.