Over the past two plus decades, goaltending has been one of the rock solid strong points for the New Jersey Devils, thanks to Martin Brodeur. The new franchise guy is now Cory Schneider. Do analytics give him strong odds at success? Let's see.

Share All sharing options for: In Depth Stats: Cory Schneider

The other week, I wrote an article about how I felt Cory Schneider would be in contention to win the Vezina trophy this year, based on comparing his overall numbers to those of Tuukka Rask's.  Since then, I began reading this year's edition of Hockey Abstract by Rob Vollman.  Last year I felt that he had great information on hockey analytics in there, and I wanted to see what new information there was to digest.  This time around, he has a large section devoted to advanced goaltending stats.  He looks at how analytics can be applied to goalies through the use of these statistics, since netminders are still largely judged by save percentage.

After I read through the section, I decided to go back and specifically look for Cory Schneider, to see how he stood up against the competition in terms of advanced statistics.  Were his underlying numbers just as good as his save percentage indicates, or has that stat been bloated for him due to varying circumstances?  To me, a confirmation that Schneider performs well in advanced statistics would even further solidify the idea that he has a decent chance to win the Vezina.

Before I delve into the stats, I need to give credit to Rob Vollman and Hockey Abstract.  The statistics that I will be using in this article, along with most of numbers that I will show, come from his book.  It really is quality work in my opinion.

For goalies, a quality start is determined by having a .917 save percentage or better if he faces at least 20 shots in the game.  If he faces less than 20 shots, then he only needs to perform as well as an average AHL call-up would perform, which equates to a .885 save percentage.  The reasoning behind that is if the sample size is too low, it can skew the numbers.

In the NHL, the average starting goalie will get a quality start on 53.4% of his starts.  Replacement level goalies come in at a much lower 42.8%, but that number may be skewed because backups do not play that often.  What all of this means is that if a goalie is great and not just average, he needs to be above the 60% mark for quality starts.

For Cory Schneider, over his last 100 starts he has had 69 quality starts, which is a fabulous 69% QS rate.  Furthermore, out of the rest of those 31 starts in which he did not record a quality start, in only 10 of them did he have a save percentage under .885.  Since 2011, the only goaltender to post a better quality start percentage than Schneider is Brian Elliott, who has 56 quality starts in 81 attempts for a QS% of 69.1%.  Clearly, Cory has been excellent these past few seasons, and this helps showcase that.  Other notables: Tuukka Rask, 68.4%.  Henrik Lundqvist, 64.7%.  Jonathan Quick, 63%.  Martin Brodeur, 51.2% (all data for these numbers date back to the 2011-2012 season).

One of the issues with save percentage is that it is impossible to tell exactly what kinds of shots goaltenders are stopping.  Some goalies may be facing far easier shots thanks to their defenses, while other goalies may be facing more high percentage shots due to poor defenses in front of them.  One way to help showcase shot quality is to note the average shot distance that each goalie sees.  The lower the average shot distance, the harder shots a goalie will be facing on average.

For Schneider, he has not had it easy.  Going back to the 2011-2012 season, the average shot distance that he has faced has been just over 35 feet.  This is below league average, which is around 36 feet.  Rask sees some of the easiest shots in the league, with an average shot distance of just under 38 feet.  Other goaltenders who see similar shots to Schneider in terms of distance: Lundqvist, Jaroslav Halak, Kari Lehtonen, Corey Crawford, Ondrej Pavelec.  The funny thing is that out of all of those goaltenders who face similar shot distance to Schneider, none of them has as good of a save percentage as the one who will man the net for the Devils.  For goalies who face a similar quality of shots, Schneider is one of the best.

To further delve into shot quality, another stat developed by Vollman is the home plate save percentage.  The home plate is the area right in front of the net where scoring chances tend to be the most dangerous.  A picture of it is here: 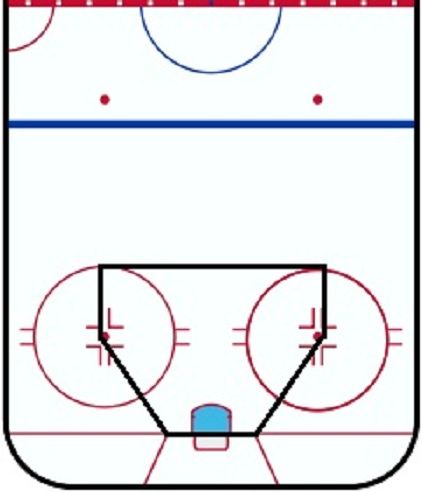 The interesting thing, however, is that not all starting goaltenders are particularly excellent at the shootout.  Sergei Bobrovsky has a career .636 save percentage on them, Ondrej Pavelec has a .639, and Mike Smith has a .627.  Granted these numbers are all considerably above Schneider's, but Cory has only played in 19 career shootouts.  Give him a larger sample size and hopefully that .594 will rise up.  He may never become a shootout expert, but if he can just be competent, his skills during the rest of a hockey game will more than make up for this potential shortcoming.

Conclusions and Your Take

In the end, I feel like these numbers really aid Schneider's cause as being one of the top goaltenders in the NHL.  He may not win the Vezina trophy this year, but I would certainly count on him being in the running for it.  The underlying stats and analytics show that he has been dynamite between the pipes, and the Devils are extremely fortunate to have him locked up long term.  I personally am very happy that he is the one who will be taking over for Marty.  Best case scenario...we're looking at a transition from Joe Montana to Steve Young, NHL style.

What do you think though?  Do you agree with these numbers and analytics that Schneider is one of the best goaltenders in the league?  Or are you skeptical until you see him play a full season in New Jersey?  Or are you simply skeptical of the advanced stats being used in general, and think that they are not a good representation of what is actually happening on the ice?  Please leave your comments below, and thank you for reading.