The Battle for the New Jersey Devils Backup Goaltender Spot

As New Jersey Devils training camp opens up for rookies, the battles for roster spots begin. This post looks at one of the more important ones: the backup goaltender position, likely fought between Keith Kinkaid and Scott Clemmensen.

Share All sharing options for: The Battle for the New Jersey Devils Backup Goaltender Spot

Today is the official beginning of training camp for the New Jersey Devils.  Not everyone is here; rookies will report for physicals.  It's still the dawn of a new campaign.  As with 29 other teams, the Devils have their own questions that have to be answered before the regular season begins in October.   One of the biggest is in net.  Cory Schneider got paid real well this summer and will be the starter.  So who will be his backup?

There are four other goalies in the Devils' system, but it's really a two man battle.  Maxime Clermont hasn't been good in the ECHL, so we can rule him out. Scott Wedgewood just finished his rookie season in the AHL and didn't crack 90% in overall save percentage. Therefore, I highly doubt Wedgewood will take the job short of a miraculous performance.   It'll come down to Keith Kinkaid and Scott Clemmensen.

I get the sense that Kinkaid is the heir apparent, for lack of a better term.  The Devils signed him directly out of Union College after the 2010-11 season.  He's been in Albany for the last three seasons and became the starter right as a rookie.  He even got a call-up and a game in 2013.  Essentially, he was the #3 goalie in the system. With Brodeur gone, he moves up in theory.  Is it a good idea?  His overall save percentages of 90.4%, 90.5%, and 91.2% aren't awful.  The improvement is a nice to see.  Yet, the percentages on their own doesn't inspire much confidence in his future at the next level.  Kinkaid cracked the top 20 in AHL save percentage for the first time last season and right at 20th.  While conversion from the minors to the NHL for goalies remains a bit unknown, I'm not completely sold he's ready given that he has not been one of the better goalies in the AHL in the last three seasons.

Clemmensen returned to the organization this summer when the Devils signed him to a one-year, two-way deal back on July 1. At the time, it was regarded as a move for insurance.  Clemmensen is now 37 and his recent numbers with the Florida Panthers inspire less confidence than Kinkaid's not-great AHL numbers.  In 2013, Clemmensen's overall save percentage was a woeful 87.4%.  He worked that up to a still-bad 89.6% last season.  Keep in mind he only made 19 and 17 appearances respectively in those seasons.  He was a backup in Florida the numbers show he wasn't good.

However, there's a little more to it than that for Clemmensen.  Notice that I stated his overall save percentage. What about even strength?  Here's his save percentage history over the last six seasons.  The numbers come from NHL.com. 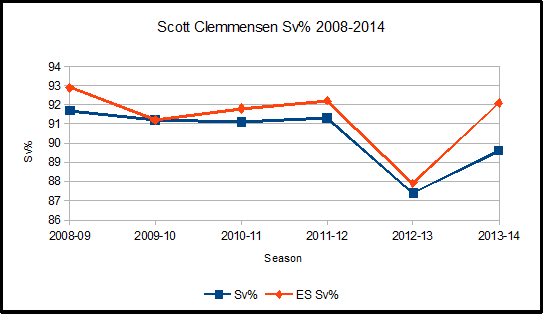 Clemmensen's overall save percentage hasn't strayed too much from his even strength save percentage over the last six years.   In fact, it's been consistently better.   Notice that big disparity last season.  Clemmensen posted a 92.1% at evens for the Panthers.  The penalty kill destroyed his percentage - and hurt Florida - with a astonishingly poor 77.6% save percentage when down a man.   It's such a low number, I doubt it's repeatable.   I wouldn't expect Clemmensen to suddenly put up great numbers in 2014-15.  Yet, it doesn't seem so far fetched to me that he could put up something not too far below league average in about 20 games.  That would be an improvement over last season's #2 goalie.  He's been doing that for the better part of the last five seasons (Clemmensen started 39 in 2008-09 for NJ).  My point with this is to show that it's not a slam dunk to say Clemmensen won't be the #2 goalie.

It's not a guarantee that he could be, though.  Again, he's 37 and he's received fewer starts over the last three seasons (25, 11 in a lockout season, 14).  His style shows he's got happy skates, though I may still have 2008-09 in mind.   While his even strength numbers are encouraging to a degree, a few bad games will torpedo that. The real question is whether Kinkaid can provide a similar or better level of performance for about 20 games this season.  He might, but it's not a gimmie in my eyes. That's what the battle will try to determine.  How both do in camp and in preseason will determine that.  The Devils should be better in net if only because Schneider will get more starts in 2014-15. How this battle turns out could make a real difference as far as how the team does this season.  If Kinkaid and/or Clemmensen both float around 90% save percentage for 15-20 games, then that's a real problem unless the skaters magically score plenty of goals to overcome those nights.   Two men competing for a backup goaltender role is not a sexy battle; but it's one of the important ones for Devils camp this fall.

I think Kinkaid may have the inside track as I think Clemmensen was signed as a veteran Plan B.  But I don't think it would be a total nightmare if said veteran ultimately gets the position provided his save percentage doesn't go south like it did in 2013.   I'll put the questions to you in the meantime.  Again, this battle is going to be between the NHL-inexperienced Kinkaid or the veteran Clemmensen.   Who do you want get the spot, and why?  What will either have to show to get it?  Please leave your answers and other thoughts about the goalies not named Schneider in the comments.  Thanks for reading.