This is a look at the passing stats from the New Jersey Devils Central Division matchups. Read on for the details.

Share All sharing options for: 2013 - 2014 Devils Passing Review: Devils vs the Central Division

This is a look at how the New Jersey Devils and their opponents fared in their Central division matchups this past season. As I’ve written a lot on the Devils with obvious reasons, this post will focus more on the opposing players. Since the sample size for these players and teams is only from two to five games, we’ll treat this as "What Players/Teams were the Devils able to contain?" and also, "Which Players/Teams had their way with the Devils?" In the interest of brevity, on an individual level, I’ll be looking solely at shot generation and Corsi contribution; on a team level, I’ll be looking at efficiency and where shots were generated from.

Part Ten: Devils and the Atlantic

Andre Benoit was able to generate the most shot attempts on the Avs’ blue line (5). Erik Johnson was most involved in his team’s Corsi events, contributing to 38.5% of them. Tyson Barrie generated the most shots (3) on only three attempts.

Matt Duchene and Gabriel Landeskog were the most effective in the passing game for Colorado as they generated nine and seven shot attempts, and five and four shots, respectively. Jamie McGinn (9) and Nathan MacKinnon (8) led the group in shot attempts. Duchene contributed to the largest percentage (61.5%) of the team’s Corsi events. 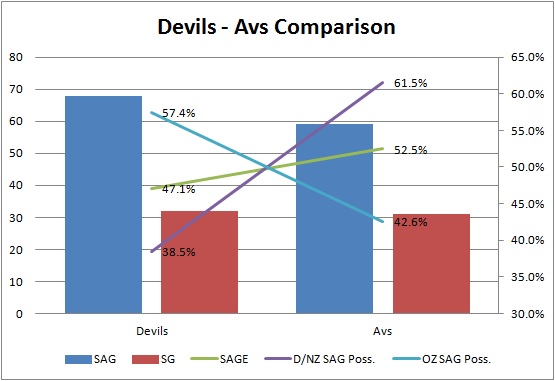 Each of the Blues defensemen generated at least one shot attempt against the Devils, with Barrett Jackman leading the way with five. Jackman, Alex Petrangelo, and Kevin Shattenkirk led the blue line with five, five, and six of their own shot attempts. Jackman was most involved in the team’s Corsi events and was also on the ice for the team’s highest total number of events as well. 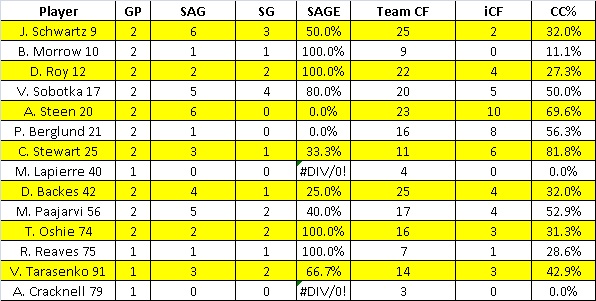 Jaden Schwartz and Alex Steen each generated six shot attempts over the two games against the Devils. Magnus Paajarvi and Vladimir Sobotka were next with five each. Sobotka had the highest number of shots generated with four. Steen led the group with ten of his own shot attempts. Patrik Berglund did next to nothing in the passing game, but was second behind Steen with eight shot attempts. Steen was on the ice for twenty-three Corsi events and contributed to sixteen of them (69.6%). #Involved. 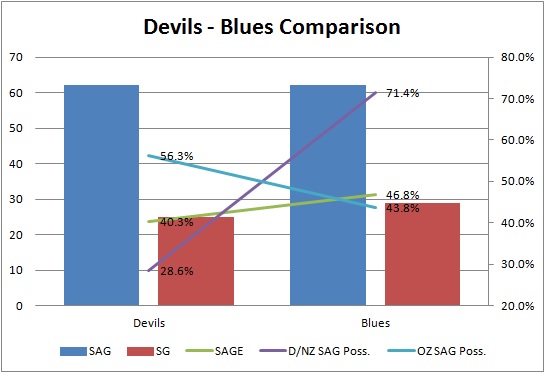 The Blues created heavily in transition, controlling 71.4% of the shot attempts generated. They generated more shots than the Devils overall and had an edge in efficiency as well (46.8% to 40.3%).

The Blackhawks destroyed the Devils in their two games, so it’s no surprise to see the volume generated by them here (wait until you get to the forwards). Brent Seabrook and Duncan Keith led the way in terms of volume and contributed to about a quarter of the Corsi events over their two games versus the Devils. Keep in mind they were on the ice for forty-five and forty-four events respectively. That’s a lot in just two games.

Ouch. One thing that stood out was how few Corsi events Jonathan Toews contributed to (28.6%) with respect to the other forwards. I guess the Captain doesn’t have to do too much when Patrick Sharp (7 SAG, 14 iCF), Marian Hossa (6 SAG, 12 iCF), and Patrick Kane (6 SAG, 7 iCF) are doing the heavy lifting. Toews did generate the most shots of the group (5), and was the most efficient while tying Sharp for the team lead with seven SAG.

Brandan Saad generated three fewer shot attempts than Kane, but attempted two more of his own. They ended up contributing to about the same number of Corsi events (50% to 52%). 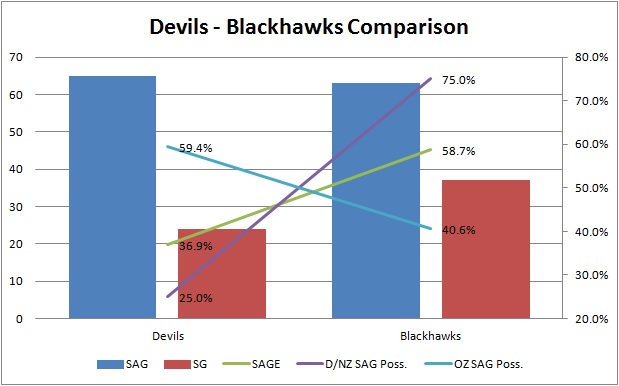 Other than Tobias Enstrom (4 SAG, 4 SG) and Dustin Byfuglien (3 SAG, 1 SG), there wasn’t a whole lot of offense created via passing from the Winnipeg blue line. Big Buff attempted five shots, which led the Jets D, and he was involved in only 25% of the Corsi events against the Devils.

It seems like Evander Kane is always involved in trade rumors. Well, if the Jets were to trade him, the owner should fire the entire front office. Kane attempted thirteen shots in two games against the Devils, generating another four. He was involved in 63% of the Corsi events (17/27) for the Jets. Andrew Ladd (5 SAG, 2 SG) and Bryan Little (4 SAG, 3SG) generated many of those shot attempts for Kane.

Olli Jokinen actually led the group in generating five shots on seven attempts. He added four of his own, contributing to 64.7% of the Corsi events while on the ice, but the volume the team generated was far lower than when Kane, Little, or Blake Wheeler were on the ice. Wheeler didn’t generate a single shot attempt, but took seven of his own. 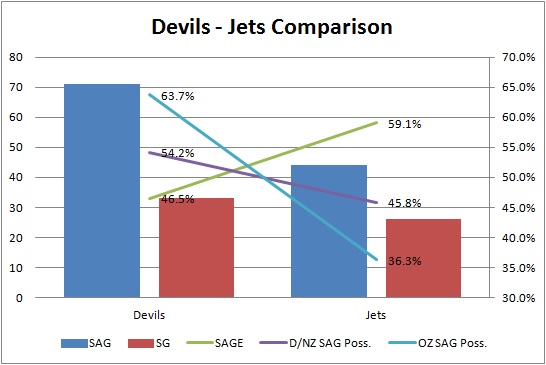 The Devils actually controlled shot attempts generated in both transition and in the offensive zone, but were yet again behind their opponents in terms of efficiency.

Ryan Ellis and Roman Josi each generated three shots on five attempts, which were best on the Predators’ blue line. The Predators had their highest Corsi total (18) when Josi was on the ice, which isn’t much over a two game stretch. Rookie Seth Jones generated four attempts, two shots, attempted five of his own and contributed to 60% of the events. 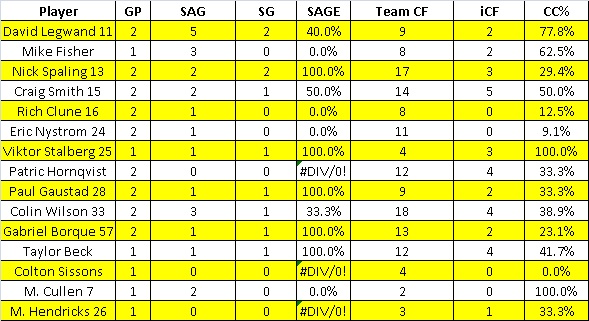 Similar to his output against the Devils while wearing a Red Wings sweater, David Legwand was able to generate five shot attempts against the Devils. There was very little offense via the pass by the Predators. In fact, there’s not too much to write about. 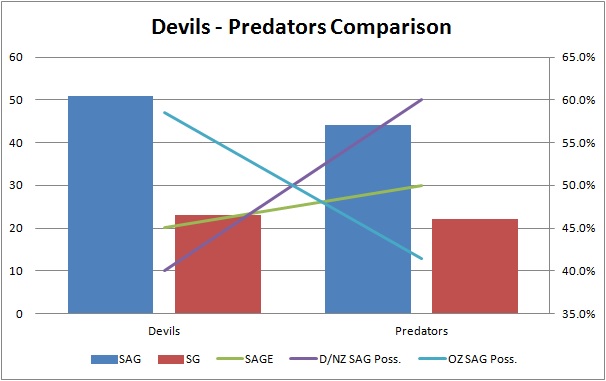 Same old story: low-event game with the Devils less efficient and generating most of their offense in the offensive zone, eschewing offense in transition for dull, predictable board play and shots from the point. Yawn.

Cometh the hour, cometh the Seguin. Tyler Seguin generated eleven shot attempts, attempted nine shots of his own, and contributed to 60.6% of Dallas’ Corsi events while on the ice. Of those eleven shot attempts generated, only two registered as shots as the Stars had poor efficiency overall, but I doubt that would continue over a larger sample. Hoping to get a volunteer for Dallas next season as I bet this will be an exciting team to track with Seguin and Jason Spezza on board.

Cody Eakin was one behind Seguin in the iCF category, attempting eight shots of his own. He generated two shots on five attempts. He was on the ice for half the Corsi events as Seguin, but contributed to 76.5% of them. 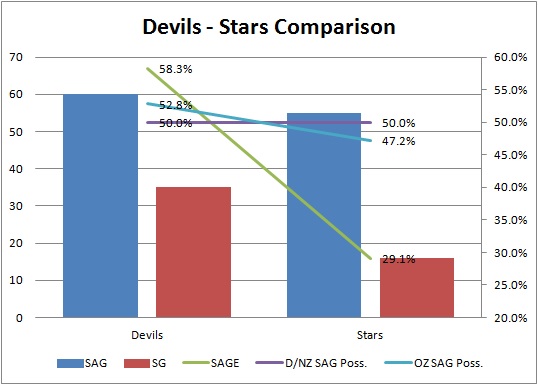 The team’s split the shot attempts generated in transition and the Devils held a slight edge in offensive zone SAG. The Stars put up the lowest SAGE of any team that faced the Devils this past season (29.1%) and the Devils happened to put forth two efficient outings (58.3%).

Not too much from the Wild blue line, apart from Ryan Suter generating three shots on three attempts. Suter added six shot attempts of his own and contributed to nine of the team’s twenty-one Corsi events.

Also, you’ll notice Nate Prosser’s CC% of 200; the reason for that is simply where I differ from the league in tracking what is and what is not a shot attempt. 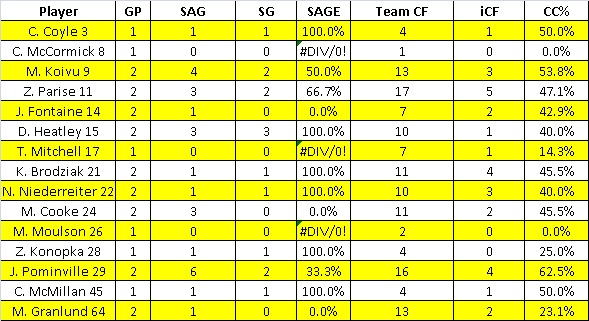 Jason Pominville led the group with six shot attempts generated, adding four of his own. Zach Parise (3 SAG, 2 SG, 5 iCF), Mikko Koivu (4 SAG, 2 SG, 3 iCF), and Dany Heatley (3 SAG, 3SG, 1 iCF) were the other top performers for the Wild against the Devils. Pominville turned out to be most involved in the Wild’s Corsi generation (62.5% CC). 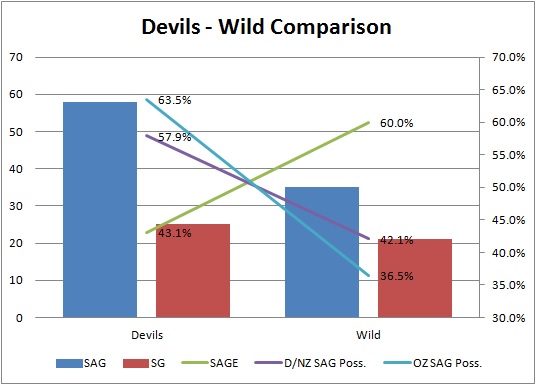 The Devils controlled the offense generated from the passing game in both transition and offensive zone phases of the game. The Wild were 17% more efficient in their shot generation.