This is a look at the how the New Jersey Devils fared against their Atlantic Division opponents in the passing game. Read on for the details.

Share All sharing options for: 2013 - 2014 Devils Passing Review: Devils vs the Atlantic Division

This is a look at how the New Jersey Devils and their opponents fared in their Atlantic Division matchups this past season. As I’ve written a lot on the Devils with obvious reasons, this post will focus more on the opposing players. Since the sample size for these players and teams is only from two to five games, we’ll treat this as “What Players/Teams were the Devils able to contain?” and also, “Which Players/Teams had their way with the Devils?” In the interest of brevity, on an individual level, I’ll be looking solely at shot generation and Corsi contribution; on a team level, I’ll be looking at efficiency and where shots were generated from.

While the Sabres were nothing resembling a competent team this season, they still managed to play the Devils close (like they always seem to do). The team has made lots of moves recently in an attempt to tank and get Connor McDavid, but they should not have gotten rid of Christian Ehrhoff. In three games against the Devils, Ehrhoff generated eight attempts, six shots, and 46.2% of the Sabres offense ran through him. Unsurprisingly, the Sabres Corsi For was highest when Ehrhoff was on the ice. At the contract they had him at, I’ll never know why they bought him out. In his only game against the Devils, rookie Ramsus Ristolainen generated three attempts and two shots—a solid performance by a young player. 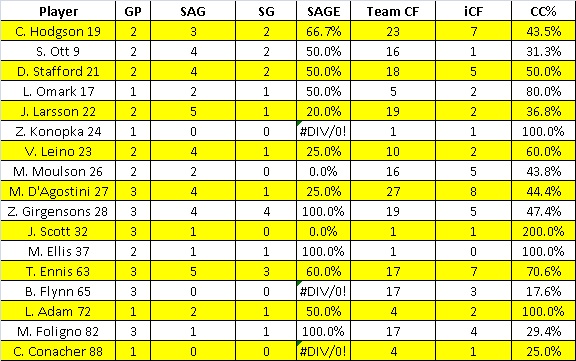 The forward who was on the ice for the most Corsi events for the Sabres was Matt D’Agostini. Yea, I didn’t believe it either. The forwards were woeful as no one came close to matching Ehrhoff’s eight SAG. The closest were Tyler Ennis (5) and Johan Larsson (5). Zemgus Girgensons generated four attempts, but each one resulted in a shot, so that was efficient play. The Sabres’ forwards will be interesting to monitor this coming season as they could be an exciting group if second overall pick Sam Reinhart joins the likes of Larsson, Girgensons, and veterans Matt Moulson, Ennis, and Cody Hodgson. They still might lose, but they might lose in a more entertaining manner than last season. 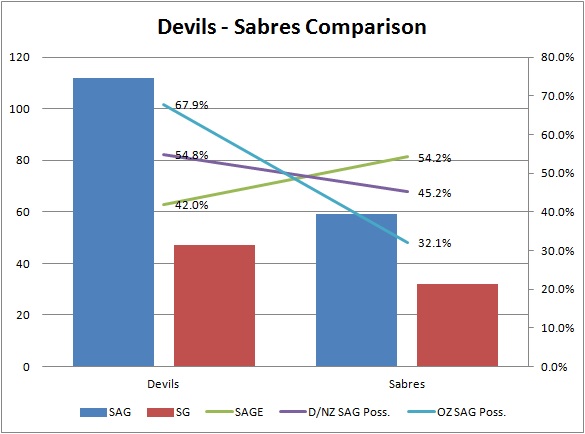 The Devils controlled the greater share of shot attempts in both transition and the offensive zone, yet were 12% less efficient than the Sabres. What’s noteworthy is the low volume from the Sabres: in three games, they managed to only generate just over thirty shots.

Torrey Krug was really the only blue liner that did damage in the passing game against the Devils in their three matchups with the Bruins. He generated five shot attempts and four shots. 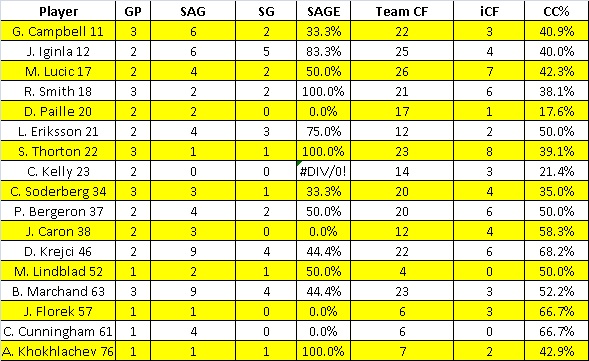 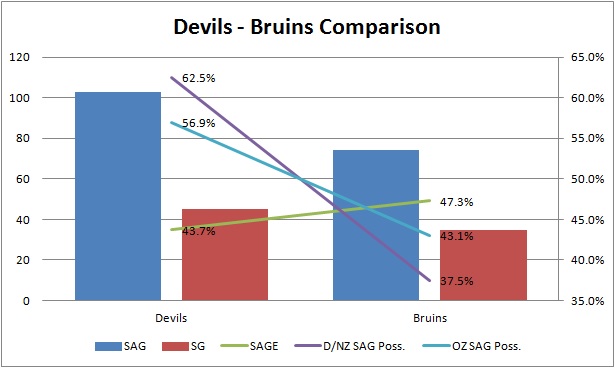 Important to keep in mind was that the third game of this season series was the Devils final home game of the season in which the Bruins rested several key players (Zdeno Chara, Milan Lucic, Patrice Bergeron, etc.), so it does skew these totals somewhat. The Devils were still behind their opposition in terms of efficiency.

PK Subban generated six shot attempts in his three games against the Devils, leading the Montreal blue line. Andrei Markov generated one fewer attempt (5), but one more shot (3) than Subban. These two were on the ice when Montreal attempted their most shot attempts (Team CF), but were not as involved as often when compared to Rafael Diaz. Diaz contributed to 36.1% of the team’s thirty-six shot attempts compared to Markov’s 31.7% and Subban’s 20.5%. Oh and Douglass Murray and Francis Bouillon are probably not needed. 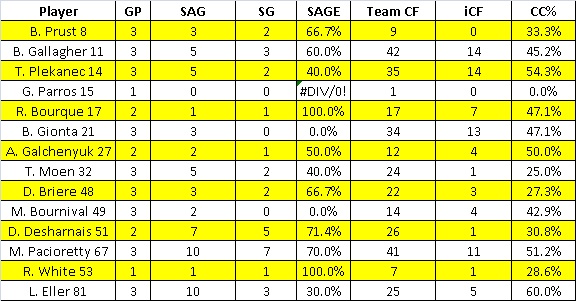 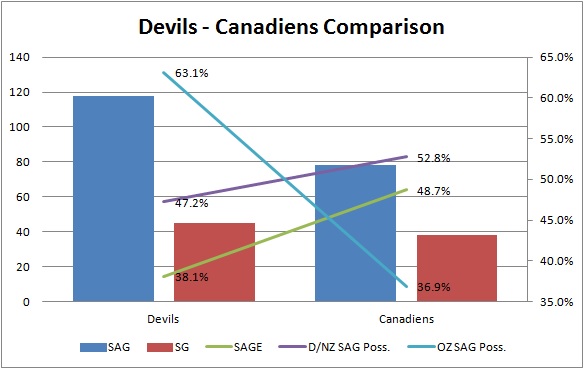 The Leafs D generated twenty-six shot attempts and only eight shots, which is quite terrible. Jake Gardiner led the group with 8 SAG, but only 1 SG. Dion Phaneuf led the blue line in shot attempts (11) and was the Leafs most involved defender as he contributed to 55.2% of their Corsi events (16/29). Morgan Reilly attempted eight shots, but failed to generate a single one. Carl Gunnarson was just behind Gardiner in volume of shot attempts generated (7), but only offered a single shot attempt of his own going forward. 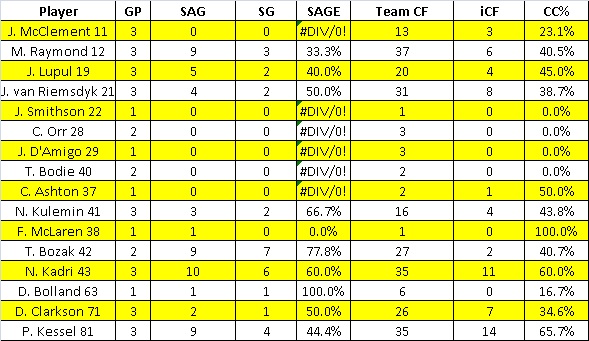 Nazem Kadri led Leafs forwards with ten shot attempts generated, six of which resulted in actual shots. He also attempted eleven shots himself, contributing to 60% of the Leafs Corsi events. He was only bettered by Phil Kessel who generated nine shot attempts and attempted fourteen for a 65.7% contribution. Of course, Kadri’s passes were more efficient as they led to two more shots, but both really drove the bus for the Leafs.

Tyler Bozak was the Leafs most efficient forward as he generated seven shots on nine attempts, but offered little in terms of his own shooting (two attempts). Mason Raymond also generated nine shot attempts, yet only three shots. Lots of volume of the Leafs, but the efficiency was mixed, though it was better than the blue line. 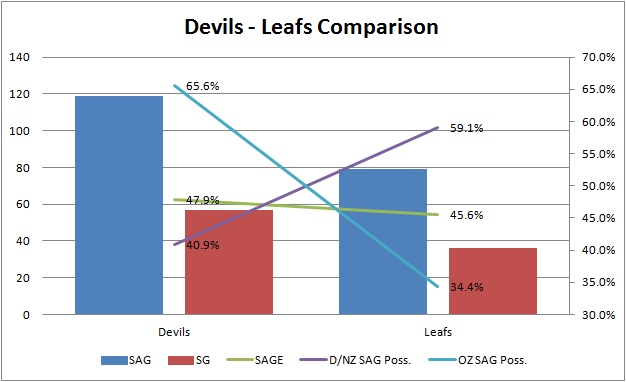 In terms of volume, Brian Campbell led the way, generating seven shot attempts and three shots. The Panthers attempted forty-one shots while Campbell was on the ice, and he contributed to fourteen of them (34.1%). There wasn’t much volume from the rest of the Panther’s blue line, but when they did generate shot attempts, more often than not they would register as shots, so it was decent group in terms of efficiency (ten shots on eighteen attempts). 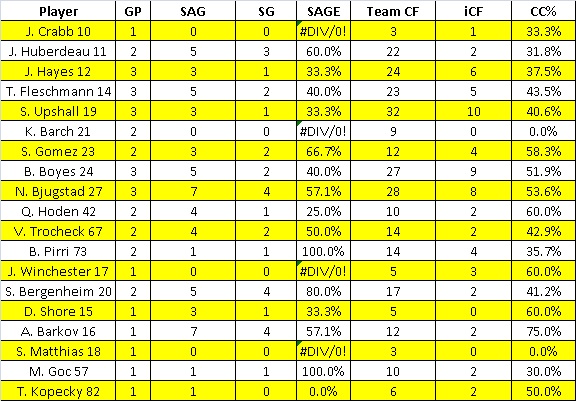 Alexander Barkov only played in one of the three games against the Devils, but he was massive in it. With Barkov on the ice, the Panthers attempted twelve shots: Barkov generated seven and attempted two, contributed to 75% of the team’s Corsi. Nick Bjugstad generated seven shot attempts and four shots, attempted eight of his own and contributed to 53.6% of the team’s Corsi. Bjugstad was on a line with Brad Boyes and Sean Bergenheim which received the nickname “Killer Bs” from Panthers fans. They did play well together and would be a solid depth line for any team, but the Panthers need a bit more quality at the top of their lineup. Jonathan Huberdeau generated five attempts and three shots over two games against the Devils. Scottie Upshall led the group with ten shot attempts, one more than Boyes. 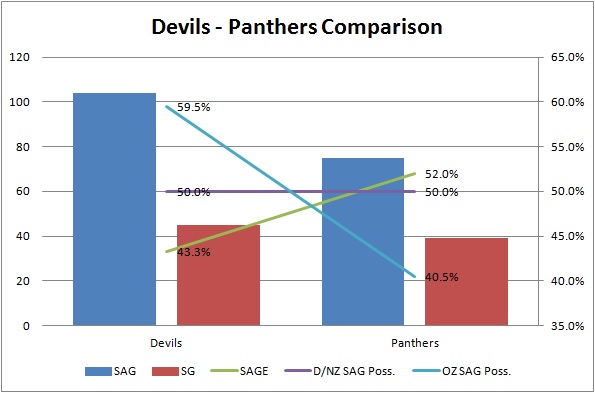 The Red Wings blue line generated only fifteen shot attempts and eight shots over three games. Their matchup against the Devils was one that seemed to game plan in a specific way. Their defensemen would linger in their own end and make a pass to a forward as they entered the Devils zone. The forwards did most of the work from there, but it was a very quick transition from defense to offense. When I track A2 SAG figures (potential second assists) this coming season, I’m hoping this may shed more light on a system like the Red Wings. 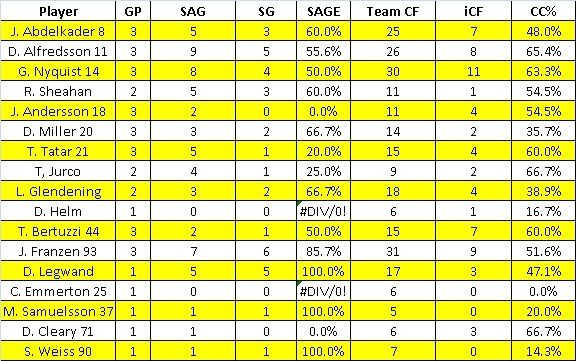 The efficiency from the Red Wings forwards was astounding. 57.4% SAGE is crazy good. Johan Franzen was a beast (7 SAG, 6 SG), David Legwand, in his only game with the Red Wings against the Devils, generated five shots on only five attempts. Gustav Nyquist led the group with eleven of his own shot attempts, but still managed to generated four shots on eight attempts. Daniel Alfredsson generated five on nine. It went on and on like that. Most of this offense came in the home-and-home series the two teams played in early March. 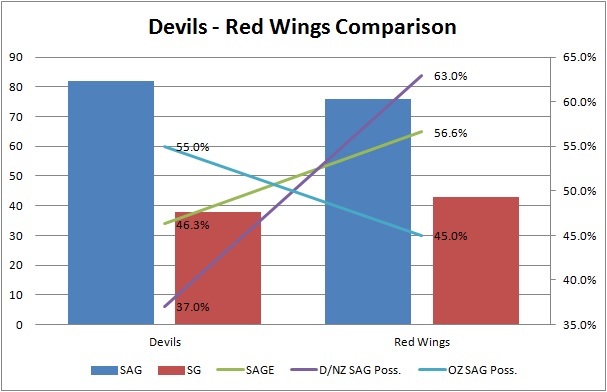 The Red Wings controlled 63% of the transition shot attempts and managed to keep close to the Devils in terms of offensive zone SAG (45% - 55%), an area the Devils usually dominate. They were very efficient, operating at 56.6% in their passing, compared to the Devils’ 46.3%. Systems like the Red Wings will be of more importance this coming season.

Well, Erik Karlsson is good. He generated ten shot attempts, five shots, and attempted fifteen of his own in Ottawa’s three games against the Devils. There wasn’t much behind him in terms of passing offense as no one else averaged more than one SAG per game. 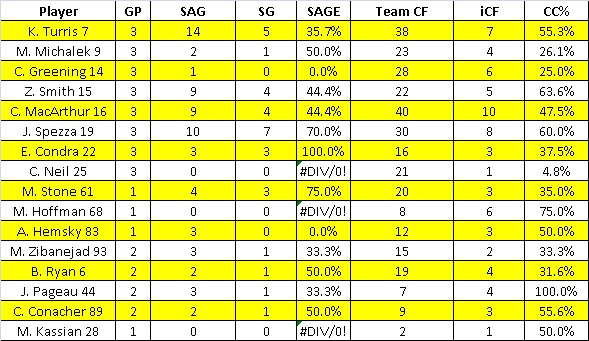 Matt Stone played in only one game against the Devils this past season, but was very efficient. He generated three shots on four attempts. Zac Smith put up identical passing stats to MacArthur (four shots on nine attempts). 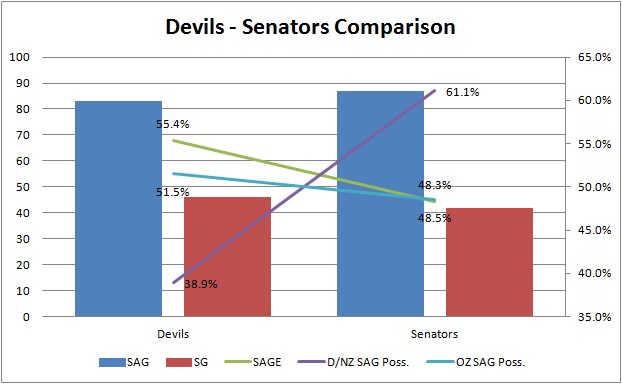 The Devils were actually more efficient than the Senators (55.4% to 48.3%), but once again gave up a considerable amount of offense in the transition game (61.1% to 38.9%). The teams’ were quite even in offense generated in the offensive zone. The Senators were one of the few Eastern Conference teams to generate more offense via their passing than the Devils in their head-to-head matchups. 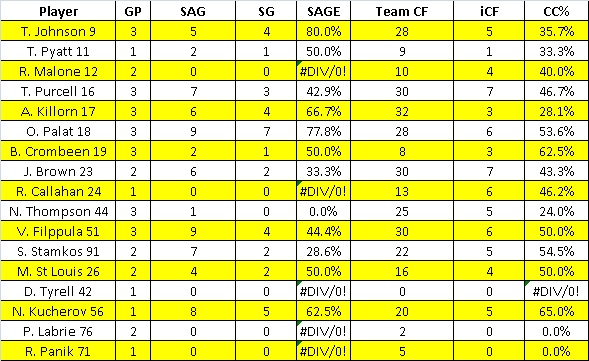 The Tampa Bay Lightning should probably win a Cup in the next couple of years. They have so many good, young forwards it’s not even funny. Ondrej Palat generated seven shots on nine attempts and contributed to 53.6% of the team’s Corsi while on the ice. Nikita Kucherov, in one game, generated five shots on eight attempts and attempted five shots of his own. Tyler Johnson generated four shots on five attempts. Alex Killorn generated four shots on six attempts. This is just a very efficient and talented team.

Oh yea, then they have some guy named Steve Stamkos and Jonathan Drouin hasn’t even played in the NHL yet. So glad they aren’t in the Devils division. 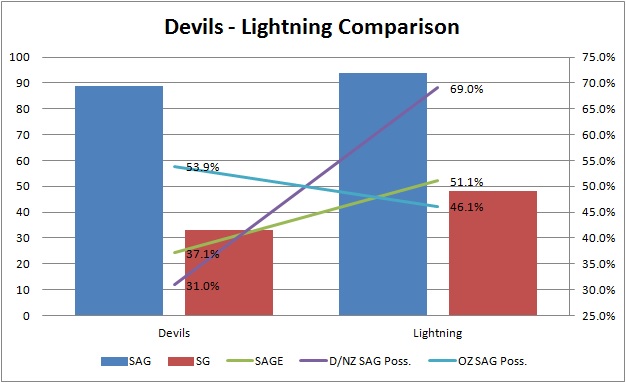 The Lightning controlled 69% of the transition shot attempts and nearly evened out with the Devils in offensive zone shot attempts generated (46.1% to 53.9%). They were 14% more efficient than the Devils.

As I mentioned in the opening paragraph, with more data comes more concrete analysis. As any statistical work should do, this process evolves and becomes more refined based on what is most relevant. After compiling all of this data for a season of the Devils and their opposition, I’ve discovered that about 10% of the tracked data tells us 90% of what’s relevant. By this I simply mean passes that lead to shot attempts and shots tell us far more than the passes that do not lead to events. I’ve decided to change up my approach for the coming season.