This is a look at the divisional matchups for the New Jersey Devils and how well both they and their opponents generated offense via their passing. Read on for the details.

Share All sharing options for: 2013 - 2014 Devils Passing Review: Devils Vs The Metro Division

This is a look at how the New Jersey Devils and their divisional opponents fared in their matchups this past season. As I’ve written a lot on the Devils with obvious reasons, this post will focus more on the opposing players. Since the sample size for these players and teams is only from two to five games, we’ll treat this as "What Players/Teams were the Devils able to contain?" and also, "Which Players/Teams had their way with the Devils?" In the interest of brevity, on an individual level, I’ll be looking solely at shot generation and Corsi contribution; on a team level, I’ll be looking at efficiency and where shots were generated from.

Against the Devils, the Rangers blue line managed to generate thirty-six shot attempts (SAG) and thirteen shots (SG) for roughly 33% Shot Attempt Generation Efficiency (SAGE). The team generated their highest shot attempts with Marc Staal on the ice (64 Corsi Events For, CF), and Staal contributed to a third of those attempts himself (Corsi Contribution Percentage, CC%): six SAG and fifteen of his own shot attempts (individual Corsi Events For, iCF).

Dan Girardi actually led the blue line with eighteen shot attempts of his own, generated six shot attempts, and finished with the highest CC% of Rangers defensemen at 39.3%. Ryan McDonagh contributed to the same percentage as Staal. These three defensemen were the most involved for the Rangers. 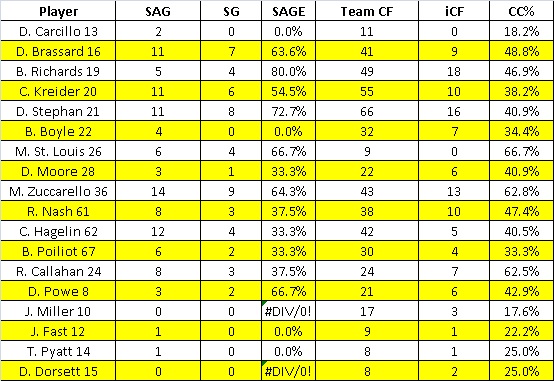 Moving to the forwards, we see that the when the Rangers had Derek Stephan (72.7%), Mats Zuccarello (64.3%), or Derek Brassard (63.6%) passing the puck, they were at their most efficient. All three totaled over 10 SAG, as did Chris Kreider (11) and Carl Hagelin (12). Zuccarello generated the most attempts (14) and shots (9) as the Devils couldn’t quite contain him.

Looking at players who were on the ice for at least forty CF, Zuccarello (62.8 CC%, Brassard (48.8 CC%), and Brad Richards (46.9 CC%) were the most involved in the team’s offense in terms of shot attempts going they contributed to. 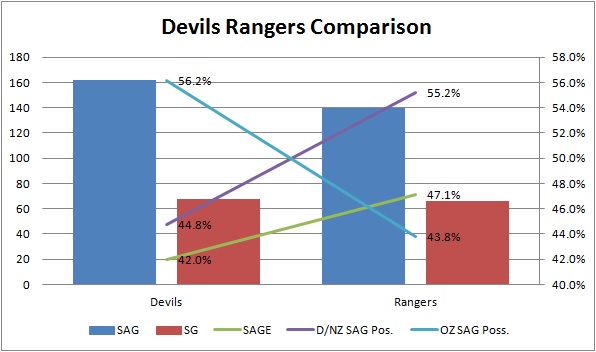 In their four games against the Devils, the Flyers blue line began and ended with Kimmo Timonen. Timonen generated fourteen shot attempts and ten shots for a 71.4% SAGE, and he also contributed to 46.5% of the team’s shot attempts while on the ice. Nick Grossman was the next best Flyer (indicative of how poorly run that team is) in terms of Corsi contribution, but the Flyers back end is a mess. 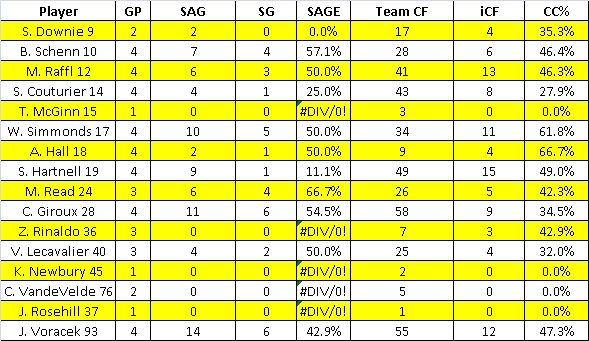 On the other side of this are Sean Couturier and Brayden Schenn. When Couturier was on the ice the Flyers had forty-three shot attempts, but he was only involved in twelve of them. Schenn was more involved, but the Flyers attempted only twenty-eight shots while he was on the ice. 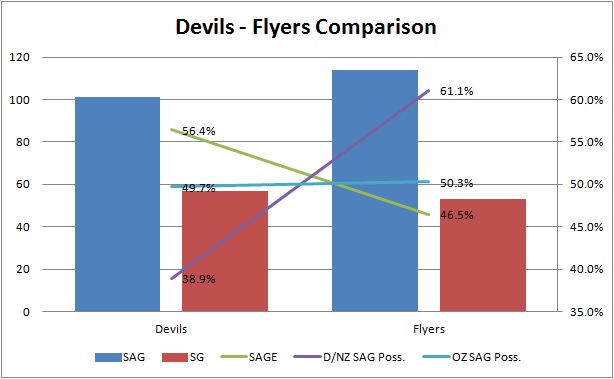 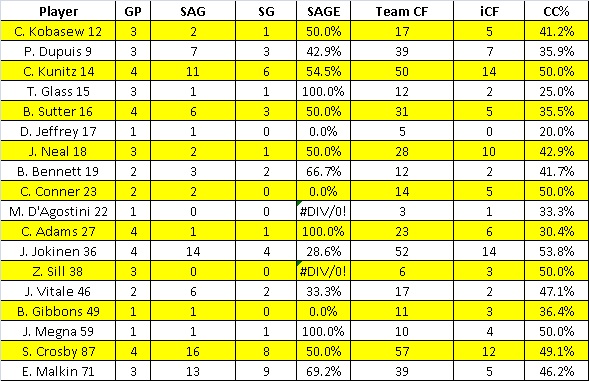 No surprise to see Sidney Crosby (16), Evgeni Malkin (13), and Chris Kunitz (11) among the forwards leading the Penguins in terms shot attempts generated. A name you may not have expected to see is that of Jussi Jokinen who generated fourteen shot attempts and attempted fourteen shots of his own. When Jokinen was on the ice he contributed to just over half of the Penguins fifty-two Corsi events (53.8%), which was more than any other forward on the team.

Moving to efficiency, Jokinen drops off significantly as only four of the fourteen shot attempts he generated found their way to the goalie. Malkin (69.2%), Kunitz (54.5%), and Crosby (50%) all had solid SAGE figures. Unfortunately for the Penguins, the rest of their forwards are a mess. 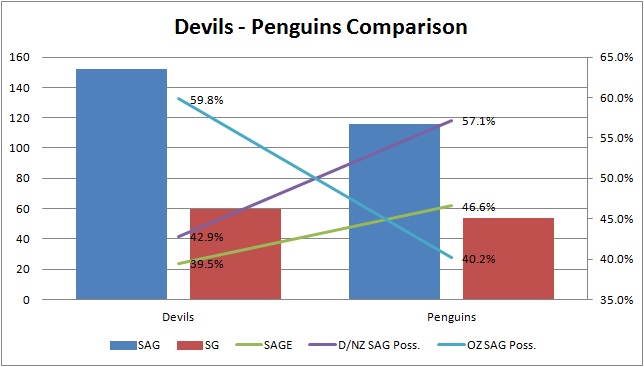 The Devils put up some of their worst displays in terms of efficiency in their four games against the Penguins, managing a pathetic 39.5% SAGE figure. The Penguins were not great at 46.6%, but far better than the Devils. Same old story, another team is more efficient and another team controls the larger share of shot attempts generated in transition.

The Islanders dressed ten defensemen in their five games against the Devils this past season. Only Travis Hamonic reached double digits in SAG (11). Hamonic, unsurprisingly, was most involved in the Islander’s offense as he contributed to 36.5% on the team’s Corsi Events. Thomas Hickey generated eight shot attempts and attempted fourteen of his own. Unfortunately for the Islanders, their efficiency looked about as appealing as a TV broadcast from Madison Square Garden. Positionally, they finished with a 36% SAGE, which is terrible. 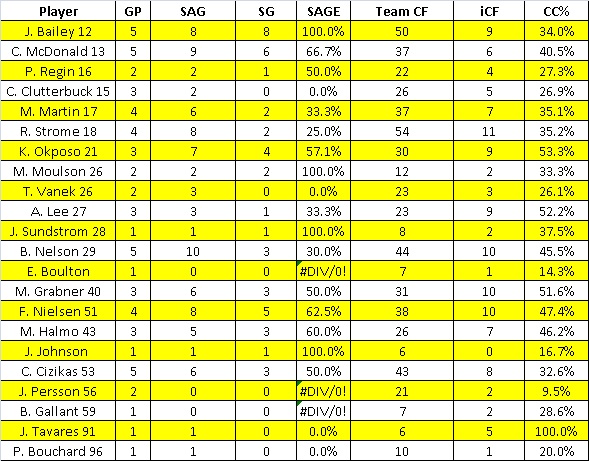 In terms of volume, Brock Nelson led the forwards with ten shot attempts generated. Only three, however, registered as shots on goal. More efficient players were Josh Bailey who generated eight shots on eight attempts. I think he’s an tremendously underrated player. Colin McDonald generated six shots on nine attempts. Frans Nielsen generated give on eight attempts. So, overall, the Islanders were far better at forward than they were on the back end. 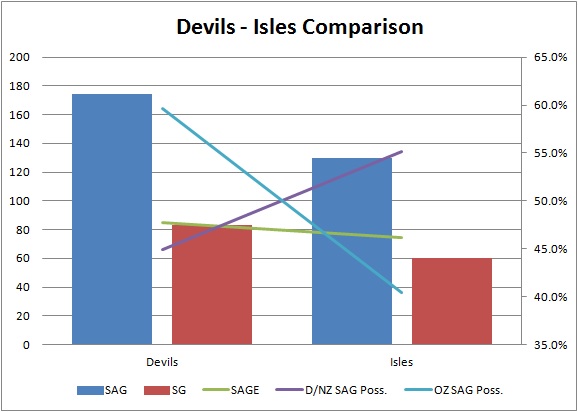 The teams were about even in terms of efficiency, hovering just above the 45% mark. Once again, the Devils opposition generated more shot attempts in transition and the Devils controlled play in the offensive zones. This seems to be a common theme, so as I collect more data in the coming season, I’ll be looking for tendencies or how teams set up to defend and attack the Devils. We know what happens, but we need to know how and why.

Ryan Murray was easily the Blue Jackets’ best passing defensemen when it came to generating offense (11 SAG, 8 SG). No Columbus blue liner contributed most to the team’s Corsi events than Murray (42.1%). Jack Johnson doubled the next highest iCF total on the blue line and James Wisniewski generated nine shot attempts, but only three registered as shots on goal. Wisniewski was involved as often as Murray, but less efficient. 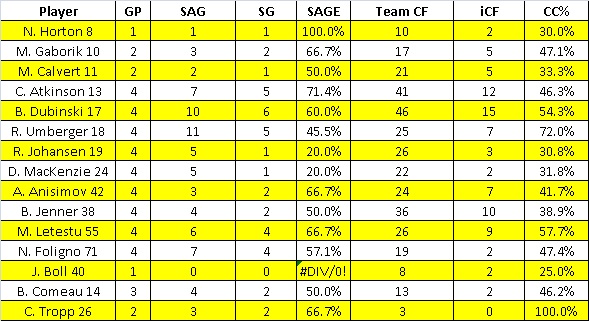 Brandon Dubinsky enjoyed playing against the Devils this past season. In his four games he was involved in 54.3% of the team’s Corsi events: ten via pass and fifteen from his own shot attempts. R.J. Umberger had some success against the Devils as well, but the team didn’t generate as many Corsi events when Umberger was on the ice.

Cam Atkinson (12) and Boon Jenner were (10) the second and third best forwards in terms of their iCF volume. Both were more shooters than passers, reaping the benefits of the passing of Dubinsky and others. Mark Letestu generated six shot attempts and attempted nine of his own, and was involved in over half the Corsi events while on the ice, not bad for a bottom six forward. 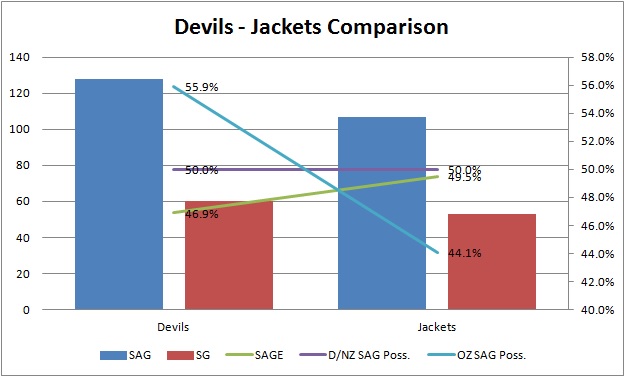 The Devils controlled the shot attempts generated via passing against the Jackets, but were a few percentage points behind in efficiency.

The Capitals had one of the worst blue lines last season according to the data I’ve tracked. They generate very little via their passing with Dimitry Orlov and Karl Alzner leading the group with four SAG each. That’s simply not good enough and it puts a lot of pressure on the forwards. John Carlson and Orlov at least were contributing via their own shot attempts (10 each). 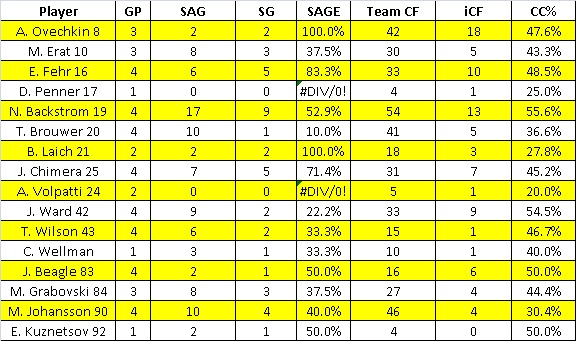 Troy Brouwer (10) and Marcus Johansson (10) were the only other forwards in double digits in shot generation, though Brouwer only saw one of his attempts register as a shot and Johannson saw four do the same. Not the greatest efficiency there. 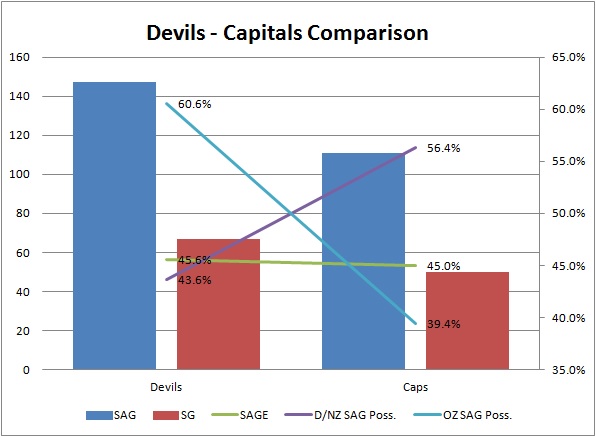 Ryan Murphy generated seven shot attempts and another seven from his own shot attempts. Ron Hainsey was second behind Murphy with five SAG. The Canes defensemen had a combined SAGE of just under 40%. 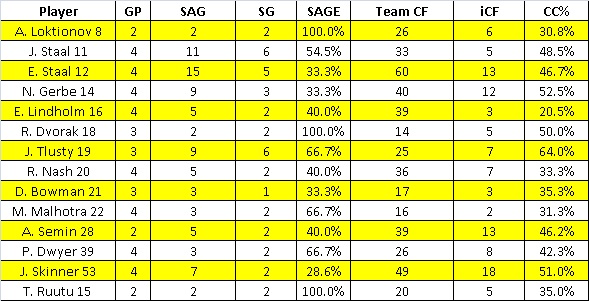 Jordan (11) and Eric (15) Staal led the team in shot attempts generated with Nathan Gerbe (9) and Jiri Tlusty (9) tied for third. Jeff Skinner led the team with eighteen of his own shot attempts. Of players on the ice for forty or more Corsi events, Gerbe (52.5 CC%), Skinner (51 CC%), and Eric Staal (46.7%) is how they ranked in terms of Corsi involvement. 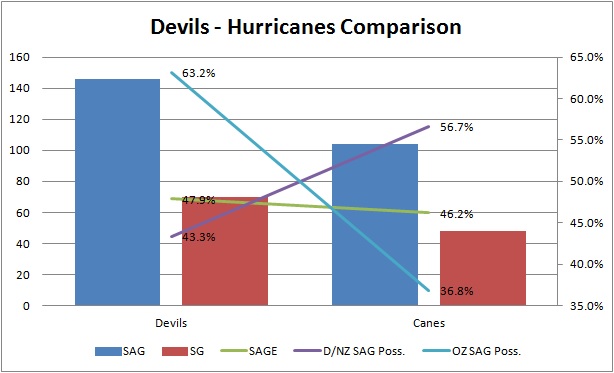 The Devils played against the Hurricanes in much a similar fashion as other opponents: controlling offensive zone shot generation and falling behind in transition shot generation. The efficiency was about the same for both teams.