This is a look at how much possession matters during a hockey game as well as how the New Jersey Devils compared on a team-level to their opposition. Read on for the details.

Share All sharing options for: 2013 - 2014 Devils Passing Review: Possession and a Team Comparison

This is a comparison of the Devils as a team to their opposition this past season. Previously, these articles have been focused on players. This one will focus on how well the Devils as a team compare across a variety of statistics. All statistics and findings you see here are from a passing experiment using the Devils and their opposition as a case study to determine which statistics offer value in analysis. They are not to be taken as gospel across the league or teams I have not tracked in full as of yet.

Something I want to discuss first, before I put up the winning correlation chart you’ve all memorized by now, is possession. Controlling pass attempts by zone shows us which teams control most of the play and overall possession. There are several hundred pass attempts per game as opposed to maybe a hundred combined shot attempts, so using passes to measure possession is a truer sense of who had the puck more.

How the Devils Measure Up

To start, I’ll take the five stats that correlate closest to winning percentage and we’ll compare the Devils and their opposition in those categories. Those stats are Shot Attempt Generation Efficiency (SAGE), both overall and by zone, shots for as a percentage of Corsi for (all shooting attempts), larger possession share of shots generated via passing (SG), Neutral Zone completion percentage (NZ%), and larger possession share of shot attempts generated in transition (passes originating in the defensive or neutral zones that precede shot attempts, or D/NZ SAG).

As you can see, the Devils do not look good at all. They are not as efficient as their opposition, whether that’s in the transition game or once they establish their forecheck and cycle game. They miss the net or have more shots blocked than their opposition in general, not just those generated via passes. The Devils are really behind in transition shot attempts.

The Devils are much closer in terms of neutral zone completion percentage, but still behind their opponents. The one are the Devils excel is controlling the larger percentage of shots generated via passes. Of course, when you only win one of seven categories, chances are you’ll not be a very good team.

Frequency of Events as a Team 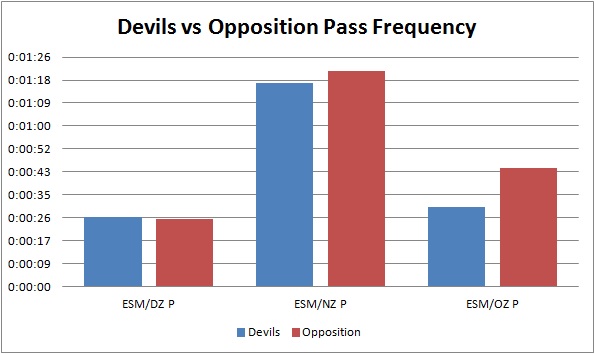 Now that we’ve seen the Devils are, primarily, a better possession team than their opposition, let’s see what they did with all of that possession. 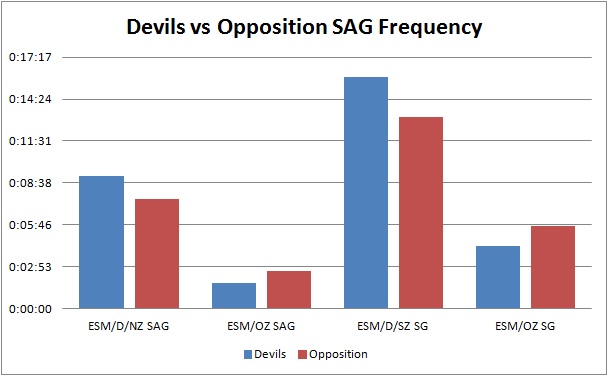 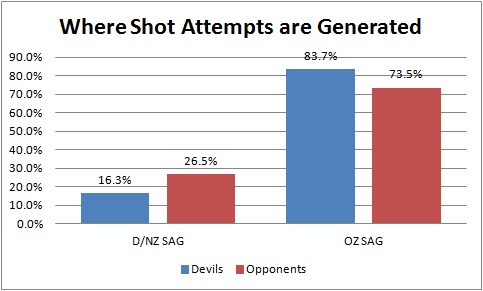 Another way to look at this production is see how much of a team’s offense comes from each zone. In the above chart, you’ll see what percentage of the Devils offense comes in transition versus what is set up in the offensive zone. The Devils generate only 16.3% of their shot attempts in transition. Their opponents generate 10% more. There’s a big reason why the Devils failed to score, or even register shots on goal for much of the season. I covered this a bit earlier in the series, but now we’re going to look at who’s to blame.

This chart tells us how, positionally, the Devils compared to their opponents in terms of what percentage of offense was coming either in transition or in the offensive zone. Let’s look at the defensemen first.

While the forwards (18.3%) are still a bit behind the opposition forwards (26.8%), the Devils defensemen (29.4%) are way behind their opposition (46.4%). The Devils clearly aren’t getting enough help from their backend in the transition game. Is that the team’s skill? Is it a function of how they play? It’s probably a bit of both and I believe that a full season of Larsson, Gelinas, and Merrill and the departures of Volchenkov and Fayne will help to improve this. But for this past season, more blame can be laid at the feet of the Devils defense for their offensive woes.

Much of this data confirms what Devils fans suspected: the team controlled play in the offensive zone and possessed the puck more than their opponents, but failed to do much with all of that possession. It’s interesting to isolate phases of the game and see how players thrive in certain situations (Zidlicky in transition) and are more of a liability in others (Zidlicky’s defensive zone completion percentage). With more data to come next season, there will be even more data points to evaluate players in a deeper level and give us a more accurate picture of what’s happening on the ice and who is contributing to a team’s offensive production.

So, after this series introducing many of the ways to look at the data unearthed by tracking passing and shot generation statistics, what are your thoughts on all of this? I’ve mentioned that I’ll be tracking new data involving scoring chances and potential second assists for the upcoming season, but what are new ways we can look at this? How was this presented? I tried to do it in smaller chunks as a lot of it is brand new, so let me know what you got hung up on or what made sense.

This is just the beginning. I’ll be doing updates and in-depth posts during the season and how we look at this data may change, but I wanted to use time this summer to present this and get people’s feedback. Recently, people have reached out to me expressing interest in joining in on the tracking, so we’ll see how that goes. The more eyes we can get on tracking this data the better.

For the rest of the summer, I’ll have four more pieces up that go over how the Devils and their opponents matched up during the season. There will be one post for each division.