NHL Equivalencies are a fun way to compare prospects that haven't experienced the NHL yet. This post will take a look at how the Devils prospects have fared in their amateur careers.

I was inspired by our neighbors at Arctic Ice Hockey, SB Nation's Winnipeg Jets blog, to do a fun post on NHL Equivalencies.

NHL Equivalencies (NHLE) were developed by hockey statistic pioneer Gabriel Desjardins of Behind the Net to give us an idea of how a player outside of the NHL would perform in it based on his counting numbers (points). Desjardins extensively outlined his methods on assigning NHLE values to various professional and junior leagues in this post. One of the benefits, and the main reason I find NHLE's fun, is the ability to compare prospects in one league to prospects in other leagues based on their NHLE's. This is because NHLE's allow for standardized scoring across leagues and in general, prospects who produce in the lower levels tend to be more successful to play in the NHL than those who don't produce in juniors or college. Of course NHLE is more suited for forwards but we will look at the defensemen too. The formula for NHLE is very simple:

NHLE's have some predictive value but that still doesn't mean that they are always going to be accurate. When working with any counting number statistic, things like shooting percentage, PDO, and usage can sway the results and be misleading. NHLE's help give us a general idea of how prospects compare to one another and what potential they may hold.

I want to note that in the charts below that "Draft" refers to a prospects initial draft eligible season and not the year that the Devils drafted them. This is to better compare how the players stack up against each other from an age perspective. 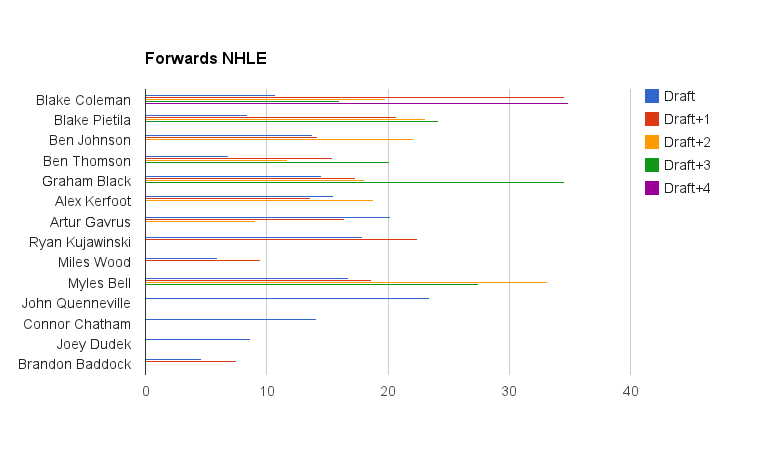 There were a ton of forwards so it does get a bit messy. Right click view image to see the chart better. I'll comment on each of these forwards below where the charts will be cleaner. I just wanted to show the forwards from all the various draft classes together. Coleman, Black, and Bell stand out but what really pops out to me is Quenneville's strong draft year. 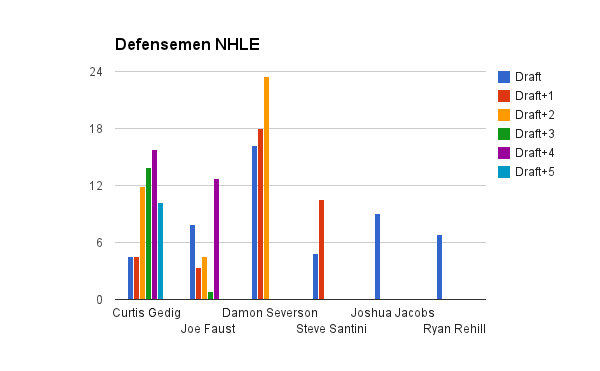 I'll touch on each of these players below but it's clear that amongst the defensemen that Severson has best offensive game. 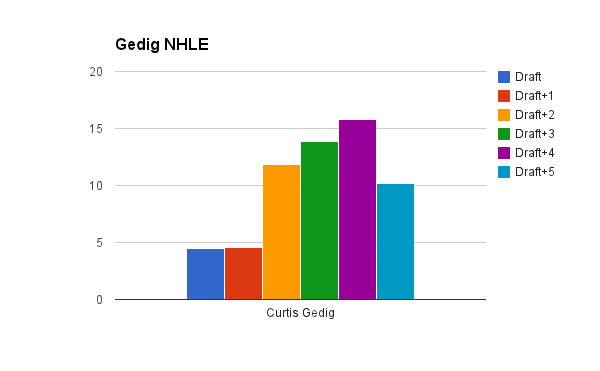 Defenseman Curtis Gedig is the lone prospect from the 2009 draft class that either hasn't played in the NHL or AHL or been let go. The Devils recently signed the former Ohio State captain to an AHL deal. It's been a long road for Gedig after multiple seasons in the BCHL and four years in college. Looking at his NHLE's, we can see that his point production seemed to pick up once he got to college. He did get a lot of power play time for Ohio State which is where a lot of his point production came from. 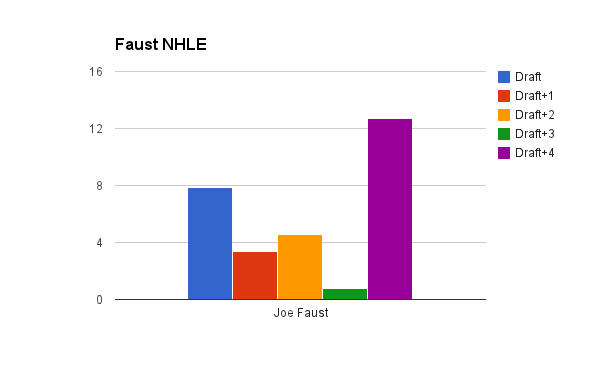 Defensemen Joe Faust was also signed to an AHL deal recently. Like Gedig, he is the only skater in his draft class to not either experience professional hockey or have his rights relinquished. Looking at his NHLE's, it's clear that his offensive game in high school didn't carry over to college hockey and that it wasn't until his senior year that he was able to produce more in an expanded role. Given his lackluster college career I wouldn't expect him to put up that many points in the AHL. 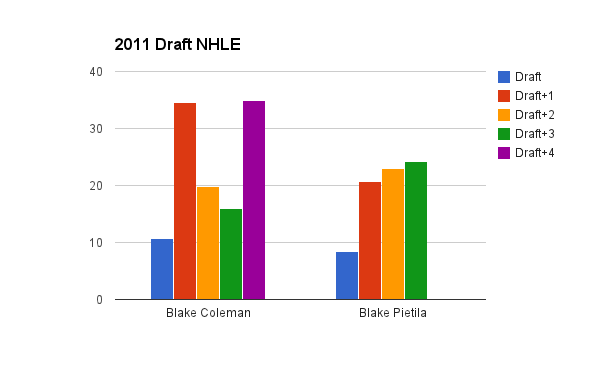 The 2011 draft class has been a mixed bag, from the promise of Adam Larsson to the early retirement of Patrick Daly. While Reid Boucher and Reece Scarlett have already been developing in Albany, the two Blakes, Blake Coleman and Blake Pietila have been plying their trade in the NCAA. Coleman's breakout junior season for Miami gave him an NHLE of 35 which is the same mark he had when he broke out in the USHL as an overager in 2010-11 which led to the Devils drafting him. Looking at Pietila's Draft+1 thru Draft+3 seasons it's clear that he has been consistent for Michigan Tech. Both of the Blakes will be entering their senior seasons and expected to rack up the points for their respective teams. 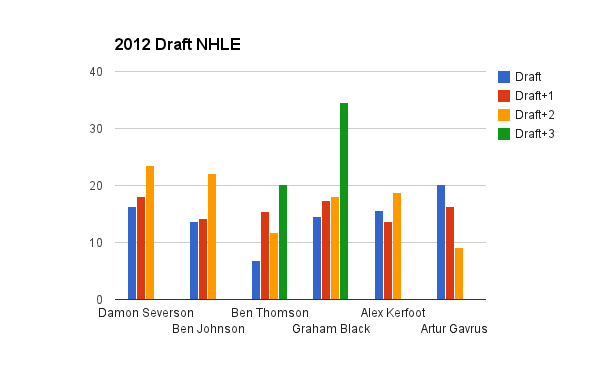 The 2012 draft class is interesting as it will send four new players to Albany this season. Judging strictly off NHLE's, two way defensemen Damon Severson has seen a steady progression in his point contributions during his WHL career. Winger Ben Johnson didn't break out until this most recent year but managed to do most of his damage at even strength. Fellow OHL left wing Ben Thomson didn't have great numbers for a forward until this year, which was aided by his trade to North Bay and opportunity to play the power play. Center Graham Black tore up the WHL in part to improved health and being one of the oldest members of the league. Still it is encouraging to see that his NHLE's have steadily risen over his junior career. Forward Alex Kerfoot has struggled to stay healthy both in his BCHL days and his first season of NCAA play for Harvard but put up a solid 19 NHLE as a freshman. Unfortunately, center Artur Gavrus seems to have regressed with his move from the OHL to KHL. 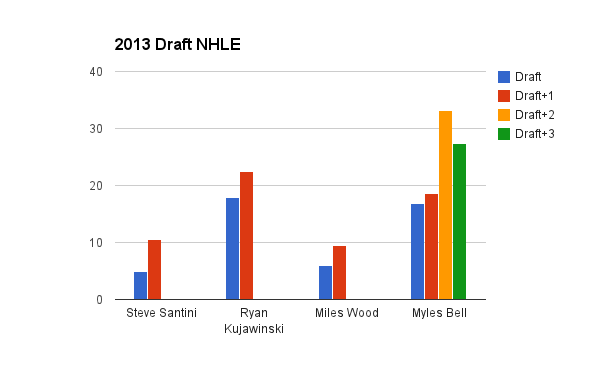 Defenseman Steve Santini saw a jump in his production as he played on a stacked Boston College team. His NHLE of 11 as a freshman is encouraging for a guy scouting reports said wouldn't be a point producer. However, I'm skeptical of how much of that is aided by playing with great offensive talent around him. Center Ryan Kujawinski showed solid improvement in his Draft+1 year. Forward Miles Wood has dominated prep hockey for Nobles and Greenough and should do so again this year as a 19 year old. It is notable that he will play fall hockey with the South Shore Kings of the USPHL to get more games under his belt before his prep season starts. Right Wing Myles Bell saw a big jump in his production once he switched from defense to forward. His NHLE went down a bit last year but was still impressive. As had been said before, he has a pro slap shot, but can he develop the rest of his game? We will see how he does in Albany this year (though his signing is yet to be confirmed). 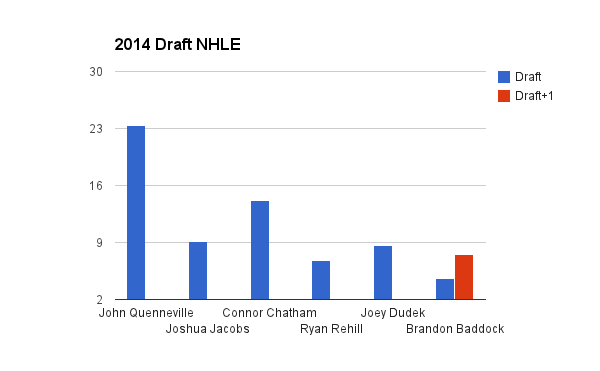 Unsurprisingly, Devils 1st round pick, center John Quenneville, leads the 2014 draft class with a NHLE of 23. Defenseman Joshua Jacobs put up a decent amount of points in the USHL last year and it will be interesting to see how he does at Michigan State this upcoming season. Right Wing Connor Chatham put up a decent 14 NHLE for a 3rd rounder in his draft year. As expected by the reports during the draft, neither Ryan Rehill or Brandon Baddock seem to have any offensive upside. I'm intrigued to see what 2014-15 brings raw center Joey Dudek as he just dominated prep hockey with 1.76 Pts/GP and there is even some speculation that Boston College may be desperate enough to bring him in for this season due to Sonny Milano signing with the Blue Jackets. Dudek reminds me a bit of Kerfoot, somewhat unknown heading into college but has some offensive potential.

How do you feel about NHL equivalencies? Is this a statistic that interests you? Are there any prospects that surprised you with their NHLE's? Leave your comments below and thank you for reading.