This is a look at how the New Jersey Devils skaters contribute to Corsi via their passing and shooting. Read on for the details.

During the season, I introduced a new stat called "Corsi Contribution" (CC%) which broke down how much a player’s Corsi (all shooting attempts) was the result of his shooting and passing. In this article, I’m taking a look at how the New Jersey Devils skaters contribute to Corsi in comparison with their opposition. Let’s get to it.

What is Corsi Contribution?

Corsi tells us what happened, but does little to explain the "why" and the "how" of it. With Corsi, you wonder why that player’s Corsi is higher than others, and what do they do to make it so much better? Corsi Contribution breaks down Corsi into three different components: 1) Individual Corsi For (iCF; a player’s own shot attempts); 2) Shot Attempts Generated (SAG; the final pass preceding a shot attempt); and 3) Secondary Assist Shot Attempts Generated (A2 SAG; the penultimate pass preceding a shot attempt).

This piece will discuss iCF and SAG figures, as A2 SAG figures will be tracked starting with the upcoming season.

The simplest thing CC% does is illustrate whether or not players generate their Corsi totals from predominantly passing, shooting, or a mix of both. Let’s have a look at the Devils skaters and how they contributed.

The green bar represents the percentage of total on-ice Corsi events that player contributed to. So, of the 1147 Corsi events at even strength for Marek Zidlicky, he contributed to 31% of them. Slightly more than half were via his passing, the only Devils defensemen to have his SAG exceed his iCF. Consistent through all of these articles, Zidlicky is a distributor. Only Eric Gelinas exceeded Zid’s 31% CC% as the rookie finished the season contributing to 33.2% of the Corsi events while on the ice. Notice the differences in how they do it, though: Zidlicky was pretty even between iCF and SAG; whereas Gelinas’s Corsi production depends heavily on his iCF. Corsi misses this distinction.

Andy Greene and Mark Fayne were a regular duo during the 2013 – 2014 season, yet Greene found himself contributing to 2.7% more of the team’s offense than Fayne. Their ratios were nearly equal in terms of how they contributed. Of course, looking at percentages without volume doesn’t quite give an accurate reading of everything. Naturally, some players will have higher totals due to how often they played, so I’ve taken everyone’s total contributions and looked at how many contributions they had per twenty minutes of ice time. 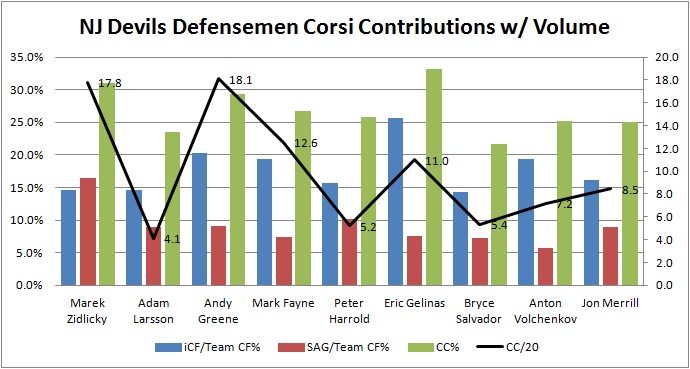 Now we see a more accurate picture. Zidlicky and Greene lead the way in terms of volume, as Adam Larsson, Peter Harrold, and Bryce Salvador’s percentages look even smaller considering the volume. What this does it paint Harrold in the proper light: he contributes two fewer Corsi contributions every twenty minutes than noted puck-mover Anton Volchenkov. I like to think of him as the Stephen Gionta of the blue line: occasionally does something nice, but when you step back and look at the larger picture, it’s sobering.

Fayne had the third best CC/20 rate, slightly better than Gelinas. So, the way to read this is that Gelinas contributes to more of the Corsi events on the ice than Fayne does, but Faye contributes more often. What can we conclude from this? Well, Fayne is on the ice with other players that eat into his CC%: Greene is case and point. It’s important to look at both percentage and volume to arrive and an idea about how much and how often a player contributes to Corsi.

Let’s have a look at the forwards.

Before you start thinking all of the Devils defensemen don’t contribute often enough, forwards contribute to more on average. It’s also more pronounced among the forwards to identify candidates for being passengers on certain lines. For example, take a look at Jaromir Jagr (52.1%), Travis Zajac (42.9%), and Dainius Zubrus (37.7%). Clearly Jagr was more involved than the other two based on his CC%. We know Zajac was equally involved in generating attempts, but just didn’t shoot as much as Jagr. However, considering these two were together more often than not this past season, this shows the a gap in how often one or the other was involved in a shot attempt. There’s a further gap with Zubrus, as he represents a player whose had others eat into his CC%. At the end of the day, there’s only one puck. Now, these three didn’t play together the entire season, but it doesn’t paint Zubrus in the best light, having a CC% lower than Gionta and tied with Jacob Josefson.

Patrik Elias (50.7%) was the only other forward to account for over half of the Corsi events while on the ice. Elias may not be as dominating as Jagr, but I don’t think there’ s a more effective forward at producing no matter who is on the ice with him. Most forwards settled in the high 30/low 40s range for CC%. The player who was the most involved in Corsi events after Elias and Jagr? Steve Bernier (45.1%). Before all of your heads explode from that, let’s bring in the volume chart. 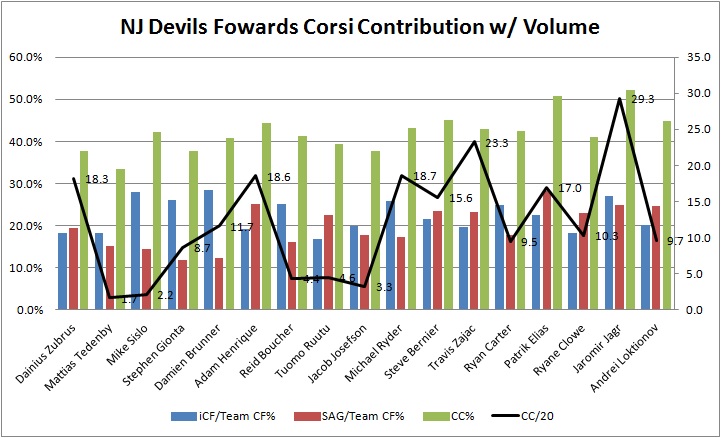 Okay, so Zubrus isn’t so bad. His 18.3 CC/20 rate is fifth on the team. His CC% simply gets artificially lowered from playing with Zajac and Jagr. On the flip side, Bernier’s 15.6 CC/20 rate, while impressive given his role and teammates, is not as high as his CC% advertised. Still, Bernier is a fourth line forward contributing to Corsi events as the seventh best forward. That’s not a bad deal.

Some players will have lower totals based on the time they spent with the club, but even when looking at Tuomo Ruutu, who looked decent coming over from Carolina at the trade deadline, had a CC/20 rate nearly identical to Josefon’s. He was more of a passenger than impact player.

What we have below is a chart similar to those above, with a few additions. Each colored bar has a corresponding line that measures the average contribution percentage of the opposition (respective to position). I’ve also included the raw contribution totals as opposed to the per-twenty rates.

You’ll see that the Devils defense has several players exceeding the average iCF/CF% of the opposition, which goes to the style of play: the Devils are heavy forechecking team that generates a great deal of shots from the point.

Let’s look at the forwards.

Indicative of a strong possession team more reliant on production from the forwards than defense (OZ LINK), the Devils have several forwards exceeding the CC% average of their opposition. Compared to the opposition forwards, Elias, Jagr, Zajac, Bernier, Ruutu, Ryane Clowe, Andrei Loktionov, and Adam Henrique each generate a greater percentage of their offense via passes than the average opposing forward.

In the coming season, I’ll be adding offense generated from the scoring chance area as well as offense generated from potential second assists, so there will be even further breakdowns in Corsi that we can analyze among players. With this article, we see the evidence of a strong, overall possession team as many of their forwards exceeded the averages of their opposition. Unfortunately, the blue line was below average overall, lending further evidence that the Devils are a team reliant on production from their forwards, either by design or by skill.

This was the fifth article in a summer series looking at all of this data. What did you think of this data? What methods could be employed to improve the process? Give me your questions, statements, feedback so I can better steer this towards where your interest lies. Sound off below!