Who's Scoring? Projecting the Devils' Goals for the 2014-15 Season

With most of the Devils' roster now settled heading towards next season, have they done enough to get this offense where it needs to be? How many goals should we be expecting them to put up?

Share All sharing options for: Who's Scoring? Projecting the Devils' Goals for the 2014-15 Season

Last offseason, when the initial dust settled from free agency, I took a look at how many goals we might expect the Devils to score in the 2013-14 season. Now, that particular projection was rendered obsolete by the Kovalchuk retirement bombshell days later, but overall, the particular prediction method turned out to be okay. So I'd like to employ a similar approach to get an idea where this team stands in terms of goal-scoring for the upcoming season. There could still be some moves in the works for this team before the season starts, but there will probably not be any departure (or addition) on the magnitude of last summer's craziness.

So in last year's model, I projected players' shot outputs based on shots per game rates from the previous four seasons and adjusted the numbers slightly for age. Then career shooting percentages were used to predict how many goals we might see from that player over an 82-game season. Once that was all figured out, the total numbers were adjusted down to account for the impact of injuries to starters. Here are the numbers from last year's forwards projection, compared to their actual scoring rates:

Most were at least in the ballpark here. The new guys were a little off in general, as Ryder and Clowe were both short of the projection (and Jagr/Brunner's projections would have both overestimated output as well), but Devils incumbents are pretty close in general. Steve Bernier, as he is wont to do, kind of ruins everything, but unless there was a way to predict he was going to shoot 2.9% last season, it's a reality of trying to project results. Plotting projected vs. actual goals/82 gives us this: 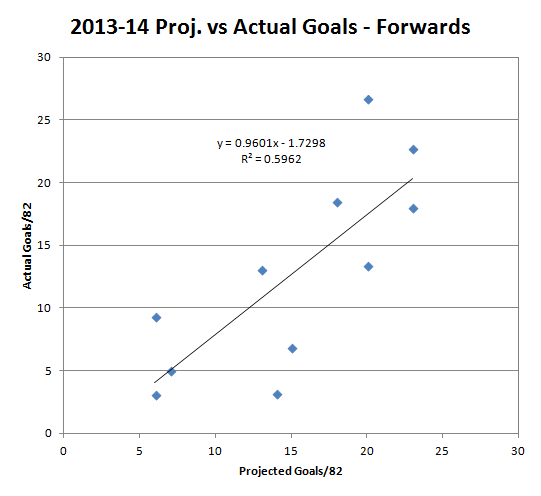 The slope of the trendline is pretty close to 1 (1 projected goal = 1 actual goal), meaning the projections are pretty well distributed versus what happened, but the intercept is between -1.5 and -2 means they were generally a bit high. It's a little noisy, so the R-squared value shows us that the projections were only about 60% predictive of results. Not great, but manageable, so we'll try to tweak things.

For the defense, things are a little messier, since the samples are small, but it still wasn't too bad overall. Greene and Zidlicky overshot things with better than typical shooting and Harrold and Volchenkov underperformed by shooting 0%. The plot shows how the trend is a bit off, but I think it's mostly a product of trying to project numbers in the 2-4 goal range that makes it so wonky. 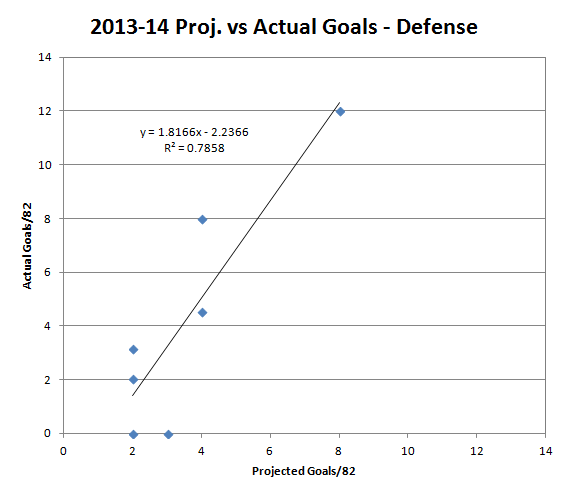 So, after taking a look at last year's results there will be a couple of minor tweaks to this year's system. First, rather than going by shots/game rates, we'll use shots/60 so things can be tailored to a player's usage based on a predicted TOI number. Second, I'm going to introduce a bit of a "Devils factor" for players that have just joined the team or joined last season to account for the somewhat likely event that their production takes a bit of a hit in NJ. So the parameters are as follows:

First, we'll predict what we might see from the Devils' group of forwards. Like last offseason, the model will just go with what projects to be the top 12 forwards on the current roster. In terms of TOI, Zajac and Jagr are likely to see the most of the group, with Elias, Henrique, and Cammalleri good bets to get significant minutes as well. Beyond that, it's kind of muddled, but I think Havlat is likely to have his minutes limited due to injury concerns and Zubrus, Gionta, and Brunner are the de facto fourth line at the moment. Bernier and Josefson get the scratch treatment right now, leaving this projected lineup:

So the offense isn't quite back at where it was projected to be with Ilya Kovalchuk last offseason, but it's only a few goals short at 200 (versus 204). Nobody projects to put up a 30-goal season from this group, but there is a pretty decent scoring-by-committee foundation here. The "Devils factor" inserted into the model tempers expectations for Cammalleri a bit, but he still figures to be a solid addition to the top line. Overall, it seems like a decent, if unspectacular, group, in terms of scoring.

Last season, the scoring projections for the Devils' defense were pretty bleak, as Marek Zidlicky has yet to re-sign and the young defensemen in Albany were still very much an unknown quantity at the NHL level. With the emergence of Merrill and Gelinas (particularly Gelinas) the scoring from the blue line projects to be a much bigger factor going forward. In terms of TOI, Greene will likely see the biggest minutes, with Jon Merrill seeming like the player who will end up paired with him. The rest should probably see mid-level minutes, save for Gelinas who will probably be sheltered to a certain extent. The projections for the D are as follows:

So there should be a pretty decent output from the defensive corps, especially compared to last year's paltry offseason projection of 17 goals. This still isn't an offensively dominant blue line, but it at least has some punch now and figures to be somewhere near average in scoring.

It's a reality for any team in the NHL that they are going to lose players to injury at various points throughout the season. When players go down, others have to step up into a bigger role, often beyond what they are suited for. To account for reduced production from injuries, we have to scale our projections down by some factor. Per James Mirtle of the Globe and Mail, teams lose about 3 man-games per game to injury on average in a season. That means on any given night, a team is missing about 16.67% of their lineup. Individual injuries will obviously have different levels of impact, but it seems fair to estimate that a team receives about half production in that lineup spot any time a player goes down. That leaves us with a reduction factor of 8.33%. Apply that reduction to the total projected goals (232) to get an injury-adjusted total goals number (213).

[CORRECTION: As pointed out by user wagathis, the total minutes provided for forwards in this projection was overestimated as it was not properly reduced based on PK and 4-on-4 time. Figuring in reductions for situations that feature less forwards, time on ice is reduced by between 6 and 7 minutes for the group of forwards per night. Applying that reduction across all forwards reduces each forward's TOI by a little over 30 seconds. This brings the total projection down by 7 goals, to 206.]

Using this model, the Devils are projected to make at least a modest improvement on offense this upcoming season. The total adjusted number of 213 206 goals still lands them in the bottom half of the league in the most recent season, but it puts them much closer to average than they were. Neither the forwards or the defense will be top-flight on offense, but they should both be serviceable enough that the team can take a step forward in terms of scoring goals this season.

There is the possibility of another forward move in the works and if someone gets moved and Ryan Carter or someone else is signed, then obviously expectations should be adjusted accordingly. This model also doesn't necessarily account for possible promotions from Albany, chemistry between linemates, and other factors that arise throughout the season, but I think it's a reasonable projection of where things might end up. Personally, given how well they prevent shots and how the overall goaltending seems likely to improve, being close to average on offense should be good enough for this team. The question is whether they can actually meet these expectations and get there.

So how do you feel about the Devils' offense going into next season? Do you think they have improved enough? DO you think the projection produced by this model is reasonable? Any numbers you thought were too high? Too low? Comment with your thoughts below and thanks for reading.