This is a look at what passing statistics correlate more with winning hockey games. Read on for the details.

During last season and over the course of the offseason, I reviewed and tracked passing statistics for the New Jersey Devils and their opponents. I did this to understand how efficient teams were against the Devils and vice versa. Did this correlate with winning? Which Devils were best at it? In this piece, as part of a larger review of passing, I explore these questions.

If you are wondering what exactly I mean what I say "passing stats," then I encourage you to read my primer on them here.

All stats are from even strength situations. All Corsi data was pulled from Extraskater. Let’s get to it.

Below you’ll see a chart illustrating the winning percentage of the team that finished each game ahead of their opponent in the respective stat categories. Basically, if a team won the Corsi (all shooting attempts) battle, how often did they win the actual game? I applied the same logic for several of these passing statistics. These totals represent all stats tracked both the Devils and their opponents and then those totals were compared on an game-by-game basis. 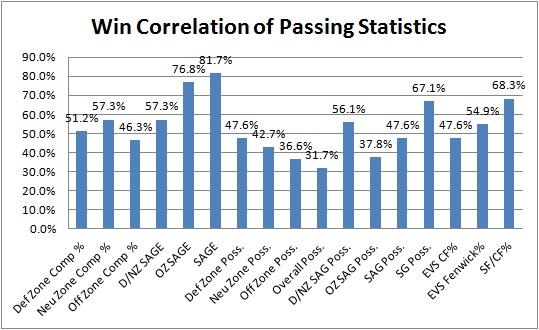 What we quickly see is that the shot generation efficiency of each team was the single-most determining factor in whether or not they won the game. Teams generating shots at a higher efficiency (SAGE) won 81.7% of the Devils games this past season. Now, if you didn’t want to track all of this information, you could simply look at which teams are more efficient at their overall SF/CF% (Shots For/Corsi For), which led to them winning games 68.3%. Of course, if you do that, you lose the individual player data in a passing sense. If SAGE drives winning percentage, we can identify which players are the biggest reasons behind a team winning.

As you can see, SAGE goes a few points higher as do many of the other stats. Shooutouts may impact stats as they correlate to wins, but so will poor goaltending and special teams since I only track even strength stats. Okay, back to the players.

Which Devils are the Most Efficient?

The blue bars represent the SAGE for each Devils defenseman, while the red bar represents the average of every defenseman the Devils faced this past season. At a quick glance, you can see that the Devils blue line was just okay in this department.

I had only begun tracking SAGE around the thirty-fourth game of the season, so as I went back to track the opposition, I filled in what I didn’t do originally. Players like Eric Gelinas had very different seasons before and after Christmas. Gelinas finished the season with a 54% SAGE rating, second only fellow rookie Jon Merrill’s 56.7%. In games thirty-five to the end of the season, his SAGE was only 29.6%, while Merrill’s was 58%. Clearly one rookie hit a wall, while the other maintained his play. Overall both performed well by this metric, but fans may only remember Gelinas for his underwhelming play in the second half of the season.

The green line you see running across the chart is the volume of shot attempts each player generated. This is here to provide context on each defenseman’s efficiency. For example, you’ll that Gelinas and Merrill had the highest SAGE ratings, but provided middle-of-the-road volume. This is due in part to them not playing a full season, but it needs to be noted when looking at their efficiency.

Marek Zidlicky and Andy Greene were at and just below the average of the opposing defensemen. Both were the main distributors, accounting for 43% of the offensive output from the back end via their passing. Zidlicky finished the season with 188 Shot Attempts Generated (SAG) and Greene posted 112, so with a larger sample size than the other defensemen, it’s accurate to say that Zidlicky and Greene both are right around the league average in efficiency.

The only other defensemen above the league average were Bryce Salvador and Peter Harrold, each accounting for about a third of the offense Greene provided. I’d like to see the sample size grow before proclaiming either of them as boons to the blue line in this analysis. Mark Fayne generated the third most shot attempts, but was the least efficient by a considerable margin. I think the Devils will be just fine in replacing him in the lineup. Certainly the volume was solid, but if there’s no efficiency, it’s just empty possession and inflating Corsi totals.

Adam Larsson generated the lowest SAG totals among defensemen. He wasn't all that efficient either, but I feel he'll be more of an A2 SAG producer in the coming season once I add that to the stats I track. I'll touch more on Larsson in the next piece, but as it stands now, Larsson failed to make much of an impact on the offense when he was apart from either Greene or Gelinas. Early on in the season he looked much better and was just sort of "meh" coming back from injury and Albany.

Moving to the forwards brings bad news. Not a single Devils forward finished at the SAGE level of the average opposing forward. The closest were Jaromir Jagr, Patrik Elias, Ryane Clowe, and Tuomo Ruutu. Ruutu actually was a decent surprise after the Devils made a trade for him at the deadline, and I believe he can be an effective forward in the right role.

Mattias Tedenby has seen his last day as a Devil and even though Jacob Josefson re-signed, I'm not sure how much and in what role he'll be used. In fact, I’d rather they had re-signed Andrei Loktionov to center the fourth line, but we know that wasn't going to happen. Why would the Devils have brought back a skilled, young, inexpensive forward when they can play Stephen Gionta? Gionta was the third-worst efficient forward after the two Swedes.

Travis Zajac was quite close to Jagr in terms of volume generated. I hypothesize that both of their SAGE figures will be better this season due to Cammalleri’s arrival. Despite your opinion of him, he is a winger whose talent will improve the efficiency of that line. Dainius Zubrus just wasn’t the quality needed on that line.

Adam Henrique generated the third-most shot attempts, though his efficiency hovered around 42 – 43% all season. Steve Bernier generated more shot attempts than both Ryan Carter and Stephen Gionta combined, and was also more efficient than both. I know he is a target for criticism among Devils fans, but I don’t think you get rid of an inexpensive forward who can generate the sixth-most shot attempts on your team. Especially when generating shot attempts is a problem.

Reid Boucher had a small sample size (34 SAG), but posted a 44% SAGE which, again, was not close to the opposing average of 50.9%, but not a bad showing during his abbreviated first NHL experience. 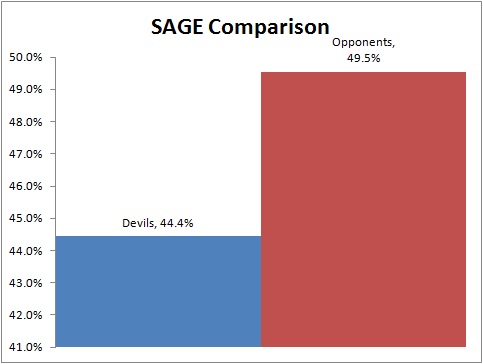 Why are the Devils so inefficient?

This is going to be the focus on this series, to answer what is it about the Devils system and the way they play that puts them at an inherent disadvantage. If SAGE can be a new way to evaluate teams and players, why are the Devils so low? Is it simply a lack of skill? I think that’s part of it, but if their opposition is that much better over an entire season, I find it hard to believe the Devils are the least skilled team in the league.

Things I’ve tracked for both the Devils and their 2014 opponents that will be discussed are: Passing Accuracy in each zone, where shot attempts are generated from, possession in each zone, how often players create Corsi events (attempt a shot attempt or generate a shot attempt), how often players are involved with a shot or a goal, how much players contribute to Corsi, and a variety of other things. I hope that after looking at all of this with you, there may be something within the Devils system that reveals why they lag behind their opposition. We may not get an answer until the upcoming season where I will be tracking new data, but we should be able to pinpoint something.

This was the first in a summer series looking at all of this data. There will be player analysis, team analysis, and sometimes general rambling by yours truly. Give me your questions, statements, feedback so I can better steer this towards where your interest lies. Sound off below!