Jaromir Jagr led the New Jersey Devils in scoring last season, which was impressive given that he's on the wrong side of 40. Therefore, a closer look will be taken at all of his points. This post focuses on the 24 goals Jagr scored last season.

Share All sharing options for: Looking Closer at the 24 Goals Jaromir Jagr Scored for the New Jersey Devils in 2013-14

Jaromir Jagr did not actually lead the New Jersey Devils in scoring goals last season.  Adam Henrique beat him out by one. However, Jagr did lead the Devils in total scoring.  His feat was arguably more impressive considering the age and circumstances that brought him to New Jersey.  I certainly didn't think a 41-year old Jagr was going to put up 24 goals, 43 assists, and lead the team in both shots (231), assists, and points (67) when he was signed a few days after some guy named Ilya quit on the team.  Now, he's back for 2014-15 for more money and I'm more than fine with it. I never would have predicted it.

As a result, I want to take a closer look at the production Jagr brought last season.  I will begin with the goals for three reasons.  One: goals scored for your favorite team are always a joy to look at, not a chore.  Two: it'll be a shorter list than his assists, which will also have to be split up between primary and secondary.  Three: this list includes his milestone 700th career goal in the regular season, which I broke down shortly after it happened. Again, I didn't think Jagr was going to score ten goals all season.  After November 2013, I was wondering whether he would hit that mark.  He managed to surpass it.  You're next, Gartner.

Making this task even easier is that a Youtube user by the name of Spencer M put together this compilation of all 24 goals Jagr scored last season.   It's a fun video to watch on it's own.  I primarily used this in charting out what I saw: how Jagr shot it, whether it was a scoring chance (a shot - not a deflection, not on an empty net - taken between the dots up to the top of the circles to the crease; Jon Willis defines it better in the Edmonton Journal), whether it was a fluke, and where the puck went into the net.  I went to NHL.com to take a closer look for certain goals to confirm what I saw, but I used the compilation video for initial findings.  I also went there to confirm the dates he scored these on.

Glorious.  Now here's a chart of most of my findings (goal location will be summarized, not given due to size.

Before throwing more summaries of what I found at you, what I found interesting about Jagr's goalscoring was how he was subjected to a number of droughts.   Michael Ryder's two-month cold streak really overshadowed a number of goalless streaks.  Jagr had a few that I nearly forgot about until I looked at the dates.   Jagr scored in consecutive games to start his production, but then went seven games without scoring before a breakaway goal happened on October 29, GF #3.   After a hot November where he scored eight goals, Jagr went eight games without a goal since November 27, GF #11, until finally converting a power play on December 18, GF #12.   After beating the goalie on the flank for a PPG on December 21, GF #13, Jagr did not score for ten straight games.  Jagr snapped that on the eleventh game, a far-post shot through a lot of traffic on January 14, GF #14.   Two to four game stretches without a goal for Jagr became more common after that, but nothing beyond that until the end of the season.   After scoring his 24th, Jagr was held goalless for the final seven games of the regular season.   That's at least four extended goalless streaks.  The fact that Jagr was able to contribute as much as he did at such an advanced age is impressive.  Yet it makes me wonder with a little more luck, could he have been a bit more consistent and productive?  Is that asking too much? I do not know.

Anyway, Jagr's 24 goals were a challenge in determining whether the shot came from a scoring chance.  He had plenty where he was just outside of the area or on the border.  For example, His first of the season appeared to me to be just above the top of the circles, so I didn't count it.  For a second example, GF #5 saw Jagr just above the left circle for his shot.  For a third example, when he curled around the net and fired a shot through a double screen and the goalie, Jagr was just below the dot and outside of the area on GF#17.   I counted 13 goals came from chances in total - just over half - but another viewer could argue for a few more.

Jagr's total didn't include too many flukes.  I only counted three.  Two of them came on his empty net goals, GFs #4 and 7. In both cases, a defending player had the puck and simply lost it on their own right to a forechecking Jagr.  Just brainfarts by them.  Jagr's second empty net goal did look pretty with the turn-around backhander, but i wouldn't have happened without the giveaway.  I figured neither would be likely happen again. The third was GF #16, where the puck actually went in off Jagr's skate. Jagr was trying to stop so it was a legitimate goal but it definitely was not intentional.  The other deflections he scored with at least had him in position and making a move with his stick.  This one did not.  Hence, it was his third and final fluke goal of the season.   One could argue GF #18 was a fluke as it featured Sergei Bobrovsky sprawled outside of the crease and Jagr putting it in off his skate from the goal line.  I did not because Jagr intentionally tried to do that - and succeeded.

Now for a summary of charts: 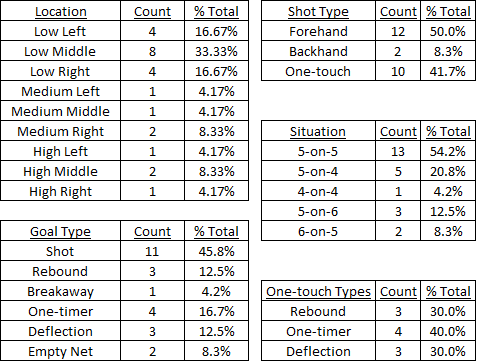 Jagr constantly put the shots in low, he didn't provide too much lift unless when necessary.   A plurality of his goals were just shots.  He only put in a few one-timers, rebounds, and deflections.  Jagr only had the one clear breakaway all season (GF #3), which surprised me by the end of this.   Most of those shots were forehanded shots, Jagr only struck big with backhanders twice (three times if you include one of his deflections).   Among those one-touch goals, they were mostly evenly split between rebounds, one-timers, and deflections.  I will say I counted GF #10 as a rebound because Jagr banged in the puck after it came off his own stick; the second effort made it a goal.  The first effort might have, but Jagr took no chances.   Lastly, Jagr did a large percentage of his damage in 5-on-5 play.  He did strike for a few power play goals.  He also had a little flair for the dramatic with three goals while the Devils had the goalie pulled and one overtime winner - in a game the Devils did not deserve to win.

As a final point, I want to stress that this was a lot of fun to do.  Jagr scored a lot of pretty impressive goals. Re-watch the video again, and just be amazed the goals themselves.  I'm going to run down the ones I liked the most:  While the shot went in off a skate, Jagr cutting to the middle for his 700th goal (GF# 19) just felt absolutely appropriate for him to do.  The goal he scored after that, GF #20, was an absolutely amazing individual effort and a rocket of a shot.  Goal #701 was a better individual effort than Goal #700, if one could believe it.  His lone breakaway goal, GF #3, was too sweet and hit the middle of the back post; it got the rare "medium middle" location count.  His rush on GF #9 was lovely and the way he tucked under the goalie's pad was cooler than James Bond.  Picking far post past a mess of bodies in front of Carey Price on GF #14 made my mouth just utter a quiet "wow."  Lastly, his final goal of the season, GF #24, was just a killer shot.

I honestly couldn't tell you what to expect from a 42-year old Jagr next season.  Maybe Father Time strikes down on him hard and he becomes just a role player with a few goals.  Maybe he drops another 20-goal season and becomes the fifth leading goal scorer in NHL history (and would make him fifth all-time in points too).   It'll be worth watching all the same.

So what do you think of Jagr's 24 goals from this season?  Impressed with his released?  Amazed that he's able to put them in from just outside of the danger zone (this sounds better than scoring chance area)? Relieved he didn't have too many flukes? Which of those 24 goals was your favorite?  Please let me know your answers and other thoughts about Jagr in the comments. Thank you for reading.