How Much is Left in the Tank for Dainius Zubrus?

After signing a 3-year contract with the Devils last offseason, the 35-year-old Dainius Zubrus had a lackluster season in 2013-14. With a lot of concerning trends developing for the big forward, how much can he contribute going forward?

Share All sharing options for: How Much is Left in the Tank for Dainius Zubrus?

The New Jersey Devils were a team generally lacking in production from their forwards this past season. Beyond Jaromir Jagr  and perhaps Patrik Elias, there were a lot of spots in the lineup where the Devils didn't get quite as much as they had hoped. Considering what they were hoping for was not all that much in a lot of cases, it made for a considerably poor offensive team, overall. Among the under-performers was veteran forward Dainius Zubrus, who, after having some modest success early on the first line, dropped completely off the face of the Earth for much of the season. So was it an aberration, or the beginning of the end for big number eight?

Last offseason, the Devils signed Zubrus to a 3-year, $9.3 million deal. At the time, reactions were mixed, but leaned positive, as Zubrus was versatile, had performed fairly well over the life of his past contract, and was actually taking a bit of a paycut. Some were opposed to giving a guy of Zubrus' abilities a 3-year deal going into his age 35 season, and early returns suggest that those folks may have been right to worry a bit. Obviously, no one was expecting Zubrus to be a big-time scorer for the team, but his production has slipped and there are some other worrisome trends to be found in his game, too. His sub-par season, accentuated by his seven (7!) points after Christmas, has caused plenty of concerns with how Zubrus fits on this team going forward.

First, let's take a look at Zubrus' production in terms of points over his career (stats via Hockey Reference): 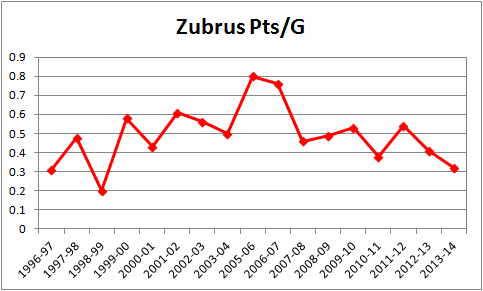 Now, any player entering their late thirties is bound to start declining, but the problem for Zubrus is that he wasn't in a very high spot to begin with. For the majority of his prime, he was around a half-point-per-game guy, with the exception of the two post-lockout years in Washington that he played alongside Alexander Ovechkin (side note: Ovechkin put up 106 points his rookie season on a line with Dainius Zubrus and Jeff Halpern, which is utterly ridiculous; related: the Caps had a dreadful roster his first two seasons in the league).

Zubrus' last four years are showing a trend of a guy who is definitely tapering off in production, with points per game numbers of 0.38, 0.54, 0.41, and 0.32. His 0.32 pts/game is his lowest since his age 20 season, in which he was buried in ice time on the Flyers before being traded. Even that 0.54 pts/game season, which is a pretty good number for Zubrus, is a bit hollow when you dig into the numbers a bit more; he shot 15.6% that year (career 11.7%) and the Devils as a whole shot a crazy 10.7% at evens when he was on the ice, which will give anyone's numbers a boost.

There is some semi-good news for his production, though, and it comes in his shot rates: 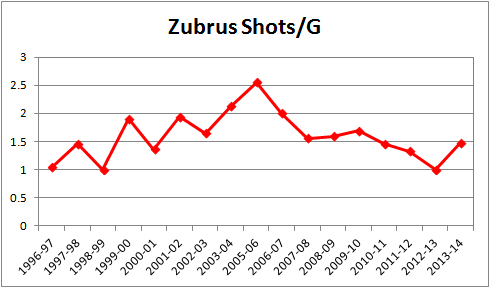 Zubrus was able to break out of a three-year trend of declining shot output this past season, jumping up by almost a half-shot per game versus his injury-shortened 2013 campaign. Obviously, we know the production didn't necessarily follow, but he did at least bounce back from his worst season, shot-wise, to put up a number more in line with what he's provided since arriving in New Jersey. If he reverts back to the trend we saw the few years prior (a possibility if he drops in the depth chart), his production could sag even more, though.

The refrain on Zubrus over the years (and one I have happened to agree with) is that he provides more than just what shows up in his NHL.com box score. For most of his tenure in New Jersey, this has been the case, as Zubrus was a guy who won battles and helped consistently drive play forward for the team. This is reflected in consistently being one of the better performers, in terms of Corsi rates, on the team. A not-so-great trend is developing in that aspect of his game, though (stats via Behind the Net; stats only go back to 2007-08): 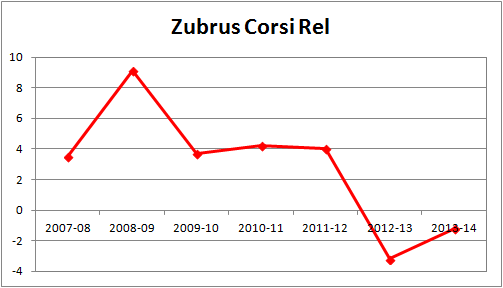 After five seasons of consistently seeing favorable possession numbers from the big Lithuanian, the last two seasons have seen a concerning drop-off. Perhaps the 2013 season could be written off as a fluke as it was short and marred by injury, but Zubrus finishing negative in relative shot attempts when he spent over half of his season with the Jagr/Zajac possession machine raises at least a little bit of a red flag. To further drive that point home, Zubrus' Corsi% was 57.9% with Jagr and 49.4% without him. Obviously, everyone gets a boost when they are playing with Jagr, and the way he is deployed changes on a different line, but with his other teammates, Zubrus was getting out-attempted at 5v5 play on a team where almost no one gets out-attempted at 5v5 play.

Now, if it were just the possession, or just the production that were dipping, I think one might be satisfied that he could bounce back and contribute in a significant role on the team, but when combined, it's hard not to be worried about the final two years of his contract. It's possible he could rebound a bit at evens, and he was still a significant part of a league-best penalty kill unit (he trailed only Adam Henrique in PK ice time for forwards), but his role on the team is now a bit of a question mark with him being a non-factor at 5v5 for much of the year.

If he isn't a top-6 caliber player at evens anymore, and he has trouble making an impact as a 3rd liner, what are the options? Are the Devils willing to pay a 4th liner/PK specialist over $3M a year, or will they continue to try to make it work with Zubrus in the top-9? Perhaps as a winger on a 3rd line with a stronger center than Henrique, he can carve out a niche, but doubts are creeping in for how effective he can continue to be in a significant role at even-strength. A bounce back could be in the cards, but betting on big improvements from a 36-year-old seems like a good way to lose your shirt. It pains me to say because I like Zubrus as a player, but I think the Devils will have to seriously consider making him a 4th-liner and limiting his top-9 time to spot starts if they hope to improve the state of their forwards next season.