There's a perception that you need a certain amount of bulk to hold up in the NHL. Particularly around draft time this idea tends to heat up because undersized prospects carry with them the concern of not holding up. We delve into this assertion.

Around draft time there are always several players that pop off of the stat sheet. However, a big problem with a lot of these players is that they did what they did against such clearly inferior competition. In particular, at the junior level, they are playing against much smaller men.

The prevailing notion is that some players are just too small and others need to bulk up before they are "NHL-ready." And perhaps there is some truth to it. After all we all know what happened when the last time the Devils drafted an undersized player in the first round. The Kings drafted a lightning-in-a-bottle offensive defenseman named Thomas Hickey 4th overall in 2007, but he couldn't even make the roster, possibly in large part because he was only 184 lbs which is very light for an NHL blueliner. However, this past year -- his second as an Islander -- according to Hockey Prospectus, he was the best defender on the Islanders this year. So wait, does size matter?

Using stats compiled by Robert Vollman, I was able look at the GVT of every player in the NHL along with their height and weight. The idea is that if I find a pattern among these stats then we can at least see if height or weight has even a slight affect on production. However, first I need to hedge my bet a bunch so that I can appear as right as possible. This strictly analyzes if size matters once you are in the NHL, it does not analyze your ability to get into the NHL. And now onto the charts! 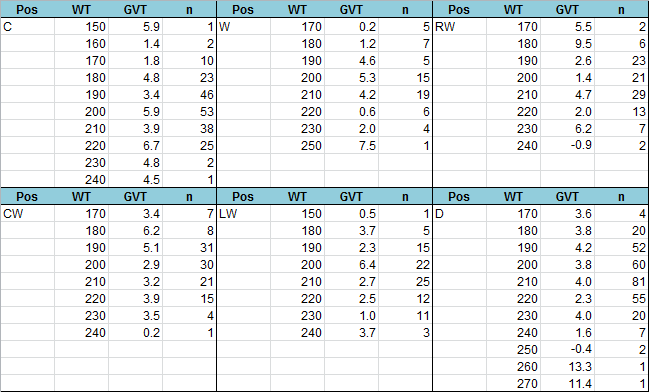 These statistics are pretty messy so let me just clarify a couple things first. This is 6 separate charts based on the 4 skater positions plus two extras. CW is a player who played both center and wing over the course of the 2013-2014 season, and W is a player who rotated between the two wings. Also these players were not all perfect multiples of 10 in weight so yes there was rounding. The GVT column is the average GVT of that weight group. Finally, the "n" column is how many players were that weight. Now for a bit of analysis.

These are not nearly as helpful as I thought they would be. I actually had done this once before without splitting it up into positions and the results were even messier. There is absolutely not a linear correlation for any of these positions so let's rule out "the bigger you are, the better you are." But you will see that most of the positions come to a point somewhere within the data. So while we may not have a trend line, we might have a "right weight." The local maxima are as follows. 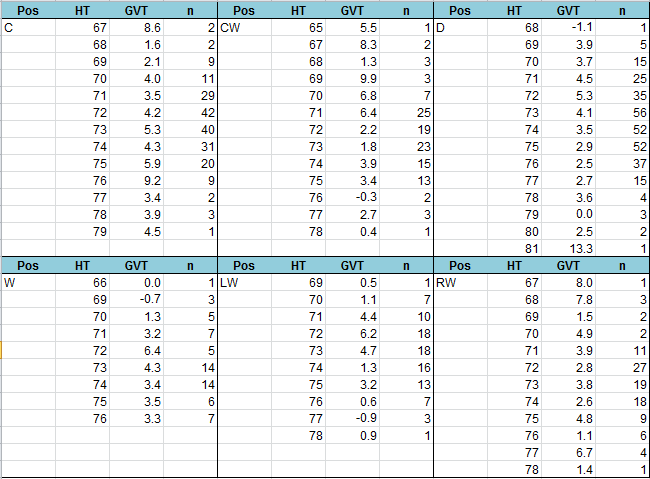 The height measurements are in inches because that makes handling them much easier. We have a similar issue here as we did with weight where the NHL seems to suffer from a bit of a Goldilocks Syndrome. Players need to be just right to achieve highly in their position. My interpretation of the statistics are that the Goldilocks heights (converted to feet) are

Yes size does seem to matter ... kind of. One thing to notice about the charts above is that the "n" column is pretty normally distributed in all of them. That means it goes up and then chills at right around the average and then it comes back down. Now the production doesn't always match up with that. For instance, according to this data, defensemen really don't need to be as big as people think they do. There is no weight correlation and there's pretty strong support that the best defenders last year were around 6'0''.

Height seems to "matter" more than weight, but that just means that it has a stronger correlation. In the end there will probably be on Martin St. Louis for every Zdeno Chara. It's not the size of the dog in the fight, it's the size of the fight in the dog. But, for the sake of contribution, here's a list SOME of the guys that are closest to their expected height/weight in the draft:

Are you okay with picking a smaller guy like we did in the mock draft. Or would you be more comfortable with someone like Bleackly who Karen profiled and who is already prototypical size as mentioned above. Does the terror of Tedenby frighten you? Is the last thing we need another Dainius Zubrus? Comment below and HAPPY DRAFT DAY.