With the 2014 draft starting tomorrow, and the recent rumors of Cory Schneider and the Devils beginning contract extension talks, I take an anecdotal look back at the trade that shook the Devils' organization (and the NHL Draft) last off-season, the ramifications it had on the past season, as well as a brief glimpse towards the future..

Share All sharing options for: The Cory Schneider Trade: One Year Later

I still remember the 2013 draft as if it happened yesterday; Sunday, June 30th 2013 would need to be an important day for the New Jersey Devils, as the team was one year removed from losing Zach Parise and had just missed the playoffs for the second time in three years.  This was almost unheard of for a proud organization whow previously had a string of 14 straight playoff appearances, but the lack of scoring forwards was starting to show.  The need to draft a forward to help shoulder the load on offense was of the utmost importance, and with the 9th overall pick, there were quite a few enticing options.  In the days leading up to the draft, the names of Hunter Shinkaruk and Valeri Nichushkin were mentioned in connection to the Devils, and it seemed the Devils were leaning towards Shinkaruk, as many thought Nichushkin would be gone before the 9th pick.

Draft day for me happened to also be laundry day, so I decided to watch the draft to keep me entertained.  I was slightly surprised to watch Nathan Mackinnon go 1st, and greatly surprised to see Seth Jones (projected first overall) slip to 4th.  I stepped away to fold some clothes from the dryer, and came back to not only a napping girlfriend, but the Oilers selecting Darnell Nurse 7th, and Buffalo selecting Rasmus Ristolainen 8th.  I quietly settled back in on the couch as the host team, our Devils got ready to make their pick.  I waited and watched with baited breath, until I noticed something a bit unusual.  NHL Commissioner Gary Bettman was at the podium, and my eyes were glued to the TV now as he uttered six words that would change not only the draft projection, but the future of the New Jersey Devils.

"We have a trade to announce."

As he said those words my mind flashed to some of the rumors I had read online; Adam Henrique and our first to Anaheim for Jersey-born Bobby Ryan; Adam Larsson and our first to Edmonton for Jordan Eberle or Ales Hemsky and a pick.  There wasn't much in terms of verification of those rumors (a few Tweets at most) but the thought of a goal-scoring forward had me on edge.  While I wasn't keen on losing either Adam (and to this day still I'm not), the lockout-shortened season had proven that we needed some additional scoring.

As Bettman tried to talk over the raucous Prudential Center crowd, I crept to the edge of my seat, waiting to hear his announcement.  "New Jersey trades the 9th overall pick in the 2013 draft to Vancouver..."

As he said that my mind quickly flashed; Vancouver?  For Ryan Kesler?  Are we trading down in the round?  I'll be honest, I have no clue how that all ran through my head, nor why Kesler's name was there, before he completed his sentence with:

"...in exchange for goaltender Cory Schneider."

My jaw dropped, and I let out the longest, highest-pitched "what?" that I have ever heard (at least from myself) in my entire life; it was enough to startle my girlfriend from her nap.

"WE JUST GOT VANCOUVER'S GOALIE OF THE FUTURE FOR OUR FIRST ROUNDER!"

The announcers continued to drone on in the background as I pondered about Cory on the Devils; strangely, my mind no longer cared about forwards and goals we scored.  Now I was solely focused on Schneider and the lack of goals that would be going into our net.  I had seen him and I knew he was a good goaltender, but was he "Martin Brodeur heir apparent" good?  I figured I might as well put some faith in him, starting right then and there.

The Prudential Center faithful seemed to agree with me.  (If you just want to see the fan reaction, skip to 2:20)

For the first time in two decades, the New Jersey Devils now had not only a glutton of goaltenders, but also a goal-tending controversy.  The former would be easily rectified with the use of a compliance buyout on Johan Hedburg; while Jersey still loves Moose, it was simply a case of his play declining, and him basically being the odd man out.  This move also meant that Keith Kinkaid and Scott Wedgewood would both be spending the season in Albany, with the exception of the preseason and call-ups.

This would only be the beginning of the New Jersey Devils Summer 2013 Roller Coaster Ride.  The ride started out great as the Devils would sign Michael Ryder and Ryane Clowe on the same day, just a mere five days into free agency.  The big drop would come less than week later, as Koval-Gate would see Ilya Kovalchuk retire from the NHL with the intention to move his family home to Russia and play in the KHL.  The Devils would raise their fans back up again with both the signing of Jaromir Jagr, and the training camp invite extended to Damien Brunner.  With the hope that quantity could replace Kovalchuk's production, the Devils marched into the 2013-2014 season.

Now moving on to the latter point from above; the Devils at this point had a surefire, future Hall of Fame yet aging and declining goaltender in Brodeur and a young, hungry, excellent but somewhat unproven goaltender in Schneider.  Pete DeBoer attempted to reconcile the situation before the season even started, stating:

"Marty's back. Marty's our starting goaltender and we've got a fantastic 1A in Cory Schneider."

Now under normal circumstances, the coach's word would be enough; Brodeur will start, Schneider will get more games than your usual backup.  Done deal.  Except for the fact that right before the start of the regular season, Schneider would end Brodeur's streak of starting 18 straight regular season openers.  It's an unheard of goal-tending streak, one that may not come close to being touched ever again.

Despite both men (as well as many others within the organization) attempting to downplay the controversy as a 1A/1B goalie competition, the fact remains that a lot of things happened this past season that fueled the controversy concept.  I don't want to recap everything from season in great detail, (there's enough material to create an entire other article) but we did have a few other major moments worth noting.  Both goalies would have a game where they got absolutely shelled; Marty would get hung out to dry against Our Hated Rivals during the All-Star Game Stadium Series (in which Cory would replace him for the third period) and Cory would get killed on the back half of a home and home against the Red Wings.  Marty would be pulled again in the infamous Florida Zajac Hat Trick game, but would still pick up the win.  Both goaltenders would express frustration with their playing time during the season; Cory's frustration would come early on, and Marty would express himself pretty much from after the Stadium Series, through the trade deadline to present day.  Marty has however stated more recently that Cory will be the clear-cut number 1 going forward, even if it means he plays a season (or more) in another uniform.

After just one (sadly disappointing) season, the Schnei-Deur era appears to be over in New Jersey.  I can't help but wonder what would have been if we had gotten Cory a few seasons sooner, and he had spent more time learning from the living legend himself.  Schneider is however now in the prime of his career and he seems poised to be a full time starter.

A Look Towards the Future

With the recent reports of Schneider being in extension talks with the Devils, I thought it would be a good time to reflect on some of the repercussions of that fateful trade from one year ago.  If he signs, Cory will essentially be our starter for approximately the next decade, barring some other crazy trade.  If he doesn't sign an extension, then we will have tossed away a chance at a scoring forward, (something that our Devils are still searching for this off-season) not to mention we'll be in the same position we were before the trade: no successor to Marty's throne.

When in action, Cory posted some respectable numbers this past season.  Without going into advanced statistics, here's some quick numbers for Cory from this past season, as well as Marty's for comparison, courtesy of NHL.com: 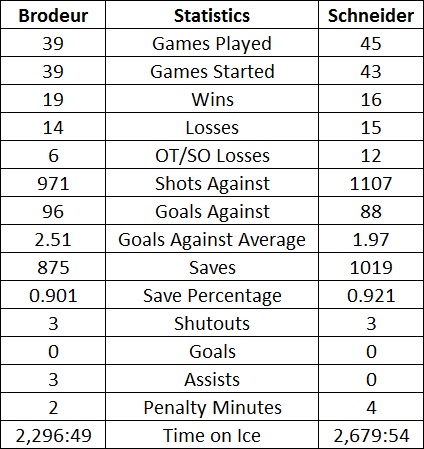 Worth noting from Cory's stats is that his goals against average was 3rd in the league by season's end and his save percentage was good enough for 13th.  I know his record is not necessarily the best (and Marty's is in fact better) but I'd like to think that it's more indicative of how bad the Devils were offensively last season, both in regulation and especially in the shootout.  While he may not have had any points like Marty did (a testament to him not being the play starter Marty is, at least not yet), there were some games where he alone kept us alive, and even one game where he might as well have been the only player on the ice for the first 54 or so minutes.

For the sake of this team's future, I think we need to lock up Cory long term, and we need to do it now.  Great goalies don't grow on trees, and while there could be more attractive options next summer, there's no guarantee there will be.  As we've already seen yesterday, if a team likes the player they have, they resign him before he hits free agency.  Also, why go for an unknown commodity when you've got an excellent, possibly elite commodity already in your organization?

Now I'd like to hear from you; where were you and/or what was your reaction when the Schneider trade went down? Were you pleased with what he brought to the team last year? Was there any particular "goalie controversy" moment that's stuck in your memory from this season?  Will Cory sign an extension before the season starts? Do you think he will be able to handle a 55-60+ game workload? Please leave any comments below and I hope you enjoyed reading about my reaction to this huge trade.