The ILWT Audition for 2014 process continues with this submission from Writer Q CJ Turtoro. It's an in-depth look at the New Jersey Devils' issue going into this offseason and what can be done to address it.

Share All sharing options for: ILWT Audition 2014: Tell Your Friends

At the end of April, I put out another call looking for new writers for In Lou We Trust to write about the New Jersey Devils. I've opened up the audition to the community at large in order to get some new perspectives and additional voices on the front page with regularity. Since then, I've received eighteen entries that met the submission criteria. Regardless of how they're received, I thank the writers of each and every one of them - you know who you are - for stepping up and submitting an entry.  (One more instruction for those who made submissions and received letters, by the way.  Please do not comment on your submission or any of the other audition posts.  This will help allow others to freely judge the work and show that you can handle online reactions.  No drama is the best drama.)

Throughout the this week, I will post each one under an anonymous name so you can discuss and critique the post without regard to who actually wrote it. I can ensure you that I did not change any of the content outside of formatting it in to the SBN platform.  To that end, please note that I don't necessarily agree with what the posts actually say. I'm just letting them stand on their own. Please be constructive in any criticism and do offer your thoughts about whether you liked (or disliked) the post in addition to discussing it's content. Don't be mean, but be fair.

Now, I assigned a letter to each writer based on when I received it.  However, I decided to mix up the letters in terms of order of posting.  So this process continues with the submission of Writer Q CJ Turtoro, who has an in-depth look at the team heading into this offseason and offers a few suggestions for how they can address their issues.

All we've got left

About a year and a half ago, hockey fans everywhere rejoiced. The painful, mind-numbingly stupid lockout that had pushed our sport even further into public obscurity for a half a season had come to a merciful end. For New Jersey Devils fans, we saw Zach Parise get 2 assists in his first game in another color sweater. Travis Zajac responded to his big contract by scoring the first goal of our season encouraging fans that he was something other than an overpaid consolation. We saw the game-winning goal scored by David Clarkson who most agreed would be playing his last season as a Devil and we saw 24 minutes from Ilya Kovalchuk who no one agreed would be playing his last season as a Devil. We saw Martin Brodeur in what would turn out to be his final start in a season opener. All this distracted from another landmark that was set this day in New Jersey sports. This was the first time ever that the Devils would start the season as the only professional New Jersey sports team.

Few of those who call New Jersey home have reservations in rooting for either the Giants or the Jets, but they do both have that pesky "New York" surname. But it's more than that. When the Giants won the Superbowl twice in the last 7 years, they chose to celebrate with those who share their name as opposed to their home. I live 15 minutes from East Rutherford, yet I'd have to cross the river to celebrate with the team I supported for the entire season. It was okay though, because we still had 4 teams playing in New Jersey so being slighted by one wasn't the end of the world. Then the Nets achieved record-breaking futility before abandoning the home that stood by their mediocrity in favor of a home once again across the river.

Meanwhile, the Rock has been the center of the effort to rebuild Newark. The community is centered around the Devils and vice versa. The Devils are the first team to show that they are proud to be associated with the state as opposed to settling for New York's ugly stepbrother. New Jerseyans are fed up with being overshadowed. We have the Statue of Liberty, we have Frank Sinatra, and we have the best hockey team in the tri-state area. It may not feel like it right now as the Rangers continue their Stanley cup march, but rest easy, the Devils aren't far off.

Fenwick has been shown to have a relatively poor correlation with making the playoffs. However, once in the playoffs, the one that make it furthest have stellar Fenwicks. The Stanley Cup Champions since 2007 (introduction of Fenwick) have an average FF% (percentage of Fenwick For versus Fenwick against) of 52.3 which would be a top 7 rating. Also 3 of the past 6 winners were #1 in FF% and this year's #1 is LA who as of this article is awaiting a game 7 in Anaheim which I expect them to win. The Devils are #5 in FF% this year and were #1 in 2013. These are just fuzzy numbers though right? Let's look at a more concrete example of why next year should be more promising.

The graph below has a horizontal axis of 5on5 goal differential and the vertical axis is SO Adjusted Records. This assumes every team had a .500 SO record. This takes out the obvious fact that the Devils should expect to improve in SO and analyzes out expected improvement in other areas. 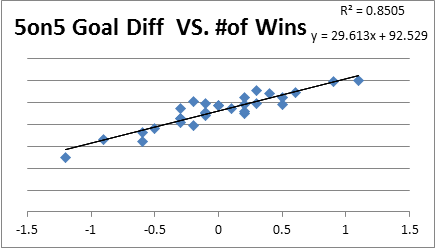 The r2 value shows how powerful a predictor this stat (5on5 differential) is and in this case we have 0.8505 which means that the stat is about 85% predictive of the number of shootout adjusted wins. The 29.613 next to the x in the upper right shows that every goal added to a team's differential is worth about 29 points. The 92.529 says that a team with a goal differential of 0 should expect about 93 points which is consistent with what we'd expect an average team to get.

So all this shows is that this stat is a good predictor of wins ignoring shootouts. But where do the Devils fall in this line? Below is something called a residual plot. It takes that line from the first graph and shows how far off each team is from what we would have expected them to get. 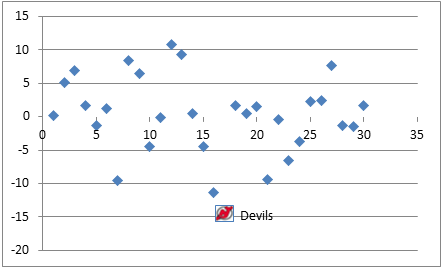 Comments on forums and capgeek always figure out the dream scenarios in which Stastny, Cammaleri, and Vanek all come crawling to Jersey because who wouldn't love to play for us right? Well we can just as soon expect Gretzky, Kurri, and Messier to come out of retirement and don the red and black before going down the shore to get their GTL on. Well those are all things that seem out of the cards for us, but there are some very helpful UFAs that solve our problems. First let's look at our problems.

It would be exhaustive to analyze each of the most helpful UFAs, but as we can see from Vrbata's credentials, affordable solutions exist. Among the other players than can help us improve our problem areas are:

Jussi Jokinen may be too expensive because of his stellar postseason, but Steve Ott has been much-maligned since being traded and Moulson underwhelmed in the playoffs so they are all attainable.

Conclusion
The Devils are the default pride of New Jersey. They've not only stayed at home, but they've been proactive in their community and proud of their history. They have a stellar recent history, vastly superior to any team from across the river. They can expect an improvement in non-shootout wins and have several UFAs available to solve the shootout and other problems. Our already stellar Fenwick implies that we will be setup well to succeed provided we can make the playoffs.  So tell your friends. Tell your family. Tell your coworkers. Tell strangers on the street. Tell anyone who has every watched Jersey shore. There is one true New Jersey team and their best days are still ahead of them. #ILWT

Now that you read Writer Q CJ's post, I want to know what you think about it.  What do you think of the subject matter? What did you think about how Writer Q CJ wrote this post? Based on how it was written and what was it about, is this the kind of post you would want to see regularly at In Lou We Trust? Please leave your answers and other comments about this post in the comments. Thanks go to Writer Q CJ Turtoro for the submission and thank you for reading.