The Devils' 2013-14 attendance numbers bring a mixture of good and bad news for those concerned with how the Devils are drawing these days.

Share All sharing options for: Good News/Bad News: Taking a Look at the Devils' 2013-14 Attendance Numbers

As the third team into the New York Metro Area market, the Devils have always had their issues with packing the arena for home games. In the final years of Brendan Byrne/Continental Airlines Arena, attendance had sagged greatly and the Devils were drawing just north of 14,000 per game and only filling the arena to around 75% capacity on average. Part of that was likely due to the lockout that wiped out the entire 2004-2005 campaign, but attendance had stagnated and dipped from its late 90's peak even before that. When the Prudential Center was built in Newark, many hoped that the attendance issues would be solved or at least aided with a new state-of-the-art arena. While it certainly helped, it's hard to say the Devils' issues with selling tickets have been solved at this point. They still pretty much land in the bottom third of the attendance numbers on a yearly basis.

Last year, Devils fans filled the Rock (or old BB/CAA, for that matter) more than they ever did before, to the tune of a 97% capacity for the season as a whole. They sold out 21 out of their 24 home dates for the truncated season, and the question I asked after the end of last season was whether the Devils had finally turned that elusive corner, attendance-wise, or if it was just a mirage created by the shortened season and the Cup run the prior year. Judging by this year's attendance, it seems like last season was indeed an outlier and we've pretty much returned to the norm at the Rock. It's a bit disheartening to me, but not really unexpected, either. To the numbers: 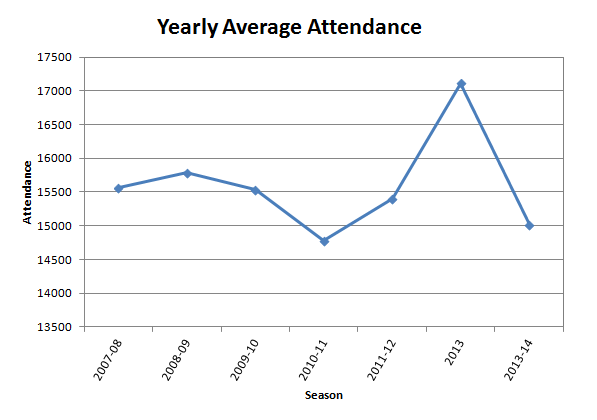 As you can see, this was not a terrific season in terms of raw attendance numbers at the Rock. The Devils drew 15,012 per night (not including the Stadium Series game), which is actually the second least amount of fans per game of any year since they moved to the Rock. Only the 2010-11 calamity of a season drew less total fans at the Prudential Center. The reasons for this are fairly easy to surmise: we've returned to the full season slate and pre-holidays attendance is always a bit of a drag, the Devils missed the playoffs the season prior, and a disastrous start out of the gate coupled with a team that could never get out of second gear afterward. All told, it certainly was not a recipe for success. This chart also pretty clearly indicates that last season was a probable outlier for attendance purposes.

This all comes with a bit of a caveat, though: the Devils' new owners fiddled with the capacity numbers for the Prudential Center this year, removing a little over 1000 seats per game from the total for a sellout crowd (reducing capacity from 17,625 to 16,592 for hockey). Using the % capacity numbers, a bit of a different picture is painted for this past season: 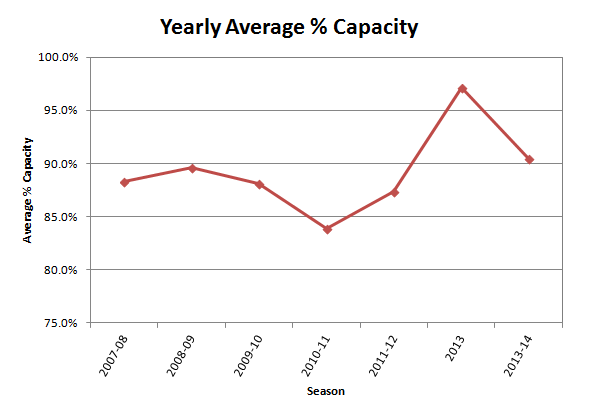 In terms of the % of the arena filled, this season was actually the best for a full year schedule at the Rock and the second best for a full season overall (third, when including the shortened 2013 season). The Devils filled 90.5% of the seats this season, second only to the 90.9% of seats filled in the 1997-98 season at Continental Airlines Arena. It's at least a modicum of good news, even if it is partially created by a bit of number-massaging. The reason for the capacity reduction is murky, but in a Fire and Ice piece from November the Devils said it's partially due to the team removing standing room and obstructed view seats from the total. That doesn't seem like 1000+ seats, but maybe they took out the Goal Bar/Acela Club out of the total or something. Either way, 16,592 is the max number now (though, curiously, a March Rangers game actually exceeded this total by quite a bit).

Looking at the month-over-month trends for attendance this season, it seems like a pretty typical pattern compared to years past. Looking at an old post from former ILWT writer Matthew Ventolo, you can see that attendance typically trends up as the season goes along. This year was no exception: 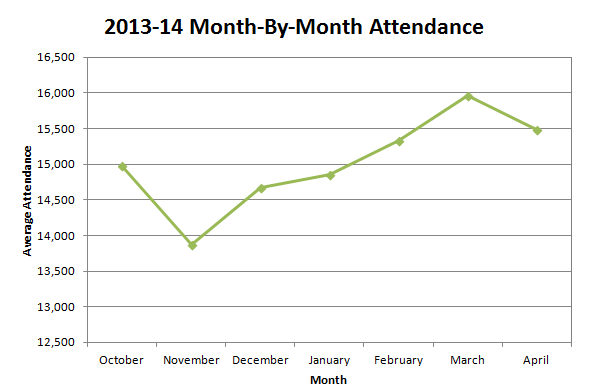 So after an okay start in October, you can see the attendance numbers took a bit of a nosedive in November. A brutal start which included seven losses to open the season and one win in their first 10 will have that kind of effect. Once the team stabilized, the numbers headed in the right direction again. People are always more willing to head out to the games in the spring than they are in the fall.

So what do the numbers mean for this season? I guess it depends on your expectations and which numbers you value most when looking at a team's attendance. If you were hoping for something comparable to last season's numbers, then this season was definitely a big disappointment for you. In terms of % capacity, it was one of the Devils' better seasons in history. I'm not naive enough to think that 90.5% number is completely real, but keep in mind that the reduced capacity will also skew down the raw numbers as well, so the answer probably lies somewhere in the middle. The Devils ended up selling out 11 home games in all this season, far from anything to write home about, but in the neighborhood of most of the other full seasons at the Rock, too. For better or for worse, the attendance in Newark appears to be pretty much status quo.

So what are your feelings on this season's attendance numbers? Disappointed? Encouraged? Indifferent? Whatever your thoughts are, fell free to add them in the comments section below. Thanks for reading.