This season's New Jersey Devils team doesn't take a lot of shooting attempts at 5-on-5 and allows even fewer. The thing is that this has been largely the case for six of the last seven seasons across numerous coaching and personnel changes.

In this season, the New Jersey Devils have been of the best in the league in terms of possession, which is often represented as a percentage and with various qualifiers (close-score, 5-on-5, no blocks counted, etc.). Usually, it's good that the Devils have generated more block-less attempts than the opponent. That means they have the puck in attacking situations more often than the other team, which desirable in most games. 5-on-5 play is best for this since it represents about 70% to 80% of the game for most teams in a season. If we consider all attempts (a.k.a. Corsi) in 5-on-5 situations, the Devils have an amazing 54.3% according to Hockey Analysis. That's the third best in the league. But the high percentage doesn't show how the Devils got that percentage. They've done it by being a remarkably low-event hockey team.

I've brought this up from time to time in previews, recaps, conversations with fellow fans, and on episodes of Talking Red. I think an explanation is in order. Events are synonymous with shooting attempts. Any time there is a shot on net (and goals count as a shot), a miss, or a block, that is logged as an event. By being low event, it means that relative to the other teams in the league the Devils don't take nearly as many attempts and allow nearly less. It's evidence of the team's reputation for being so difficult to play against. Sure, on any given night, the team can run wild on their opposition or the Devils look completely out of sorts. Over a whole season, we learn what the team has really been about. Per Hockey Analysis and before the Carolina game, the Devils have a Corsi For (a.k.a. shooting attempts for) per 60 minutes of 48.9. It's one of the lowest in the league. On the flipside, the Devils' Corsi Against per 60 minutes of 41.4, which is the lowest in the NHL. While the numbers have changed a bit since the Canes game, the Devils remain where they are respectively to their other teams. Hence, the Devils have been about keeping events very low relative to the other 29 teams in the league.

Now, I will say that this particular castle is built on sand. Scorer's bias is real and the Devils are notorious for undercounting shots. Even as far back as 2008, this has been known. I believe the same has happened for misses and blocks. However, the Devils are so far behind or ahead of their competition in both CF/60 and CA/60 that even correcting for that undercounting may not really make much of a difference. For example, the league median CF/60 is 54.8; it's 54.5 for CA/60. The scorer getting more accurate or more generous with logging events isn't going to suddenly show the Devils to be that more prolific at generating or allowing events in 5-on-5 play relative to the rest of the league. I think any adjustment wouldn't give them that significant improvement.

As I was thinking about this before the Carolina game, I began wondered how long the Devils have been like this. Were they always like this? Peter DeBoer has coached the team for three seasons, now. Combined with the current personnel, perhaps the team not generating a lot of attempts - never mind shots on net - and allowing even less over the season is a function of the strategies and tactics by DeBoer. Hockey Analysis had team stats from 2007-08 through this season. After I put all the numbers together, I put them in the following chart. What I learned that team definitely was a low event hockey team for all three seasons under DeBoer. And the team can only remotely prolific in attempts for only once in the last seven seasons. 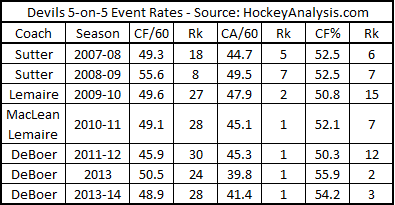 Only twice did the Devils crack the 50 CF/60 mark and only once in the past seven seasons were the Devils a top ten team in that category. It was Brent Sutter's second season with the team. That famed 2008-09 season team that was a rather good squad in retrospect. But before that, Sutter first season wasn't so high in this regard. The team definitely wasn't under Jacques Lemaire, John MacLean followed by Lemaire, and DeBoer. More curiously, the Devils were a consistently good team in terms of allowing attempts. They've been the league leader in CA/60 for four seasons running. They've been incredibly stingy in the last two seasons under DeBoer. This raises a few more questions for further analysis.

First: Is this an actual problem? If you believe it's more important that the Devils just out-attempt their opposition in 5-on-5 play, then perhaps you may not care about whether the Devils do it with a relatively low or relatively high rate of attempts. I can understand that. However, if the Devils want to explore why they're dead last in shots, then it may be worth exploring why they're near the bottom at generating shots in 5-on-5 play. After all, it's the majority of the game and there can be no shots without attempts. Likewise, if the Devils want to look at their defense, then they may want to explore how they've been so low in that regard despite changes among defensemen ranging from having an old leader to rookies playing significant minutes. Something to look into before going out and handing a defender a big contract in the future.

Second: How come the rates have been at the extreme end despite changes in personnel and coaching? Could it be the combination of both working to some level of effectiveness? There have been a lot of changes between that 2009-10 team and the current 2013-14 team. Unless I missed someone, only Patrik Elias, Andy Greene, Cam Janssen, Bryce Salvador, Tim Sestito, Travis Zajac, and Dainius Zubrus played for both teams - and Janssen and Sestito didn't play a lot. The remaining five certainly did and have played significant roles on the team. Could they have had a lot of control that much of the team's action such that they'd be so stingy at both ends of the rink? Or was it their teammates that really drove those rates? We see changes in rates and in possession percentages from season to season; was that really driven by the coach? This is important to know. If DeBoer is let go after 2013-14, then we may not see that much improvement in either category short of a drastic changes in systems and styles by the next head coach. That may mean more of the same: a strong defense relative to the league but a lackluster offense holding them back at times. Changing that may have to come through changing the talent. Possibly both, really.

Third: What happened in 2008-09? A coach in his second season, plenty of good possession players, and somehow it all worked out well. Plenty of attempts, plenty of shots, and not much conceded. A bit more than the rest, but still a top-ten rate. What made that team so different than the one before it? And the ones after it? As much as I'd love to say it was all because of Lemaire making the team play a conservative style, there have been coaching changes afterwards and it hasn't changed since 2009-10. Perhaps the answer to that can help guide the Devils for future seasons - assuming they want to do so.

Four: Could this have been going on further? Hockey Analysis goes as far back as 2007-08. Maybe this has been going on for longer than that. The decisions made prior may possibly have an effect today. I may be reaching but all avenues could use exploring.

I'm sure there are others. I think there are opportunities for knowledge here; I'm just not entirely sure the best way to go about it. Or what would come of it. So I'd like your take. What do you think about the Devils being a low event team? Can they generate more events without conceding more in return? Should they try to do so? Do you think this is more of a function of the coach or the players? What other questions does this raise? Maybe you have some answers? Please leave them and other thoughts about the Devils being such a low event team in the comments. Thank you for reading.