This is a look at the zone exit and passing statistics for the New Jersey Devils' 76th game of the season against the Buffalo Sabres on April 1st. Read on for the details.

The New Jersey Devils simply couldn’t get it done against the worst team in the league. The usual refrain was sung afterwards: “We did enough to win. We should have been up by two or three goals. We had enough chances. We let them hang around.” We’ve heard all that before, but the bottom line is when you say those things for a season and a half, chances are you’re just not very good; you’re average at best. Against the Buffalo Sabres, that’s what the Devils were: average at best. Let’s get to it.

Forwards: Travis Zajac had a strong game, completing 18/21 passes in the offensive zone alone, generating two shots (SG) on six shot attempts (SAG). He finished 25/31 and was strong on the puck all night. He should have drawn a penalty that would have negated the Sabres second goal, and also could have scored in both regulation and in the shootout. It was almost a great game, but you would have liked to see him bury one of his chances.

As a whole, the forwards were quite inefficient, as only ten of their twenty-seven SAG figures resulted in shots, 37%. Same story, different verse.

Defensemen: Marek Zidlicky and Peter Harrold certainly drove the offense from the backend. Zidlicky (29/38, 7 SAG, 3 SG) and Harrold (29/36, 6 SAG, 4 SG) combined to generate thirteen shot attempts and seven shots. They were both very active at the offensive end of the ice, completing seventeen of twenty-five passes in the Sabres zone.

Adam Larsson followed up a solid debut by being not as solid. He completed 21/24 passes, generating three shot attempts, but his three incompletions led to turnovers, which you’ll see a bit further down this article. Eric Gelinas wasn’t great either, failing to generate a shot attempt and prone to turnovers again. Andy Greene and Mark Fayne were steady, if unspectacular. 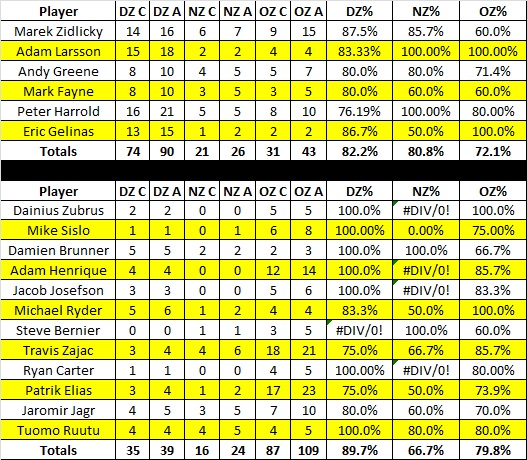 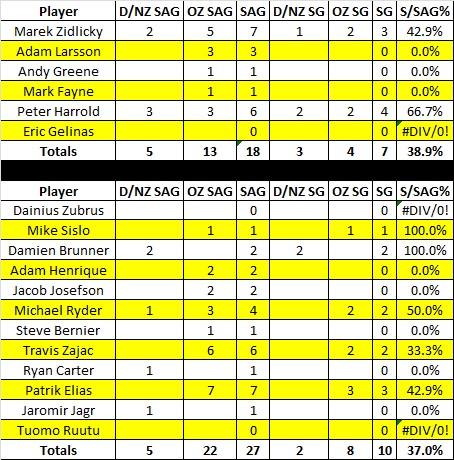 Forwards:Dainius Zubrus was his usual consistent self as all three of his zone exits were with possession. Ryan Carter and Elias each committed two turnovers and were the only forwards to do so. The results were mixed as the forwards finished just below the 50% mark (49%). Those most at fault were Zajac, Mike Sislo, Jacob Josefson, Steve Bernier, Michael Ryder, and Elias.

Defensemen: Turnovers were a big problem for the defense as Larsson (4), Greene (2), Gelinas (2), Fayne (1), and Harrold (1) all committed at least one. Zidlicky was the only defenseman without one, as he finished with a 81.8 PE%, a solid night from him. Harrold was still above 50% (54.5) despite the turnover, so overall he was successful. As a group, the defensemen finished at 46.2 PE% with ten total turnovers. Not a good night. 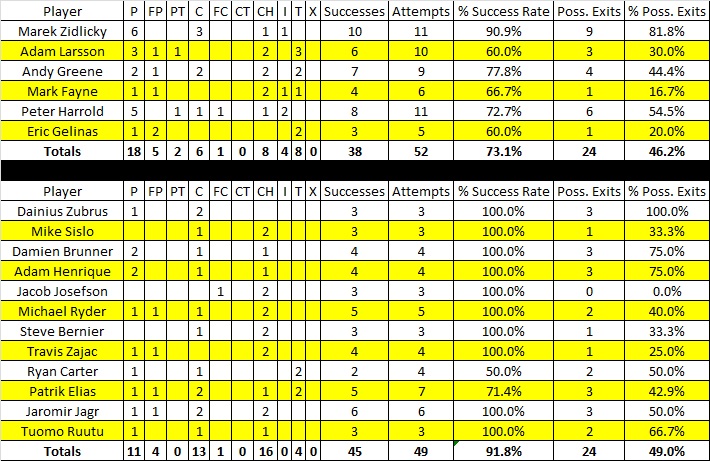