This is a look at the zone exit and passing statistics for the New Jersey Devils' 75th game of the season against the Florida Panthers on March 31st. Read on for the details.

Goals galore! Travis Zajac netted his first-ever hat trick and the New Jersey Devils did not let Florida come back after being down 3-1 this time. Martin Brodeur had a forgettable outing, but it didn’t cost the Devils any points. This game had a bit of a role reversal as it was the defense that carried the forwards when it came to exiting the zone and converting on shot attempts. Let’s get to it.

Forwards: Some poor passing in the offensive zone for several forwards makes you step back and realize this could have been a seven, eight, or nine goal night if passes were just a bit more accurate. In fact, each forward generated at least one shot attempt. Dainius Zubrus had an off-night, completing only four of eleven passes and generating one shot (SG) on one shot attempt (SAG). He wasn’t alone as Jaromir Jagr (12/20, 1 SAG, 1 SG) and Patrik Elias (5/9, 1 SAG, 1 SG) weren’t their usual efficient selves. Granted, Jagr had a moment of brilliance that resulted in a goal, but it doesn’t show up here. Still had to point it out though. What a goal.

Cometh the hour, cometh the man, Travis Zajac certainly was brilliant everywhere. He completed all but one of his sixteen passes and generated two shots on three attempts. Locking both he and Adam Henrique up long-term was a stroke of genius from Lou Lamoriello, as I feel that once the cap rises those contracts with look silly compared to their production and consistent play. In Lou We Trust.

Steve Bernier (11/13) led all forwards, generating five shot attempts, resulting in two shots. In fact, the fourth line of Bernier, Jacob Josefson (13/16, 1 SAG), and Ryan Carter (8/12, 2 SAG, 1 SG) had a tremendous game. After Zajac’s ten completed passes in the offensive zone, the three forwards with the next highest completion totals were Bernier (7), Carter (7), and Josefson (8). Josefson did have a gaffe that led to the third Panthers goal, but it was nice to see him come back from that and not let it affect his game the rest of the way.

Defensemen: Marek Zidlicky had one of those games where you can tell he’s having fun at times. I can’t remember the Panther he deked out of his skates and then set up Patrik Elias for a glorious chance, but it seemed like he was doing that quite frequently. He went 19/22 and generated four shots on five attempts. Most of that production came in the first period and he was a force.

Adam Larsson acquitted himself quite well in his first game in New Jersey since 2013. He completed all twenty of his passes and generated one shot attempt—a stretch pass that a Devil fired wide (sorry, can’t recall who it was). Mark Fayne generated one shot and one attempt on 9/11 passing. No one really generated much besides Zidlicky and with the way he can influence a game at times, I wouldn’t be surprised if he’s back next year either. No one else really offers what Zidlicky does. 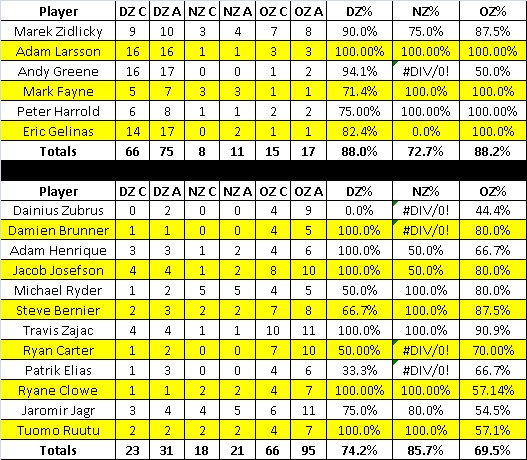 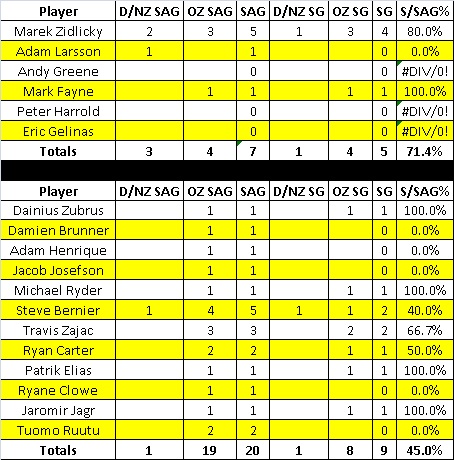 Forwards: This is usually the part where the forwards look much better than the defensemen, but not today. They finished with a sad 42.5 PE%, a good 10% lower than their season average. Elias, Carter, Michael Ryder, and Damien Brunner combined to attempt fourteen zone exits, zero of which maintained possession. The rest of the forwards finished at a 65 PE% rate, so those four were quite poor to say the least. Josefson and Zubrus both were perfect exiting the zone (remember, these are just even-strength numbers, so JJ’s PK turnover won’t show up).

Defensemen: A solid, 58.8 PE% for the defensemen. Zidlicky went 1/3 on possession exits and Eric Gelinas finished 3/7, but other than that, it was a solid effort all around. Peter Harrold led the group with thirteen attempts, seven of which maintained possession. There was only one turnover committed by Gelinas. 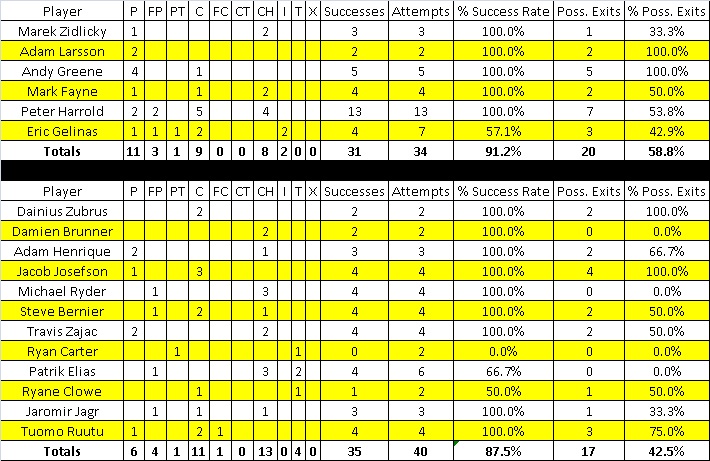