This is a look at the zone exit and passing statistics for the New Jersey Devils' 82nd game of the season against the Boston Bruins on April 13th. Read on for the details.

In a game that meant nothing to the Boston Bruins, they iced a less-than-formidable lineup and the New Jersey Devils pretty much had their way with them. The game had plenty of meaning to the Devils and their fans, especially one Martin Brodeur, who may have (should have?) played his last game for the Devils. It was a game full of emotion, but you don’t read these for emotions. You read these for the dry, truthful stats and cold images of Excel spreadsheets. On this last edition of the Zone Exit and Passing Stats for the 2013-2014 season, it was one for Jaromir Jagr to show just how great he is. Let’s get to it.

Forwards: Jagr completed 18/20 passes in the offensive zone alone (5/6 elsewhere), generated five shots (SG) on seven attempts (SAG) and basically did what he wanted when he wanted to do it. Tuomo Ruutu (10/14) was the next highest with three shots generated on three attempts. Ruutu has been a very efficient player at times and I’ll speak more on that when I write up my season recap, but he’ll be a plus for sure.

Defensemen: Hey, look! Offense from the blue line! In a rare display of shot-generation from the back end, the blue line generated six shots on fourteen attempts. Peter Harrold (19/22, 2 SAG, 2 SG) and Adam Larsson (26/31, 3 SAG, 2 SG) were the more efficient defensemen, as Marek Zidlicky (31/38, 3 SAG) and Jon Merrill (26/34, 4 SAG, 1 SG) had more volume. Andy Greene had poor game overall, one of his worst, as he generated nothing and was a disaster in the zone exit phase of the game. 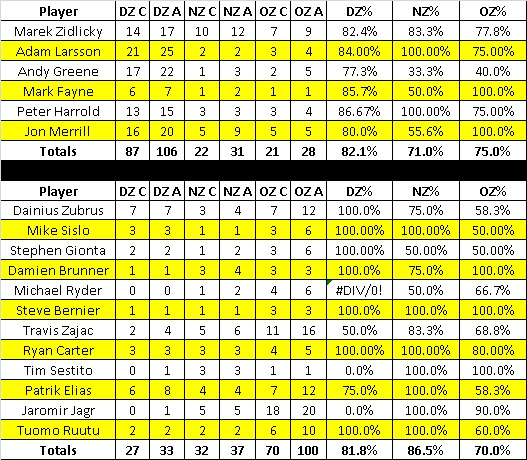 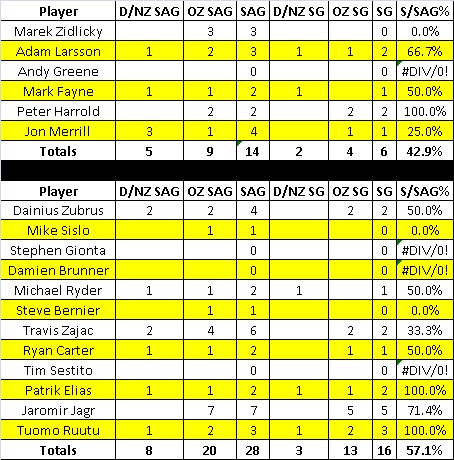 Forwards: Only two turnovers from the forwards and they still only finished with a 51.8 PE%. Five failed passes and four failed carries will bring down a percentage like that. Steve Bernier led the group with eight attempts, but only two were with possession. Tim Sestito had three exits, but none with possession. Those two brought down the group more than others. Elias and Jagr finished at 40 PE%.

Defensemen: Woe unto Andy Greene. Six turnovers and a 15.4 PE% on thirteen attempts. He saved his worst for last. Had his passing been better (like it normally is) he likely could have had five more possession exits, but it wasn’t his day apparently. Fayne, Harrold, and Merrill were all at 50% or higher, but it wasn’t enough to save the group from another subpar zone exit rate of 40.7%. 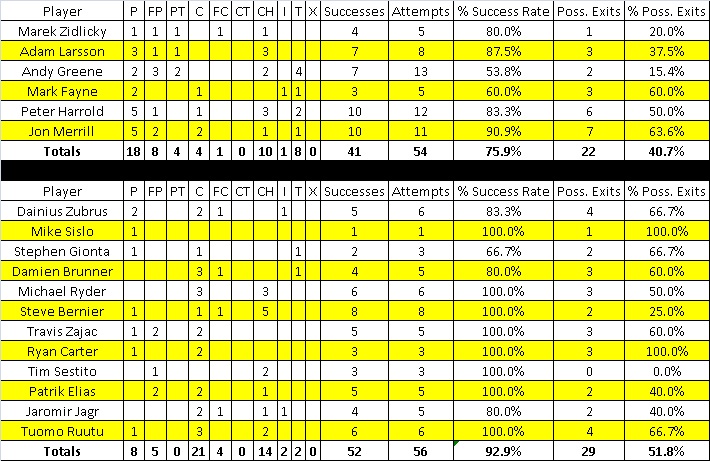