This is a look at the zone exit and passing statistics for the New Jersey Devils' 81st game of the season against the New York Islanders on April 11th. Read on for the details.

Only two goals, a poor shootout, and another high-event game against the Islanders. I think I’ve written these words before. Let’s get to it.

Forwards: Only Steve Bernier (3), Patrik Elias (3), and Jaromir Jagr (2) generated multiple shots (SG). Each of these three generated one more attempt (SAG) than they did shots, so their efficiency rates were very good. Unfortunately, most of the forwards couldn’t say the same. The biggest offenders were Travis Zajac (5 SAG, 1 SG), Michael Ryder (4 SAG, 1 SG), Damien Brunner (4 SAG, 1 SG), and Dainius Zubrus (2 SAG, 0 SG). The combined efficiency rate of these five forwards was 20%, which is horrendous.

Defensemen: All but Mark Fayne generated a shot attempt. Only Marek Zidlicky, Adam Larsson, and Jon Merrill actually generated a shot. Merrill (28/34) was the busiest of the group with Zidlicky (26/31) close behind. Again, the defensemen couldn’t even generate a single shot attempt each. 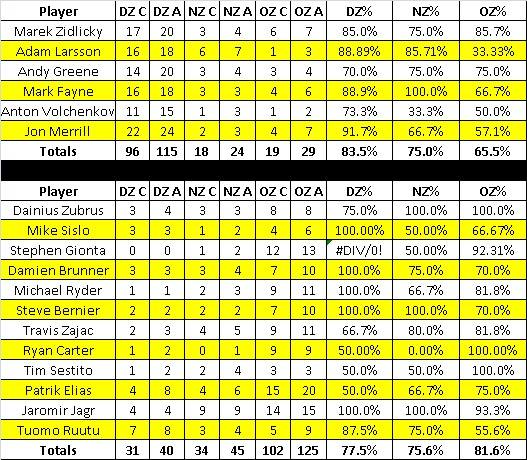 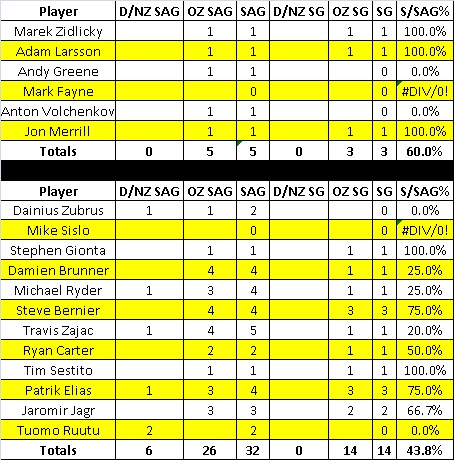 Forwards: Eight total turnovers for the forwards, though the group still finished at a 52.7 PE%. Michael Ryder (3), Elias (2), Ruutu (1), and Gionta (1) were the turnover-culprits. Not a good game from Ryder by either metric, zone exits or passing. He, Ryder, Elias were joined by Tim Sestito as the only forwards under 50%. Ruutu led the group with ten attempts and finished with eight possession exits, another strong game from him in this category. Jagr was next with six attempts and four were with possession. Damien Brunner had a strong exit game as well (80 PE%).

Defensemen: Right around their usual finish: 42.4 PE%. Andy Greene had a really rough time, attempting thirteen exits and only three of which resulting in maintaining possession. His 15.4 PE% is pretty awful. Larsson rebounded from his poor game in Ottawa to go 3/3 in possession exits. The other four of Zidlicky, Merrill, Fayne, and Anton Volchenkov all finished between 40 – 50%, so right around where they usually do collectively. Going into next season, this group can, hopefully, improve at exiting the zone. 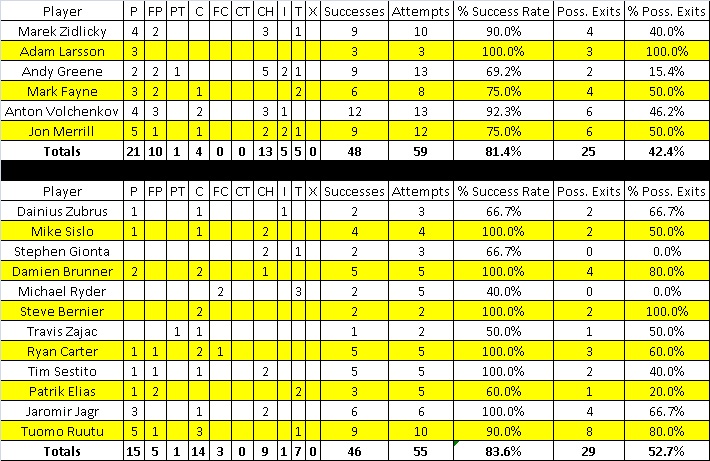