This is a look at the zone exit and passing statistics for the New Jersey Devils' 80th game of the season against the Ottawa Senators on April 10th. Read on for the details.

A slow start led to a strong performance the rest of the way, yet the New Jersey Devils were undone by the shootout. Sound familiar? The team did have a solid passing game as 60% of the shot attempts generated via the team’s passing (SAG) registered as shot on goal (SG). Unfortunately, the Devils couldn’t cash in on their efficiency and left with a single point, not that it mattered. Let’s get to it.

Everyone except for Tim Sestito attempt a pass in each zone, as the Devils were quite active with the puck and attempted nearly 300 passes on the night. The rookie, Sislo, actually put together a decent game as he completed 12/14 passes as well as the aforementioned two shots generated. Steve Bernier was the only forward to go without generating a shot attempt. Damien Brunner, Patrik Elias, Sestito, and Bernier (obviously) were the only forwards to go without generating a shot.

Defensemen: Generating five shots on six attempts is remarkably efficient, but the Devils defense simply cannot generate the volume as a unit on a consistent basis. This game was only decent because Anton Volchenkov generated three shots on three attempts, something he hasn’t done all season. Marek Zidlicky and Jon Merrill each generated a shot and Adam Larsson generated one shot attempt.

Each blue liner attempted a pass in each zone, with Andy Greene the only defenseman unable to complete a pass in the offensive zone. Larsson did not have the strongest game if one wanted to pick out the subpar performer of the group, but he struggled more in the zone exit phase of the game than anything here. 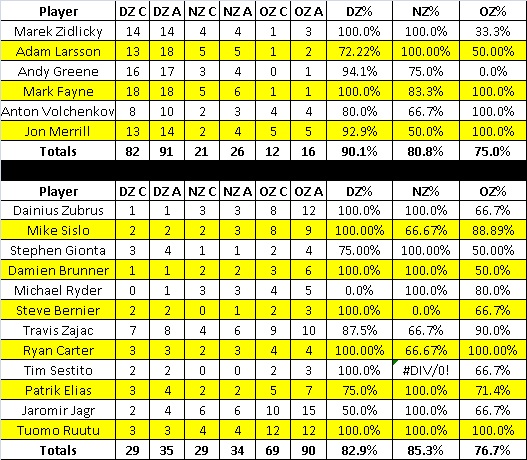 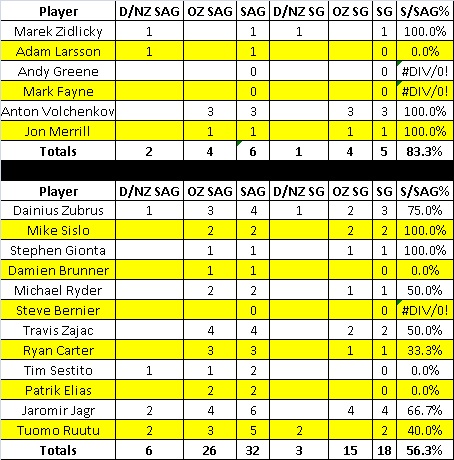 Forwards: 51 PE% with five turnovers. Stephen Gionta joined Zajac, Ruutu, Elias, and Jagr as each turned the puck over once. Jagr, Elias, Zubrus, and Michael Ryder all were below 50% in their possession exit rate. Apart from Ryder, the other three attempted sixteen of the group’s exits, so if they had been just slightly better—they usually are—it would have been a stronger game. Zajac led the way with ten attempts, six of which were with possession.

Defensemen: Larsson committed three turnovers off of poor passes, resulting in a 41.7 PE%. Oddly enough, Larsson, Zidlicky, Greene, and Mark Fayne each wound up attempting twelve exits each. Zidlicky (3) and Greene (2) each added some turnovers to the total, but other than Larsson’s bad showing, the group finished quite strong at 59 PE%. Merrill (71.4%) had the highest success rate, but Fayne had the highest (66.7%) among the four defensemen that led the group in attempts. 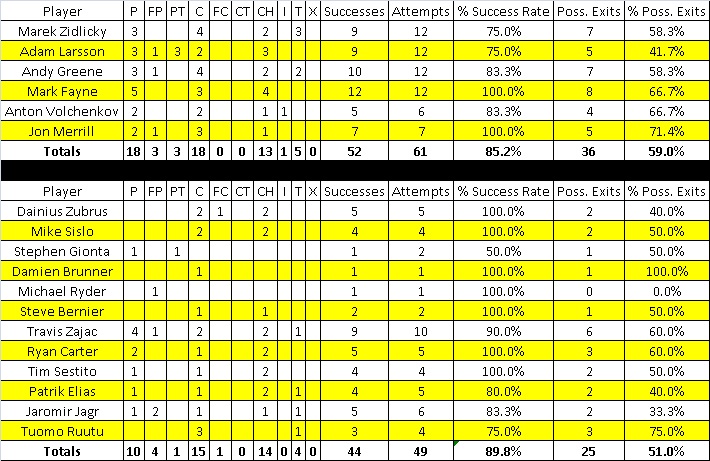 What reaction do you have to these stats? How do they compare with your viewing of the game