This is a look at the zone exit and passing statistics for the New Jersey Devils' 78th game of the season against the Carolina Hurricanes on April 5th. Read on for the details.

The New Jersey Devils went into Carolina a banged up group and eeked out another close game against the Hurricanes. It wasn’t pretty and there were plenty of wasted opportunities in the passing game, but a win is a win. At the time, this put the Devils one point behind Columbus and had Devils fans were happy as the weekend ended. Unfortunately, we all know how the rest of the week would go. This win was the last time Devils fans dreamt of the playoffs in the 2013-2014 season. Amusing, then, that it should be a particularly ugly performance. Let’s get to it.

Forwards: A poor night passing and shot-generation-wise. The forwards converted merely 29.2% of their shot attempts in shots. Woeful. As a group the forwards generated twenty-four shot attempts (SAG) and only seven shots (SG). Now, each forward apart from Mike Sislo generated at least one shot attempt. Jaromir Jagr and Travis Zajac led the way with four each, but only one shot each. Damien Brunner was quite active as he went 15/20 and generated two shots on two attempts.

Stephen Gionta had an efficient game as well, completing all eight of his passes and generating three shot attempts. Tuomo Ruutu (10/12, 3 SAG, 1 SG) and Michael Ryder (7/12, 2 SAG, 2 SG) had some of the better numbers for forwards.

Defensemen: Seven attempts generated and three shots generated—about average production from the blue line. Marek Zidlicky was busiest as he went 23/27 with one attempt generated. Andy Green and Mark Fayne each generated two attempts, but both of Greene’s attempts resulted in shots. Only Eric Gelinas generated another shot from the defense. 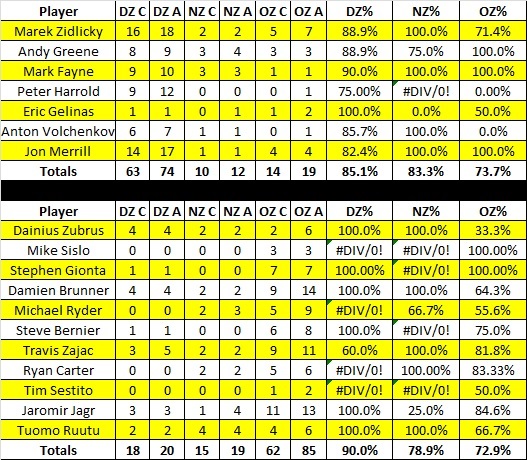 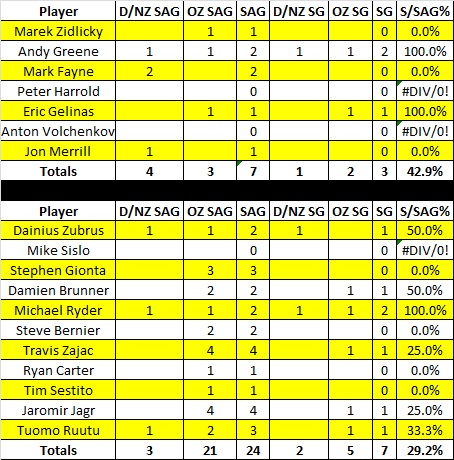 Defensemen: Zidlicky was not good, committing three turnovers and finishing 2/7 on his possession exits. Anton Volchenkov was…well, Anton Volchenkov with zero possession exits on seven attempts and two turnovers. Peter Harrold “led” the group with a 42.9 PE% as this group once again was the Achilles heel of the team. Jon Merrill more than double the next highest defenseman as he attempted fourteen exits, five of which kept possession. 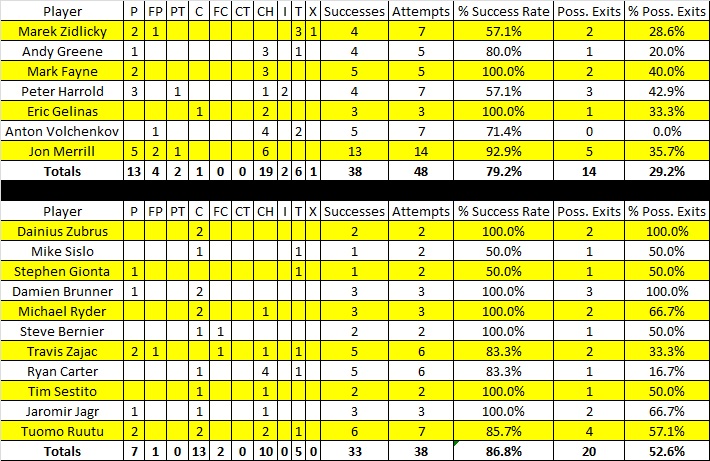