This is a look at the zone exit and passing statistics for the New Jersey Devils' 79th game of the season against the Calgary Flames on April 7th. Read on for the details.

It would happen like this. It had to happen like this. Dominating for most of the game, one defensive breakdown, one goal against, zero goals for. The trio of Jaromir Jagr, Travis Zajac, and Tuomo Ruutu simply, well, dominated in terms of shot-generation. They generated twenty-five shot attempts (SAG), but only eight shots (SG). On the night the New Jersey Devils’ playoff hopes faded to “Countin on a Miracle” Springsteen status, their performance was the perfect example of just who this team has become over the last two seasons: controlling play, getting shot attempts, but losing close games. Let’s get to it.

Damien Brunner had a lively game, going 14/21 passing and generating two shots on three attempts. He could have done better in the final third of the ice with his passing accuracy, but had a jump in his step all night long. Ryan Carter also generated three attempts and one shot and could have (should have?) had a goal if there was a camera underneath the goalie’s legs.

Defensemen: Marek Zidlicky went 10/14 in the offensive zone (28/35 overall) and generated two shots on two attempts. Andy Greene (13/16, 2 SAG, 1 SG) and Peter Harrold (15/15, 3 SAG, 1 SG) were the only other defenseman with multiple shot attempts generated. Harrold actually had a good game around his passing stats.

Once Anton Volchenkov went down with an injury or benching, Eric Gelinas went back to playing defense and didn’t generate any offense (not surprising) and finished 12/15 passing. Jon Merrill was quite busy, second only to Zidlicky in total pass attempts, and finished 25/28 with one shot attempt generated. 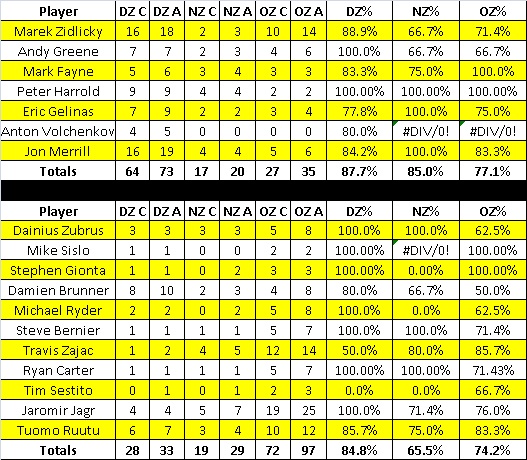 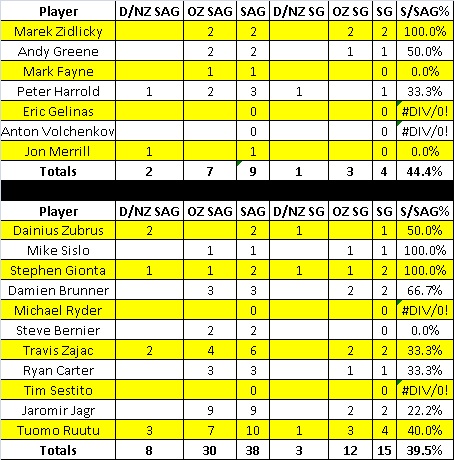 Forwards: A 67.6 PE% pretty much says it all—an incredibly efficient night exiting the zone. This may be one of the highest possession exit rates the forwards have achieved this season. Is it a surprise, then, that it would be one of their strongest SAG nights as well? One of the projects for the summer will be to look at PE% and the team’s SAG and Corsi totals to see how much of a correlation, if any, there might be.

Only Tim Sestito was under 50% as just one of his three exit attempts was with possession. Everyone else was solid, except for the two turnovers committed by Brunner and Michael Ryder.

Defensemen: Only three turnovers as the blue line nearly reached 50 PE%, coming in at 48.6%. Gelinas, Volchenkov, and Zidlicky had the turnovers, but three is not bad for this group. It’s quite good actually. Mark Fayne was the only defenseman under 50 PE% as just one of his exit attempts was with possession. Zidlicky and Merrill led the way with ten and eight attempts, respectively. 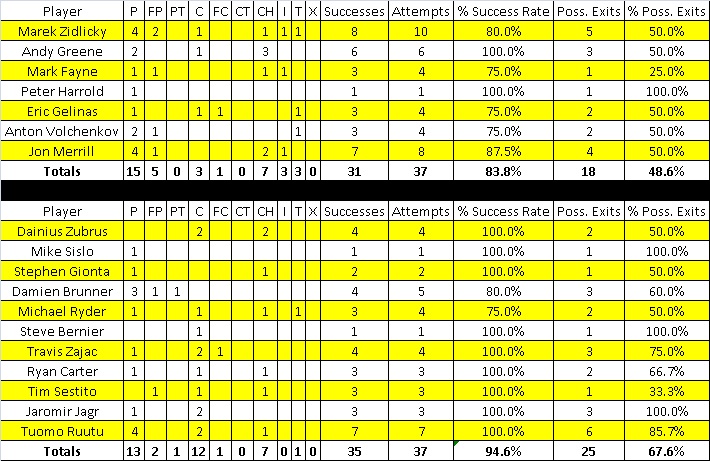