This is a look at the zone exit and passing statistics for the New Jersey Devils’ 77th game of the season against the Washing Capitals on April 4th. Read on for the details.

The Devils started with eleven forwards to begin the game, ten to start the second period, and nine to start the third. They would finish with only eight forwards as injuries to Patrik Elias, Adam Henrique, and Jacob Josefson forced coach Pete DeBoer to rely heavily on his top line of Travis Zajac, Jaromir Jagr, and Tuomo Ruutu. Honestly, there’s very little a coach can do with only eight natural forwards. He did throw Eric Gelinas on as a makeshift third/fourth line with helped if only to give the players a bit more of a breather. In the end it was a hard-fought victory in every sense of that cliché. The Devils got exceptional goaltending from Cory Schneider and goals from Ruutu and Ryan Carter to, at the time, make the playoff chance a little more interesting. Let’s get to it.

Forwards: The aforementioned line of Zajac, Jagr, and Ruutu had a solid game, generating twelve shot attempts (SAG) and nine shots (SG). The trio led the forwards in offensive zone pass attempts s well as total attempts and simply had their way with the Capitals whenever they were on the ice. Should Jagr re-sign for next season, this may be the Devils top line. Based on this game and some others this season, I wouldn’t complain.

Apart from them, only Jacob Josefson (4/4, 1 SAG, 1 SG) and Ryan Carter (4/6, 1 SAG, 1 SG) were the only forwards to generate a shot. Damien Brunner (7/10, 3 SAG) was moving and generating offense, but his production was certainly impacted with Elias and Henrique leaving the game.

Defensemen: Each defenseman generated at least one shot attempt with Marek Zidlicky (4) and Adam Larsson (3) leading the group. Only Zidlicky (2) and Anton Volchenkov (1) generated shots. Larsson had an efficient passing game, missing only once on sixteen attempts. Zidlicky was erratic as usual, finishing 17/25.

Andy Greene (22/27) was the busiest on the night, especially in the neutral zone where he went 8/9. Mark Fayne (16/19) and Peter Harrold (14/17) had quietly efficient nights. Gelinas and Volchenkov didn’t have much volume in their pass attempts. 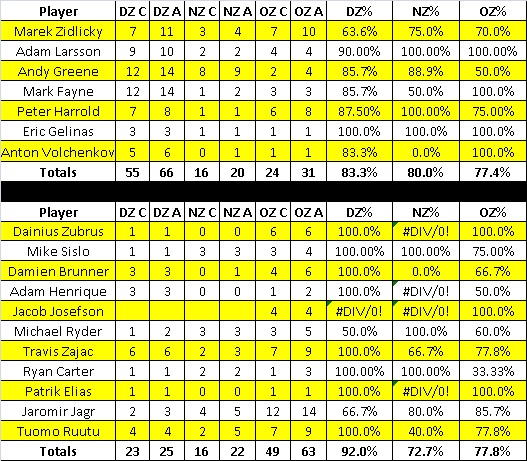 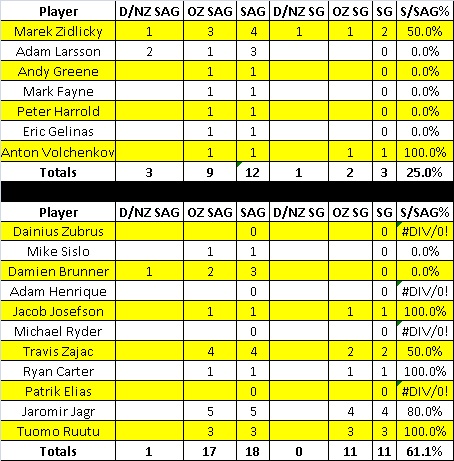 Forwards: Six turnovers clouded an otherwise efficient 52.5 PE% game from the forwards. Dainius Zubrus, Michael Ryder, Brunner, Henrique, Jagr, and Ruutu each committed a turnover. Ruutu actually led the team in attempts (8) and finished with a 75% PE%, so another strong performance in this area for him. Brunner was the next best with 4/5 exits with possession. Carter also had a solid game as 4/6 of his attempts maintained possession. Josefson and Ryder went 0/5 in possession exits, while Zubrus, Jagr, and Mike Sislo went a combined 3/9.Those were your delinquents on this occasion.

Defensemen: As efficient as Larsson’s passing was, his zone exits were, decidedly, not. Only one of his seven exit attempts was with possession and he committed two turnovers. Zidlicky, Fayne, Gelinas, and Volchenkov added turnovers of their own. The defensemen finished at 34.1 PE%, an awful number. Only Zidlicky and Volchenkov were at 50% or higher. Greene led the group with nine exit attempts and only two were with possession. He and Larsson certainly brought the group down. 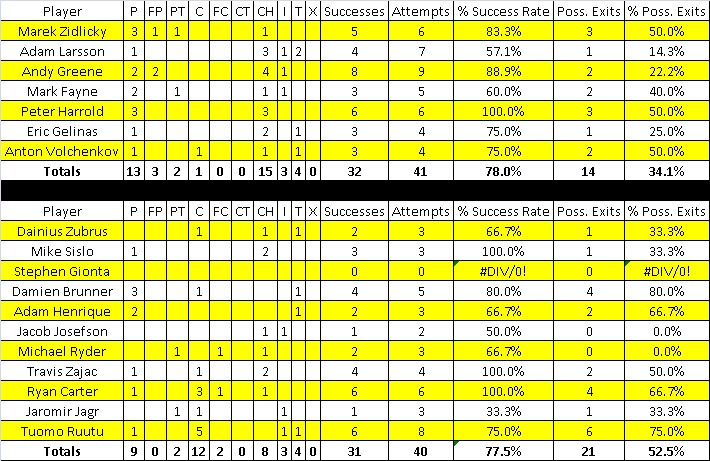