This is a look at the zone exit and passing statistics for the New Jersey Devils' 63rd game of the season against the Detroit Red Wings on March 4th. Read on for the details.

A late Stephen Gionta deflection past Jimmy Howard secured a vital two points for the New Jersey Devils. Some might say that the Devils were even lucky to be in that situation (tied 3-3 in the third) as every time I looked up it seemed like Detroit had the puck and wouldn’t give it away. To compare their last two games, the Devils attempted fifty more passes and generated eighteen more shot attempts (SAG) against the Sharks than against the Red Wings. Of course, they only generated six more shots (SG) against the Sharks, so perhaps they were doing more with less against the Red Wings? Let’s get to it.

Forwards: To reiterate from above, the forwards only attempted fifty-nine passes in the offensive zone, compared to over 100 against the Sharks. Having said that, it doesn’t really matter if you’re Adam Henrique or Patrik Elias lately: they combined for ten SAG and seven SG. Dainius Zubrus had a strong game as he generated three attempts and two shots. Other than that, the offense dried up quickly for the Devils.

Defensemen: Similar to the Sharks game, the defensemen generated eight shot attempts. They added one more shot generated against the Red Wings, but it’s still poor. Marek Zidlicky (3 SAG, 1 SG) and Mark Fayne (3 SAG, 1 SG) were the most productive from the blue line. 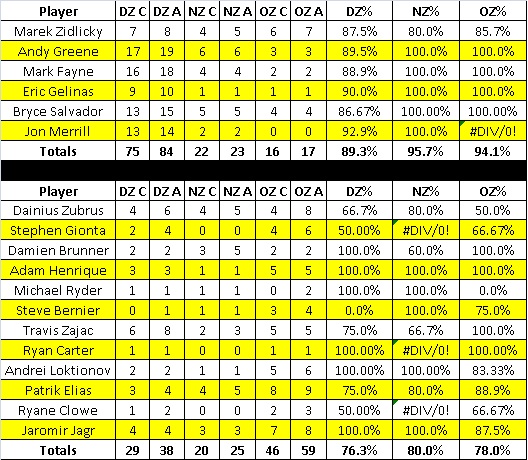 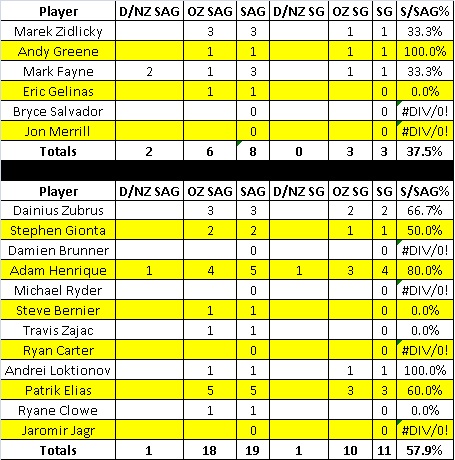 Forwards: Terrible. 37.2 PE% is 15% lower than their season average. Michael Ryder (one possession exit on seven attempts), Elias (3/8), and Ryane Clowe (0/4) were the worst offenders. Zubrus may have been the most efficient forward on the night as he generated offense and had a 60 PE% rate. Eight total turnovers were committed by Stephen Gionta (2), Steve Bernier (2), Travis Zajac (1), Ryan Carter (1), and Elias (2).

Defensemen: Exits were much better than I anticipated (58.3 PE%). Each defenseman was at 50 PE% or higher, with Jon Merrill leading the way at 4/4. There were still seven turnovers between Zidlicky, Fayne, Andy Greene, and Eric Gelinas, but they were at least better coming out of their own end when they weren’t turning it over. 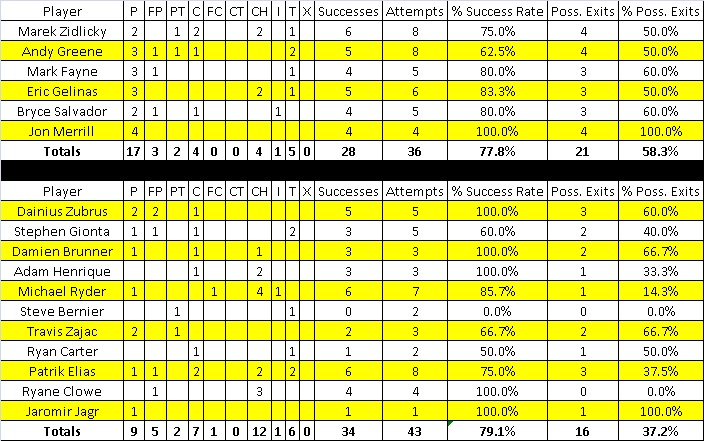