This is a look at the zone exit and passing statistics for the New Jersey Devils 62nd game of the season against the San Jose Sharks on March 2nd. Read on for the details.

This was a game in which the Devils did far better than the NHL shot attempt trackers would have you believe. The Devils generated forty-five shot attempts off of their passing alone against the Sharks, whereas ExtraSkater (which pulls its data from the league) portrays a far different story. This game would be exhibit one in “Devils under-record shot attempts” theory. At first, I was a bit concerned I was seeing things, but after going back and double-checking my work, I stand behind it. This isn’t the first time what I record hasn’t always jived with sites like ExtraSkater put out there from the league play-by-play, but this game represents the largest difference in terms of shot attempts.

Having gotten that out of the way, I’ll get a clearer picture once I track the Sharks side of the passing game, but the Devils forwards had a very productive afternoon. There were several shifts in which the Devils were able to pin back the Sharks and generate attempt after attempt. The fourth line was quite noticeable in the third period and for good reason. Unfortunately, you have to convert on your attempts, and after battling to a 2-2 tie into the third period, the Sharks were able to convert on two opportunities (the last of which on a terrible turnover by Eric Gelinas) to skate away with a 4-2 win. Let’s get to it.

Forwards: A strong performance from the forwards. They generated thirty-seven shot attempts (SAG) and eighteen shots (SG). The ratio could have been better as less than half of their SAG made their way to the net. Only Jacob Josefson failed to generate a shot attempt, which was odd considering he was quite active in the offensive zone and went 10/14 overall in his passing. In fact, the entire fourth line was quite active: Stephen Gionta went 7/9 with two SAG, but Ryan Carter had a fantastic game, finishing 12/16 with six SAG and three SG. This may have been one of his best games as a Devil since I’ve been tracking these.

Jaromir Jagr (13/18, 3 SAG, 2 SG) has been more accurate lately and still generating chances for his line mates. Travis Zajac (12/16, 1 SAG) had an okay game. Dainius Zubrus (8/9, 3 SAG, 1 SG) had an okay game as well. Is it just me, or does this line seems to have hit a wall of sorts? Maybe because Henrique and Elias have been tearing it up makes it look like they aren’t as productive.

In Andrei Loktionov’s penultimate game with the Devils, he went 7/8 with two SAG and one SG. Ryane Clowe and Michael Ryder were a little quieter without Henrique, but still okay.

Defensemen: Having praised the forwards above, the defensemen were big on quantity, not so much on quality. The group generated eight shot attempts and only two shots. Marek Zidlicky (27/32, 3 SAG, 1 SG), Eric Gelinas (24/27, 4 SAG), and Jon Merrill (17/20, 1 SAG, 1 SG) were the only blue liners that generated anything off of their passing.

The group finished above 82% completion rate in each zone, which is quite good. The trio of Merrill, Gelinas, and Zidlicky were incisive in their offensive zone passing as they combined to go 18/19. No real negatives from a passing standpoint, but you would have liked to see more shots generated as opposed to just attempts. 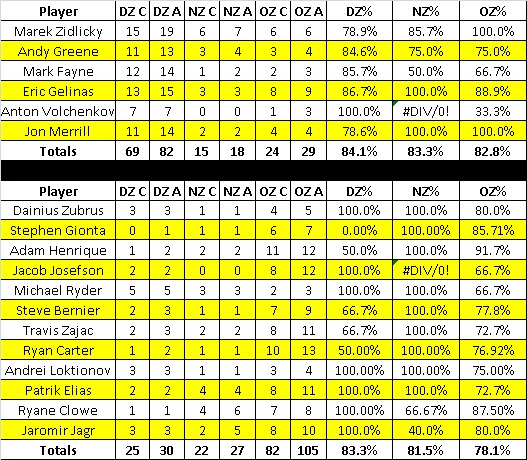 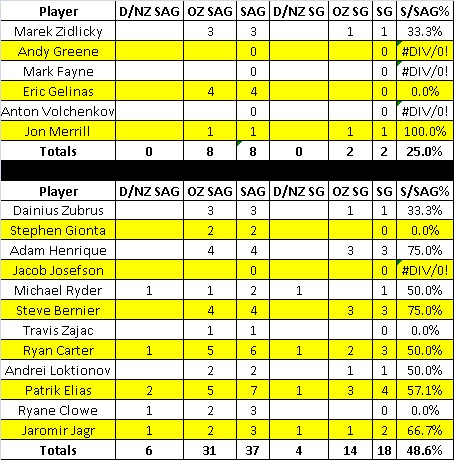 Forwards: Four turnovers for the forwards (Josefson, Gionta, Bernier, and Zajac) as the group finished 5% lower than their average performance at 47.6 PE%. Ryder actually led the group with six attempts, four of which were with possession, so at least he’s transitioning defense to offense while he’s not scoring. The attempts were spread out quite evenly with each forward other than Ryder attempting between two and five zone exits. Most were at 50%, but a few were under, so the group finished slightly under as well.

Defensemen: Finishing at 42.2 PE% is about right for the defensemen. It’s their season average. Zidlicky was lowest among the defense with only two of his nine exit attempts maintaining possession. Gelinas also attempted nine exits, but finished with a 55.6 PE%, good to lead the group on the day. Andy Greene led the group with eleven attempts, but only five with possession.

Unfortunately, the defensemen committed eight turnovers against the Sharks. Zidlicky, Greene, Gelinas, and Mark Fayne each committed two while Merrill and Anton Volchenkov were turnover-free. 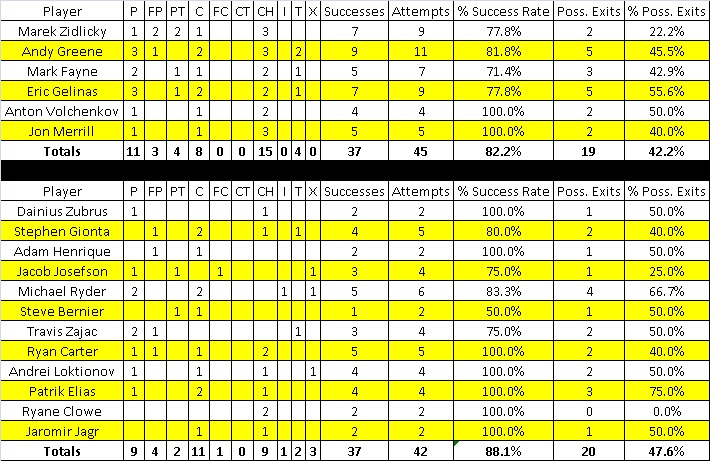