This is a look at the zone exit and passing statistics for the New Jersey Devils' 61st game of the season against the New York Islanders on March 1st. Read on for the details.

In a game where nearly an entire period was played via special teams, the Devils dominated in all phases. The Islanders put forth their best effort in the first period, but even then they skated away down 1-0. Martin Brodeur was sharp early on, but would see his team strike repeatedly in the second period to put the game to bed inside the first forty minutes. As a result of the extended power play time, the stats are a bit lower than usual as these are only even strength stats. Let’s get to it.

Forwards: Ryane Clowe was a shot-generating machine against the Isles. He finished 10/13 passing with five SAG and four SG, highest totals on the team. Very strong game from Clowe. In terms of volume, Michael Ryder (11/14, 3 SAG, 1 SG), Andrei Loktionov (13/14, 3 SAG, 1 SG), and Patrik Elias (10/12, 3 SAG, 1 SG) were the next forwards behind Clowe as each of them generated three shot attempts apiece.

Travis Zajac was the only forward after Clowe that generated multiple shots (2). He finished 11/19 with 2 SAG as well, not the sharpest night from Zajac. Adam Henrique had a quiet game at even strength, completing each of his nine passes, but failing to generate a single shot attempt. Only Ryan Carter (5/6) and Jacob Josefson (3/3) joined Henrique in that department.

Defensemen: Jon Merrill was the most effective at generating offense as he finished with three shot attempts generated (SAG) and two shots generated (SG). The workload was pretty even as Marek Zidlicky, Andy Greene, and Mark Fayne all finished with seventeen pass attempts. Greene finished slightly better with only a single incomplete pass. Eric Gelinas was the only other defensemen to generate a shot (1) apart from Merrill. 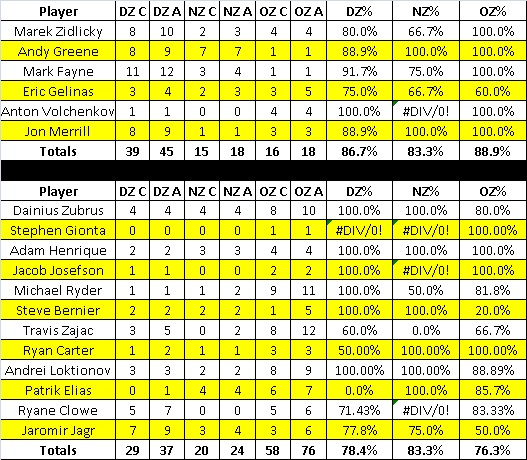 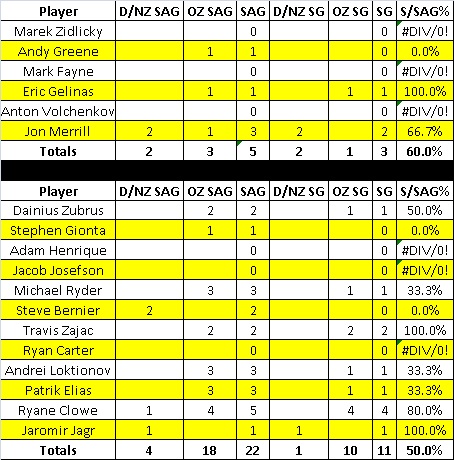 Forwards: Of the forwards with at least five exit attempts, Loktionov was best at 85.7 PE%. Josefson (80%) and Clowe (60%) were next. Zajac continued his off-game performance as he finished with only a third of his exit attempts (2/6) maintaining possession. Overall, a solid, 60.4 PE% for the forwards.

Defensemen: Only twenty exit attempts for the defense, five of which were with possession. Most of these turnovers and exits without possession occurred in the first period as the Isles created several chances off of turnovers and forced the Devils to run around a bit in their own end. A lot of chips out of the zone were in the third as the Devils were trying to kill the game off before they ended it on a seven-minute power play. Greene and Merrill each led the blue line with five attempts. Overall, not a great night. 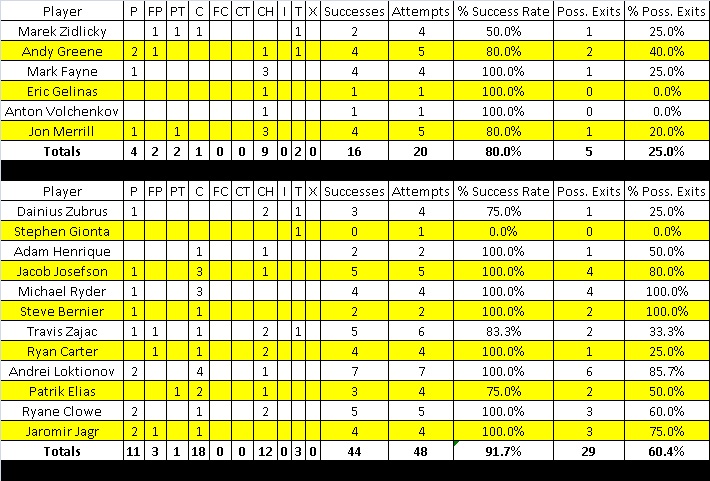