This is a look at the zone exit and passing statistics for the New Jersey Devils' 73rd game of the season against the Phoenix Coyotes on March 27th. Read on for the details.

The shootout woes continued against the Phoenix Coyotes. Personally, after watching the New Jersey Devils swarm in the overtime period, I’m all in favor of extending it. The Devils fell behind 2-0 to the Coyotes and if not for a last-gasp goal off of a Jon Merrill centering pass in the second period, this game might have been far more depressing than it turned. Adam Henrique (who else?) tied it in the third period and the Devils earned a point as they kept their faint playoff hopes alive. Let’s get to it.

Defensemen: Marek Zidlicky had a strong game at the offensive end of the ice, generating four shots on six attempts. Overall, his accuracy was lower than usual, even by Zidlicky-standards, as he completed twenty-six of his thirty-six pass attempts. Andy Greene was the busiest defenseman in the defensive zone, attempting twenty four passes there alone, but still was able to get forward enough to generate four shot attempts—unfortunately, there were no shots as a result.

Peter Harrold did his usual thing: generate chances (3 SAG, 1 SG) and miss on passes. He finished 16/26 for a team worst 61.5% completion rate. Jon Merrill went 18/22 and generated one shot on one attempt. Mark Fayne played a steady game, completing all but one of his nineteen passes and generating one shot attempt. 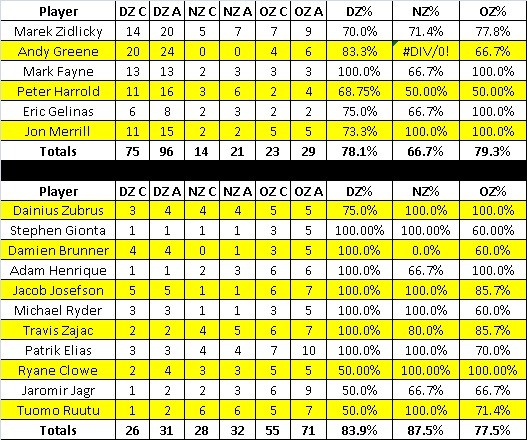 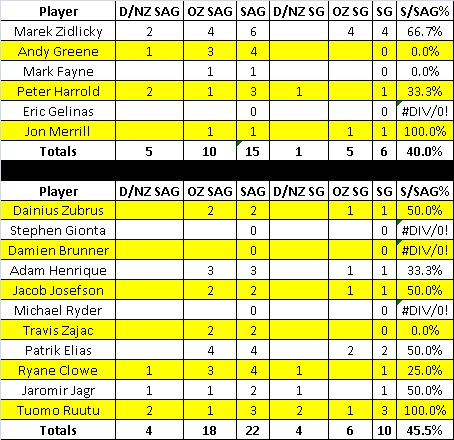 Forwards: Not a bad performance from the forwards (54.8 PE%). Only Stephen Gionta, Elias, and Ruutu were under the 50% mark. Jagr and Ruutu had the group’s only turnovers. The attempts were spread quite evenly as each forward attempted no fewer than two attempts and no more than five.

Defensemen: Eight total turnovers, so at least they are out of the double-digits, but the defensemen turned in a poor performance. If any area of stats I track are continually cause for concern, it is this one. The Devils defense simply does not exit the zone with possession enough. Think about it for a second. This team has trouble scoring, so if their defensemen cannot make that all-important breakout pass to transition defense to offense even fifty percent of the time, the team’s possessions are limited, and by extension their chance to generate offense are limited.

Only Mark Fayne and Eric Gelinas finished at or above the 50% mark, but they combined to attempt only nine zone exits. The majority of the exits were attempted by Greene, Harrold, and Merrill. No one was good. Merrill had three turnovers, Harrold and Greene each had a turnover and an icing. There were a lot of missed passes, eleven to be precise, which gifted possession back to Phoenix. 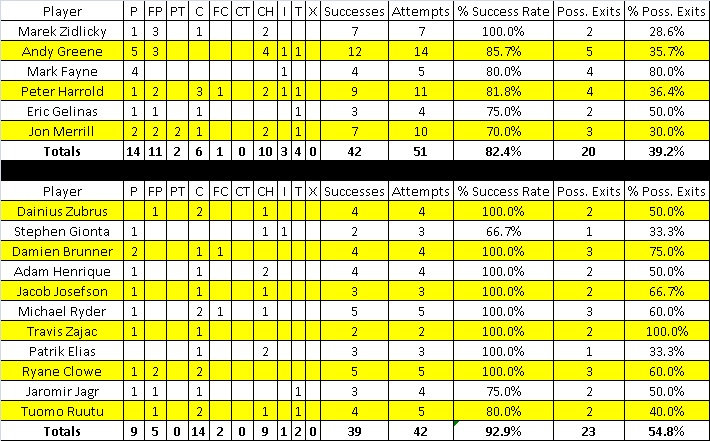