Even with Recent Drop in Save Percentage, Cory Schneider is Better than Martin Brodeur

Cory Schneider was amazing through January until the Olympic break. He has been decidedly not amazing while Martin Brodeur has returned to regular action. Despite Schneider's drop in save percentage, he's still the better goalie.

Share All sharing options for: Even with Recent Drop in Save Percentage, Cory Schneider is Better than Martin Brodeur

Way back in early January, I continued looking at the cumulative save percentages of both Martin Brodeur and Cory Schneider for the New Jersey Devils.  Both weren't good in December.  While Schneider was superior to Brodeur at stopping more shots, selecting a goaltender has clearly been a short-term decision based on recent performances.  However, that began to change at the turn of the new year.

In the eighteen games between January 1 until the Olympic break (February 8 for the Devils), Schneider started in twelve of them and appeared in thirteen.  Brodeur didn't see the ice since getting demolished by Our Hated Rivals until March.  When that game happened, it looked to be the end for Brodeur as a goaltender who should be starting regularly. Perhaps as it should have been a while back.   Peter DeBoer's decisions on who to start spoke more loudly than anything he'd say to the press.  And Schneider was sensational throughout the majority of those twelve starts, which surely helped justify the decisions made.

This has not continued after the Olympics.  Schneider has been lit up a bit that has sent his save percentages down. And at even strength, it's been dragged down to the level of Brodeur.  Here's a game-by-game graph of their save percentages: 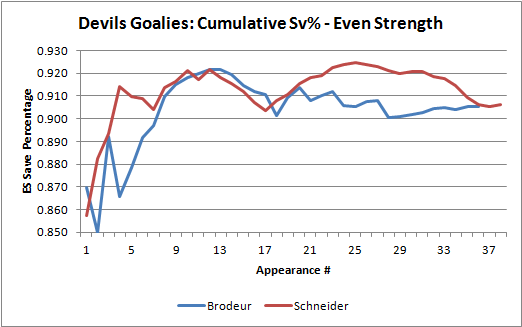 Schneider's 32nd appearance was the last game before the Olympic break.  Then, he had an even strength save percentage of 91.9%.  For comparison purposes, Brodeur was at 90.1% after conceding six even strength goals on twenty even strength shots in the Bronx.   In the following five games, Schneider's ESSv% dropped to 90.6%.   His starts against San  Jose (17-21), Detroit (23-29), and Florida (15-19) sunk that figure like a rock.  Schneider's most recent start was his first game where his ESSv% ended above 90% since February 7.  This isn't to say Schneider is at fault for all of those goals against, but it definitely proved he came back down after an awesome run.

Meanwhile, Martin Brodeur sort of, kind of not screwed everything up.  He his first piece of action on March 1 as part of a back-to-back set and did well in a rout of the Isles.  He wasn't good the rest of the way.  Brodeur was legitimately great against the Flyers on March 11, and he's only been beaten at evens for more than three goals once since March 1.   That said, it's hard to come back without a string of great performances.  Not being a sieve is a step forward, but not a big one. So his ESSv% only rose to 90.5% from his eight most recent starts.

Since save percentage is currently the most reliable stat to determine whether a goalie is doing his main job, it appears that it's really not such an easy call between Brodeur and Schneider.  Right?  Well, no.  While even strength play is the most common situation in hockey and where the majority of shots and saves will be made, we should consider special teams situations in determining who's been better.  Here, the gap remains as true as it as been for most of the season: 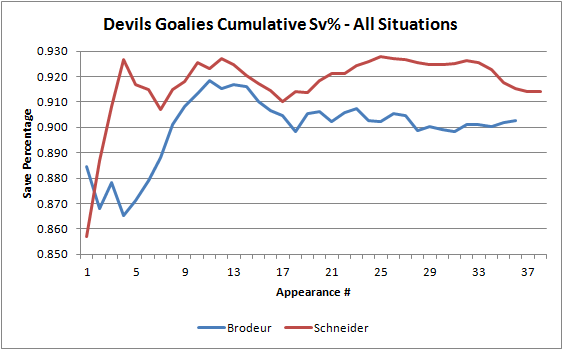 Even with Schneider's save percentage suffering from those starts against the Sharks, Red Wings, and Panthers in March, he's still considerably ahead of Brodeur.  He has been since their second respective appearance of the season.  While even strength events have driven Schneider's save percentage down in recent games, he's still a full percent ahead of his fellow goaltender. While Brodeur has truly been a bit better at evens, he hasn't improved as much overall.  His overall save percentage of 89.9% actually went down a bit before it inched up to his current 90.3%.  the larger takeaway of looking at this graph is that gap is undeniable.  Even if you call three games where the team played like junk behind their own red line a slump, Schneider remains as superior.

I can't say that Schneider's performance overall has been excellent since he's currently just above league average at 91.3%.  And it is harder to improve save percentage without multiple strong performances in a row.  Yet, I have much more faith and confidence in Schneider getting better than Brodeur getting close to that average mark.   He's been well above it earlier this season and he's done it recently in the past.  Again, save percentage is currently the best method for measuring how well a goalie does his job.  Schneider's been better than Brodeur at at that even post-Olympics.  This is why I have found it baffling that Brodeur has received (and may still receive) non-back-to-back starts.

I can respect and understand the idea that selecting a starter is a short-term decision.  Why try to consider who would end up better over a whole season to determine who should play today or tomorrow?   But it appears to have cost the Devils points that they are sorely missing now.  Maybe you may not think it is that a big of a deal, though?  After all, the majority of you have pointed the finger at the lack of goalscoring over the goalies or even DeBoer. In any case, what was decided has been done.   Whether or not Brodeur starts only three more games or more (or less) may truly be moot.