This is a look at the zone exit and passing statistics for the New Jersey Devils' 72nd game of the season against the Toronto Maple Leafs on March 23rd. Read on for the details.

After their deflating loss the previous night to the New York Rangers, the New Jersey Devils needed to bounce back against a ripe-for-the-taking Toronto Maple Leafs team that had lost four straight. They did just that, chasing James Reimer from the net after putting three goals past him just a few minutes into the second period. They held off the comeback attempt and left the ice 3-2 winners. Let’s get to it.

Forwards: The shot-generation was much more spread out against the Leafs than against the Rangers, as only Patrik Elias went without generating either a shot attempt (SAG) or shot (SG). Dainius Zubrus led the way with three shots generated on five attempts, to go with his solid 18/21 passing effort. Ryan Carter (7/7) was just behind Big Z with two shots generated on four attempts.

Defensemen: The defensemen were far less active in the offensive zone in this game, attempting only thirteen passes there. Jon Merrill, Marek Zidlicky, and Peter Harrold were responsible for generating all the shooting opportunities as they combined for nine attempts and four shots generated. The group didn’t have much of a presence in the neutral zone either, with only eight pass attempts. 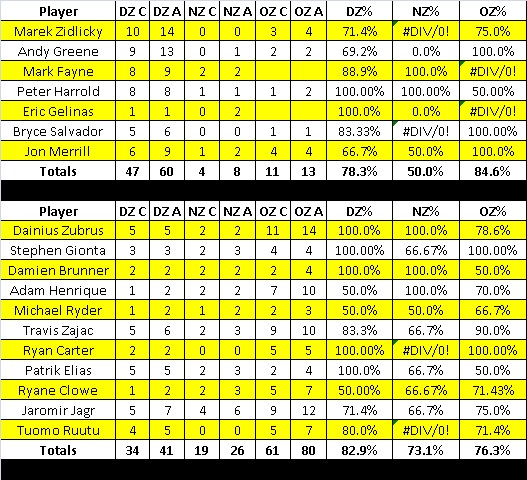 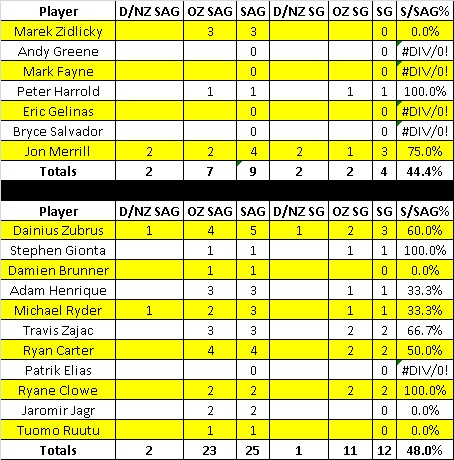 Forwards: The exited the defensive zone with possession 53.3% of the time against the Leafs. Elias (16.7%), continuing from his subpar passing effort, was the lone dud among an otherwise strong team performance. Damien Brunner had a turnover and finished at 40 PE%. Adam Henrique and Zajac each committed a turnover, but finished at or above 50 PE%.

Defensemen: After a strong game against the Rangers, the Devils defense came back down to Earth with a 41.0 PE% performance. Merrill and Zidlicky were turnover-free, while all of the other defensemen had at least one, and the Captain had two. 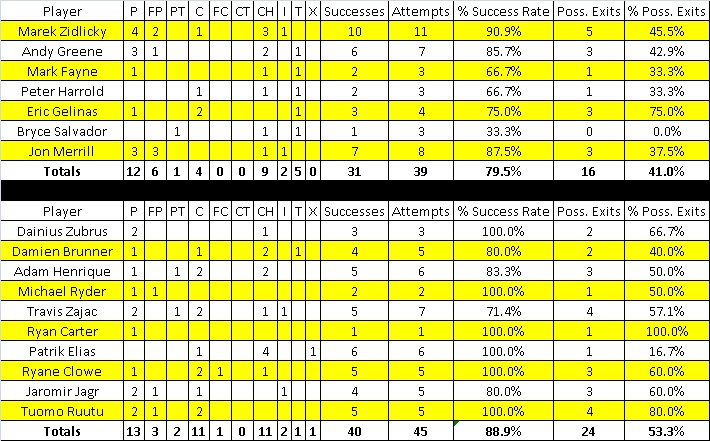