This is a look at the zone exit and passing statistics for the New Jersey Devils' 71st game of the season against the New York Rangers on March 22nd. Read on for the details.

The New Jersey Devils needed a win against the rival New York Rangers in a bad way. The effort put forth by the skaters and a solid performance in net from Martin Brodeur cannot be faulted. The execution, however, most certainly can. The Devils attempted nearly three hundred passes at even strength in this game, generated thirty-nine shot attempts (SAG) via their passing, and spend considerable time in the Rangers defensive zone. Unfortunately, of those thirty-nine shot attempts, a mere eleven resulted in actual shots on net (SG). This is a story we’ve heard all too often with these Devils, going back to the lockout season. Alas, we hear it once more. Let’s get to it.

As you can see, it was quite balanced between these five as they each attempted between twenty and twenty-two passes. Tuomo Ruutu and Adam Henrique were less impactful as each generated two shot attempts, but no shots. Steve Bernier generated three attempts but none found the frame of goal either.

Defensemen: With Anton Volchenkov leaving due to injury, the other five blue liners had to shoulder the load. They came through it with a solid performance. The quintet of Marek Zidlicky (5), Andy Greene (2), Mark Fayne (2), Bryce Salvador (2), and Jon Merrill (3) generated fourteen shot attempts and five shots. Not the best S/SAG% (35.7%), but the volume put forth by the defensemen was admirable. Zidlicky (26/30) and Greene (26/28) both attempted at least ten passes in the offensive zone alone. Fayne was the only defenseman to generate multiple shots (2). 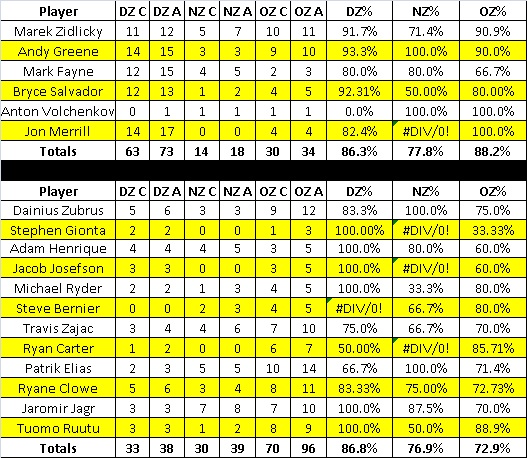 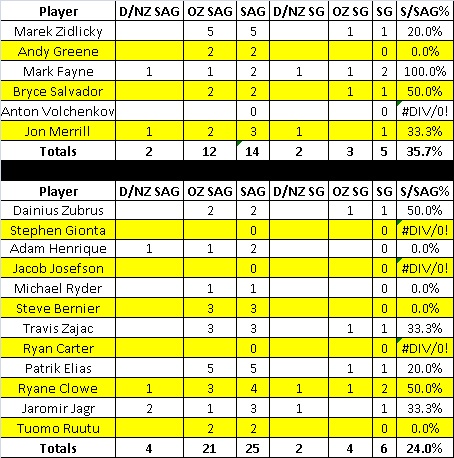 Forwards: Six turnovers isn’t bad for a night the forwards finished with a 61.7 PE%. In fact, every single forward was at or above fifty percent. The only real fault with the group were the turnovers: Jagr (2), Elias, Clowe, Josefson, and Gionta with one each. Zubrus had the best night as he went 6/8 with possession. Josefson had the next highest attempts (7), with four maintaining possession. Michael Ryder went 4/6 exits with possession and was turnover-free, so a positive night for him.

Defensemen: With a 52.4 PE%, the defense group’s fine play extended beyond just their passing and shot-generation. They still committed nine turnovers, so it wasn’t all roses, by any stretch. Zidlicky (2), Greene (2), Salvador (2), and Merrill (2) each committed multiple turnovers. Fayne had one as well. Despite the turnovers, Zidlicky and Fayne led the blue line with a PE% at or above 70%. Merrill (37.5%) and Greene (41.7%) had subpar efforts exiting the zone. 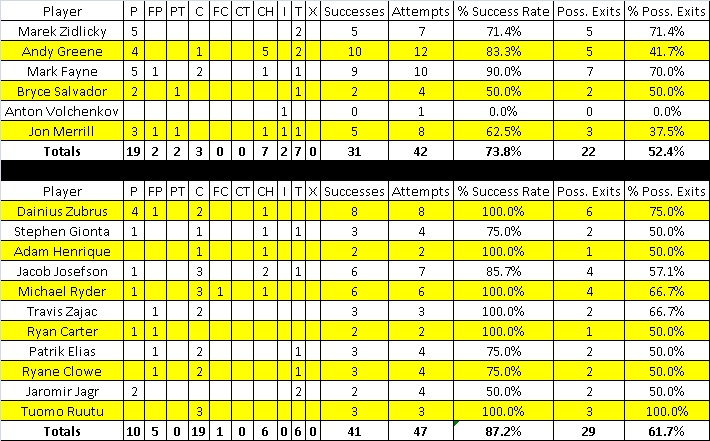