This is a look at the zone exit and passing statistics for the New Jersey Devils' 70th game against the Minnesota Wild on March 20th. Read on for the details.

The New Jersey Devils came out very strong against the Minnesota Wild and dominated the shot count for much of the first and second periods. Two bad goals against in the third gifted the Wild a loser point, but otherwise were the only blemishes on an otherwise solid performance. Let’s get to it.

Forwards: The damage was done by the top six forwards in this game. Patrik Elias led the way with four shots generated (SG) on five attempts (SAG). It was a strong turnaround from the Boston game for Patty. He only misfired on one of his fifteen passes as well.

After Elias, most of the team’s shot attempts were generated from Jaromir Jagr (4), Adam Henrique (3), Travis Zajac (3), Tuomo Ruutu (3), and Ryane Clowe (2). Other than Elias, only Zajac generated multiple shots, however.

Defensemen: The blue line generated the same amount of chances as in the Bruins game earlier this week: ten shot attempts and six shots. Marek Zidlicky was still a bit off in the offensive zone (3/7), but managed to generate three shots on four attempts. Except for Jon Merrill, all other defensemen managed to generate a shot attempt, with Andy Greene, Eric Gelinas, and Bryce Salvador generating one shot apiece. 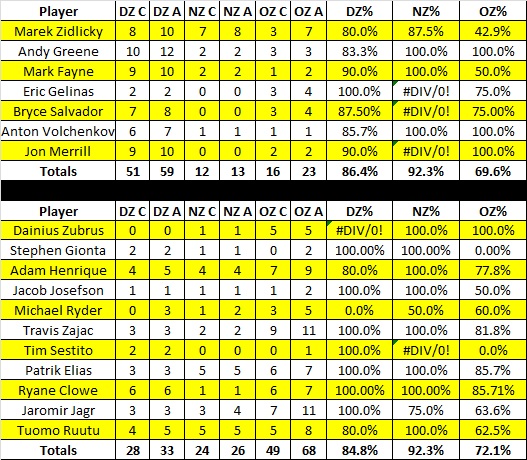 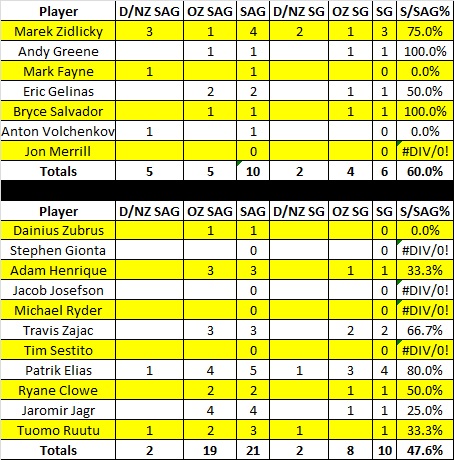 Forwards: Defensemen: Gelinas didn’t record an exit attempt as Deboer kept him limited to power play and overtime play for the most part. Other than Mark Fayne’s single possession exit on four attempts, everyone was at 66.7 PE% or higher. The Wild simply couldn’t forecheck or generate any type of pressure for most of the game. The Devils could exit with possession almost at will and get into the offensive zone to set up shot rather easily. The game certainly didn’t feel like a 4-3 OT win. 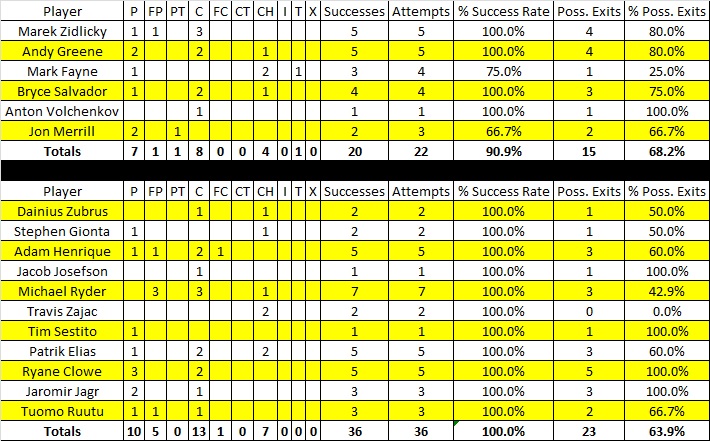