This is a look at the zone exit and passing statistics for the New Jersey Devils' 69th game of the season against the Boston Bruins on March 18th. Read on for the details.

Is anyone else tired of playing the Boston Bruins? After being dominated in the first period, the New Jersey Devils were lucky to go level early in the second period. Unfortunately, Boston struck twice inside of two minutes and then simply saw out the rest of the game in comfortable fashion. Most of what the Bruins were able to do came off of forcing turnovers in the Devils defensive zone. The Devils committed twenty such turnovers and were poor exiting the zone overall. Their passing game generated thirty-three attempts (SAG), but only fifteen shots (SG). Let’s get to it.

Forwards: Jaromir Jagr had himself a game, completing 22/27 passes and generating three shots on four attempts. Ryane Clowe (16/22) led the team with five shot attempts generated, but only saw two shots generated as a result of those efforts. Michael Ryder (8/11) added four SAG and two SG himself.

Defensemen: The defensemen did their part in terms of shot-generation, as they were able to create ten shot attempts and six shots. Marek Zidlicky was off the mark with his passing on the night, finishing 20/28 with three SAG and one SG. Andy Greene (26/30, 2 SAG, 2 SG) and Eric Gelinas (28/33, 3 SAG, 2 SG) were the only defensemen to generate multiple shots. 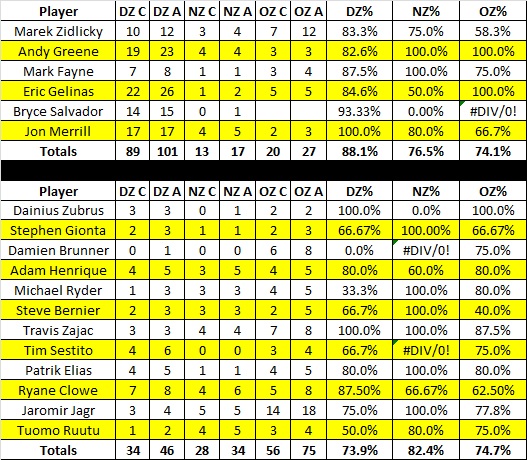 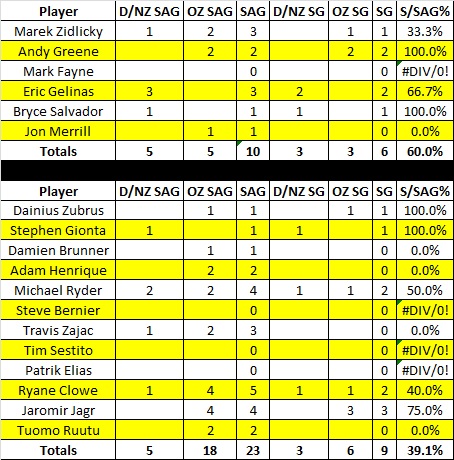 Forwards:Damien Brunner, Dainius Zubrus, and Jagr were the strongest at keeping possession while exiting the zone. Other than that, there wasn’t much to be excited about.

Defensemen: Ten turnovers, six defensemen. Salvador finished with three turnovers, while Zidlicky, Greene, and Gelinas each had two, Fayne had one, and Merrill was perfect in his four exit attempts, keeping possession with each one. Apart from Gelinas’ two turnovers, his other five exits were with possession, so it was an up-and-down night for the rookie. 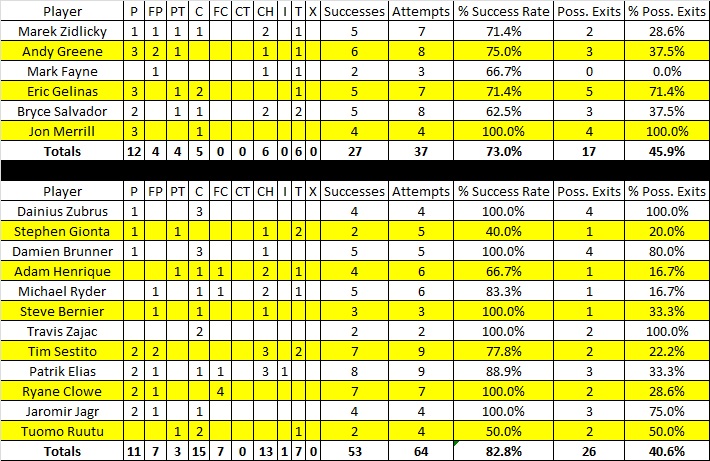