The Future is Here: Passing, Shot-Generation, and Winning

With ten games of opposition data, this article examines the passing statistics I've created this year and how they relate to the outcome of the a game, specifically winning percentage and points percentage. Read on for the details.

Share All sharing options for: The Future is Here: Passing, Shot-Generation, and Winning

Over the Olympic Break, I posted four articles comparing the passing data of the New Jersey Devils against their opponents for four games: the Washington Capitals, Nashville Predators, Colorado Avalanche, and Edmonton Oilers. You can read those here, here, here, and here.

Now, those posts didn’t seem to generate too much discussion, so I’m hoping a more comprehensive article with more data will. This article will look at the passing and shot-generation totals for ten of the Devils opponents: the four mentioned above as well as the Dallas Stars, Columbus Blue Jackets, New York Islanders, San Jose Sharks, and the home and home series against the Detroit Red Wings. This is a good mix of teams with respect to conference and standings.

The logic behind doing this stems from how we use Corsi. If a team attempts forty shots in a game and their opponent attempts twenty, the team with the larger percentage of shot attempts wins the Corsi battle and has the higher CF%, in this case it would be 66% (40/60). So, I started to wonder if a team wins the larger percentage of any of the passing and/or shot-generation stats I’ve created, how might they affect a team’s chances at winning?

To start out, let’s take a look at the totals for the Devils and their opponents for the last ten games.

Apart from the Devils forwards in the neutral zone, the Devils were more accurate in each zone than their opponents as well. One would think this might point to a competitive performance in these ten games, and the Devils did go 5-3-2 in them, but that is not a sparkling record by any means. It’s okay. So, we move on to shot-generation.

Here we notice that the Devils defense generates a smaller percentage of the team’s shot attempts (SAG) and shots (SG) than the opposition. Perhaps this is by design in Pete Deboer’s system, or, and I believe this to be more likely, there just isn’t the talent on the Devils blue line as there is on other teams they’ve played. That being said, the shot attempts generated by the Devils defense are converted into shots on goal at a 52.2% rate, compared to only 44.9% of their opposition. This figure is the S/SAG% and will be a key stat going forward (more on that later). The Devils forwards are still better than their opposition, but just barely at 49.4% to 48.7% in terms of S/SAG%.

When looking at passes by zone for the Devils and their opponents, what we see here falls in line with what we saw when looking at the team’s overall pass attempts. The Devils are nearly even in terms of pass attempts in the defensive and offensive zones (42.5% to 40.9%); the Devils opposition shows a much more significant disparity (53.5% to 31%). Again, this may be due to systems and how teams approach the Devils or simply how the Devils force teams to play at times.

While the Devils dominate the offensive zone possession and have a small edge in the neutral zone, their opponents control possession in their own end. The teams are about even in overall possession.

After tracking the opposition for each of these ten games, I noted who won each of the stat categories I’ve come up with this season as well as the result of the game when they won each category. These were: completion percentage in each zone, possession in each zone, overall possession, SAG/Pass%, SG/Pass%, and S/SAG%. I then added two more that were similar to Corsi, but for SAG and SG, respectively. You’ll see those on the chart as Poss. SAG% and Poss. SG%. Lastly, I compared the Even-Strength percentages for Corsi and Fenwick to everything else. 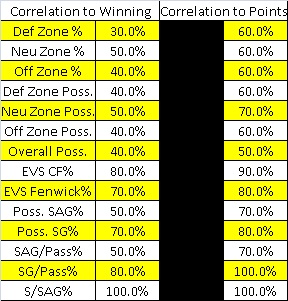 I ranked each stat based on its correlation to winning percentage as well as points percentage. You’ll see that being accurate doesn’t account for much as a team will only win a game 30 – 50% of the time and only earn points 60% of the time if they win the accuracy battle.

Even-strength Corsi is just ahead of Even-strength Fenwick in both winning percentage (80% to 70%) and points percentage (90% to 80%). The Poss. SAG had similar correlation percentages as the neutral zone possession, but Poss. SG had numbers identical to Fenwick.

At this point, I thought Corsi—at least for these ten games—was the strongest indicator of a team winning the game. But, the team that finished with a better S/SAG% won each of the ten games. Here’s why I think that makes sense.

S/SAG% and Why it Matters

If a skater approaches the goalie with the puck and unleashes a shot, there a several data points that the goalie is processing in a matter of seconds: Who is the shooter? Are they right-handed? Left-handed? What are my defensemen doing in front of me? Where will I direct the rebound? Should I freeze the puck? Where has this shooter scored on me previously? Glove side? Five-hole? Will they pass it?

I imagine all of these thoughts go through a goalie’s mind as they prepare themselves to stop a shot. Now, if that player elects not to shoot but to pass it to a teammate instead, then the goalie has to reset all of that data and start fresh as it’s now a new shooter from a different location on the ice.

That is why I believe that it’s better to score off a pass—you’re giving the goalie less time to set up for a shot. This is nothing new to fans of hockey and certainly to the players. But, we’ve never had a stat to represent it until now.

S/SAG% is a way to measure the quality of a team’s shot attempts. Teams will pass the puck to open teammates in hopes of setting them up for a shot with a clear lane to a goalie that is not set. If a team generates twenty shot attempts, but only five result in forcing the goalie to make a save, then either the shooters missed, they had to force hurried shots due to a poor pass, or the shot was blocked. Converting these shot attempts to actual shots on goal means that the shooters had more time due to a well-placed pass, there were fewer bodies in the way, or the goalie simply couldn’t get over to make the save in time.

The Devils-Sharks game on March 2nd is a good example of quality of quantity and the shortcomings of Corsi and Fenwick. The Devils finished that game at 55.4 CF% and 59.6 FF%. Both of those percentages are from Even-Strength play only. One would think they had a strong game, and they did, but they dominated in attempts. You don’t get goals for attempts. You don’t even get shots for all of your attempts.

The Difference Between Winning and Losing 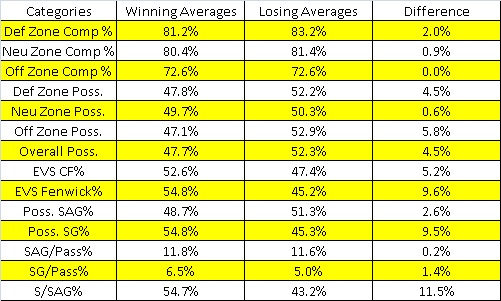 The winning team in all ten games has had an average S/SAG% of 54.7% and the losing team has averaged 43.2%. This 11.5% difference was the largest between the fourteen stat categories. The next two were a virtual tie as Even Strength Fenwick and SG/Pass% had a difference of 9.6% and 9.5% respectively.

A lot of this fascinating in that a the neutral zone completion percentage and possession share correlated more to winning than those stats in the other two zones, but the advantage the winning team has over the losing team in the neutral zone is less than 1% on average. So, is winning that fine a line? Or will we see the relationship between neutral zone play and winning percentage move in opposite directions with more data? Fascinating stuff.

Teams that had the puck less won more. The average possession percentage for a winning team was 47.7% and was less than 50% in each zone. I feel this will increase with more data, but could be wrong.

The SAG/Pass% and SG/Pass% were pretty close to each other, so the verdict is still out on those; as is the Poss. SAG%, with only a 2.6% difference between winning and losing averages.

Why This May Not Matter

I believe that with more games and more data, this stat will correlate strongly to winning. However, in full disclosure, these a few reasons why it might not.

It’s only ten games. Anything can look good in a small sample size. I’ll continue to do more (my goal is to track fifty games of the opposition by the end of the summer) and I believe I’ll be right, but this is still a very small sample size.

It’s just me tracking. Unfortunately, no one else tracks passing and shot-generation in the way I do. Now, I believe I’m staying true to the definitions I’ve laid out for everyone to see (see below), but the more eyes you can get on something and the more something has been peer-reviewed, the more valid the data is.

What do all of you think? I know this is a bold claim I’m making, but the data doesn’t lie. So far, S/SAG% is 10-0. I’ll check back in with you all once I have ten more games of the Devils opposition.

For newer readers, this is how I define the core data of what I work with.