This is a look at the zone exit and passing statistics for the New Jersey Devils for their 68th game of the season against the Tampa Bay Lightning on March 15th. Read on for the details.

The New Jersey Devils needed a win in Tampa Bay to salvage their road trip through Florida. They did not get it and now face an uphill climb to even get a sniff of the playoffs this year. Similar to the previous night’s effort against the Panthers, the Devils were again wasteful in their shot-generation. Only 44% of the shot attempts generated (SAG) resulted in actual shots on goal (SG). In a piece that will post tomorrow morning at 11:00AM, you’ll see why this is a bad sign. Let’s get to it.

Jaromir Jagr (11/14) created three shooting opportunities, but none of them reached the target. Patrik Elias was the busiest forward in the offensive zone for the Devils with fifteen of his twenty-one pass attempts coming from the Tampa end of the ice. He was able to generate three attempts and one shot.

Only Steve Bernier and Stephen Gionta failed to generate a shooting attempt. Jacob Josefson (6/7, 1 SAG) looked okay in his limited minutes. Now he’ll either get promoted to the top line or go back to the press box.

Defensemen: Marek Zidlicky had one of his best games of the season. He completed all twenty-one passes and generated two shots on three shot attempts. Ten of his passes were in the offensive zone and with the Devils needing to win at all costs from here on out, his play will be a key factor in whether or not they can do that.

Mark Fayne and Jon Merrill also got in on the action as each completed 5/6 in the offensive zone, generating one shot on two attempts each. Andy Greene was the busiest passer on the night (23/32, 1 SAG, 1 SG), but wasn’t his normal accurate self, which led to missed opportunities.

Bryce Salvador went 12/16 and didn’t attempt a pass in the offensive zone. On a night when the other five defensemen attempted thirty-two passes at Tampa’s end of the ice, that’s indicative of how ineffective the Captain really is. Even Anton Volchenkov was decent passing the puck (12/14). 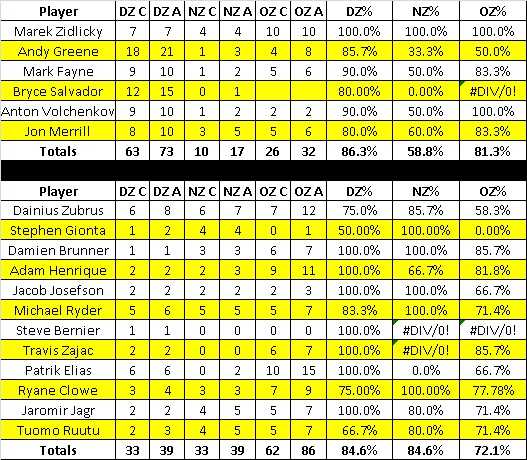 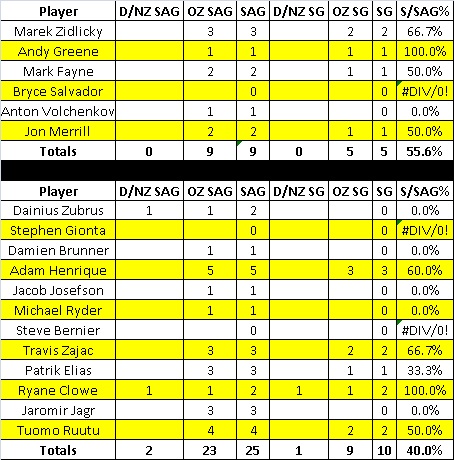 Forwards: Josefson finished at 60 PE%, again, he’s responsible with the puck. Gionta actually led the forwards with eight exit attempts and kept possession on four with one turnover. Normally reliable Dainius Zubrus (33%), Elias (40%), and Ruutu (40%) kept the Devils down a bit, but overall the forwards exited with possession 53.8% of the time—a slight bump over their season average. It was a good team effort in the zone exit department.

Defensemen: A solid night for the defensemen. Zidlicky went 4/4 on his exits, keeping possession on all of them. Greene, Volchenkov, and Merrill each were at 50 PE% or higher. Fayne only had two attempts, but neither maintained possession. Merrill (2) and Volchenkov (1) did have three turnovers between them. The worst offender was, you guessed it, Salvador as he finished with a 36.4 PE%. The group still produced a 54.3 PE% rate, which is a good 10% over their season average, but without Salvador’s “efforts,” that would have been a good deal higher. 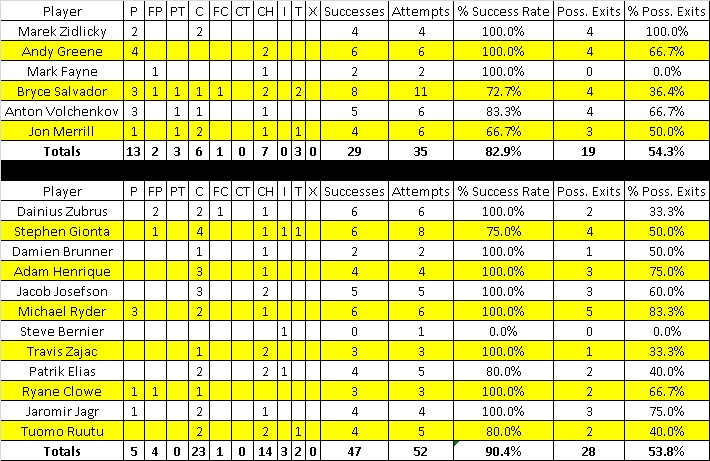