This is a look at the zone exit and passing statistics for the New Jersey Devils' 67th game against the Florida Panthers on March 14th.

For about thirty minutes, Devils fans could feel the team building off of a strong win in Philadelphia three days prior. Then, the bottom fell out. Terrible turnovers gifted a few goals to Florida, and a lackluster third period allowed the Panthers to steal two points the Devils at least deserve a share of. This won’t be a fun review. Let’s get to it.

Forwards: Wasteful. That’s the best way to sum it up. The forwards generated thirty shot attempts (SAG) via their passing, which is a phenomenal effort. Unfortunately, they only generated eleven shots (SG) via their passing, which is a decent total, but a very poor ratio (36.7 S/SAG%). Only Adam Henrique really had a standout game as each of his four SAG resulted in 4 SG. No one else generated multiple shots.

The Devils forwards had plenty of possession (over 100 pass attempts in the offensive zone), but just couldn’t make their shooting attempts count. Dainius Zubrus (3), Michael Ryder (2), Steve Bernier (3), Travis Zajac (4), Ryan Carter (3), Patrik Elias (2), Jaromir Jagr (4), and Tuomo Ruutu (2) all generated multiple shot attempts, and this list doesn’t even include Henrique. It was a good effort, but the quality wasn’t there.

Defensemen: You really can’t blame the defensemen for this one. They managed to generate ten shot attempts and saw half of them convert to actual shots on goal. That’s a solid output from the back end. Marek Zidlicky once again was solid as only three of his thirty four pass attempts were incomplete. He generated five shot attempts and two shots.

Jon Merrill was just as accurate (20/21) and added two SG on only two attempts. Bryce Salvador also continues to generate a shot attempt or two each game lately. This one saw him finish 14/17 passing and with two SAG and a single SG. Mark Fayne also joined in the SAG total with one of his own to go with his 14/17 passing effort. 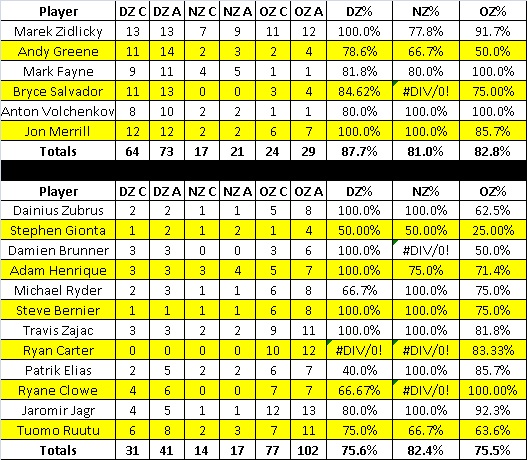 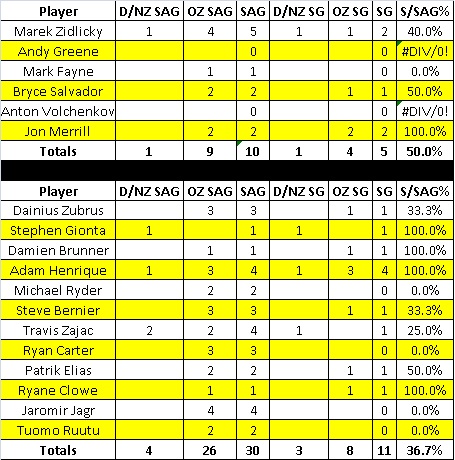 Forwards: We obviously remember Elias’ turnover that led to one of the goals, but Elias had a poor night regardless of that turnover (he had three in total). Zubrus (100%), Jagr (80%), Ruutu (55.6%), and Stephen Gionta (50%) are the only forwards that can be happy about their play exiting the zone. They helped stabilize the group’s PE% at 46.2%. Ryder, Bernier, and Carter went 0/6 in possession exits. Elias finished at 20 PE%. Ryane Clowe finished at 28.6 P%. Big swings among the forwards in this department.

Defensemen: A very good game for the Devils defense. They punched above their weight and finished around 10% higher than their season average with a 53.8 PE%. Andy Greene and Zidlicky accounted for almost half of the exit attempts and it was a boon for the team as both players were over 70 PE%. Merrill, Fayne, and Salvador were all under 40% and the Captain added three turnovers. Fayne added one we all remember. 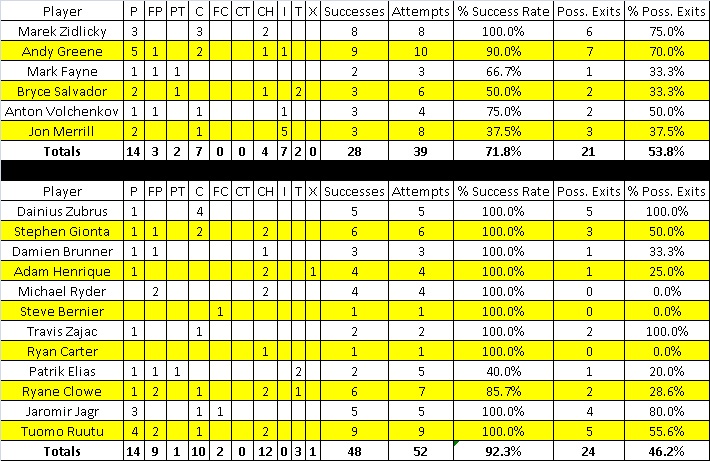