In a huge game against the Flyers on Tuesday night, Zidlicky and Jagr combined for a equally huge goal that ended up deciding it. Here we break it down to fully appreciate Zidlicky's excellent sequence.

The Devils played their biggest game of the season to date on Tuesday and they were able to escape with a victory thanks, in part, to a third period goal from Jaromir Jagr. This goal really was the Marek Zidlicky show, though, as he came through with a series of great plays to make this goal happen. Zidlicky's tenure with the Devils has been up and down, and few players can frustrate fans the way that he does, but when he is on his game, there aren't a lot of guys more deadly on offense from the blue line. Both Good Zidlicky and Bad Zidlicky have made numerous appearances this season but, big picture, it's hard to argue that he's been anything but positive for the Devils overall. And I say that, knowing for a fact that I've wanted to set him adrift on an ice floe more than once this season.

This play was a shining example of Good Zidlicky and it was amazing to watch. He is able to victimize each of the Flyers skaters in some way on this play. Jagr, of course, had a hand in the play too (he did score the goal), but Zidlicky was the main driver and, quite frankly, praising Jagr for being awesome is kind of old hat at this point. Anyway, have a look for yourself:

So let's set things up here. The five players on the ice for New Jersey were Zidlicky, Jagr, Tuomo Ruutu, Travis Zajac, and Bryce Salvador (Interestingly enough, this would be the only shift the entire night that Zidlicky and Salvador would take together). For the Flyers, they had Wayne Simmonds, Brayden Schenn, Vincent Lecavalier, Mark Streit, and Braydon Coburn. Steve Mason was in net, thankfully.

Where we lead into the play, the Devils had already had the Flyers pinned in the zone for close to 20 seconds (they were in the offensive zone for 37 seconds by the time the goal was scored). Zajac initially carried it in and worked it along the boards and Jagr did Jagr things (chief among them, create space with his butt) and put a wrap-around attempt wide. He then chased down his own rebound past a handful of Flyers, putting us here where we begin. 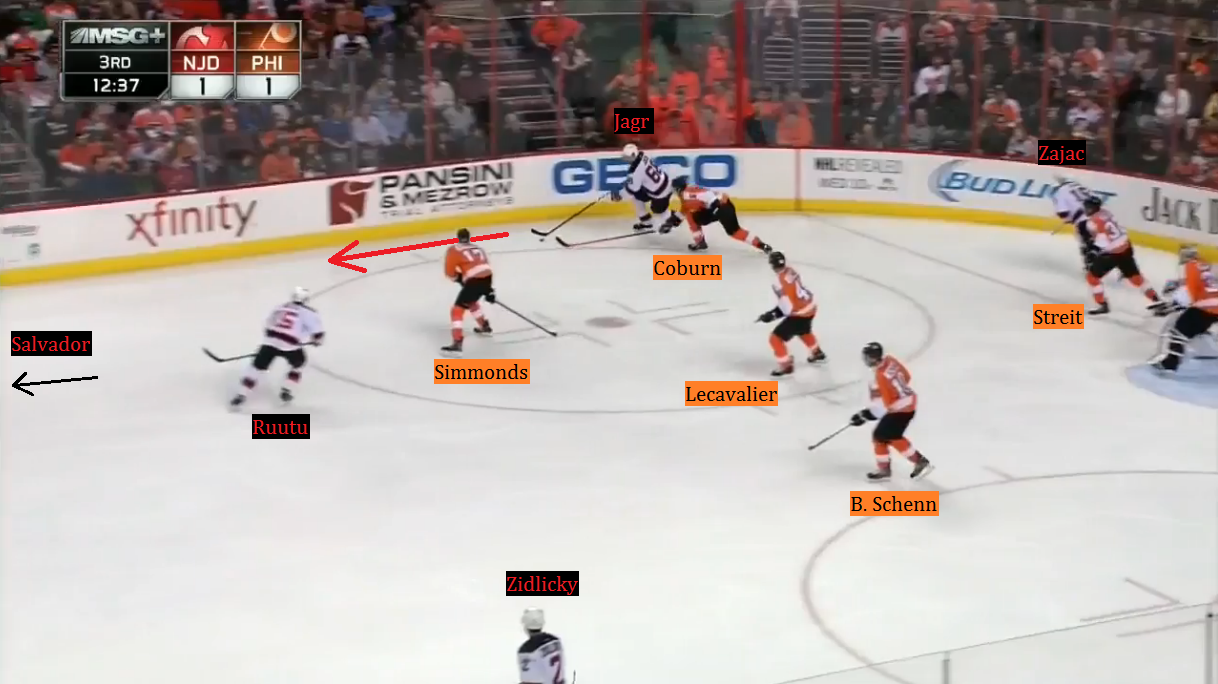 After collecting his rebound left of the net, Jagr turned and headed up the boards with Coburn giving him chase. You can see Simmonds drifting in to cut off the play before Jagr gets to the point. Zidlicky lurks at the right point and Ruutu starts making his way for the net. 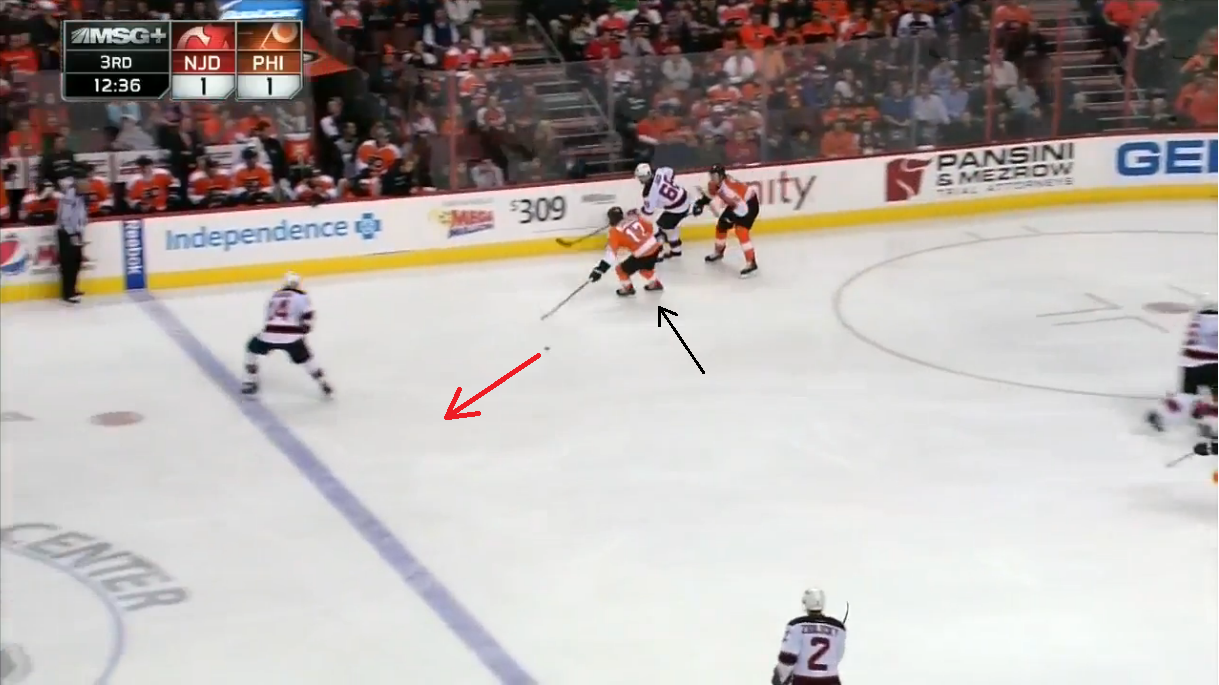 Coburn and Simmonds converge on Jagr, but he is able to get the pass away to Bryce Salvador. Salvador has a lot of room out there with Jagr drawing Simmonds, so he'll have time to make a play. 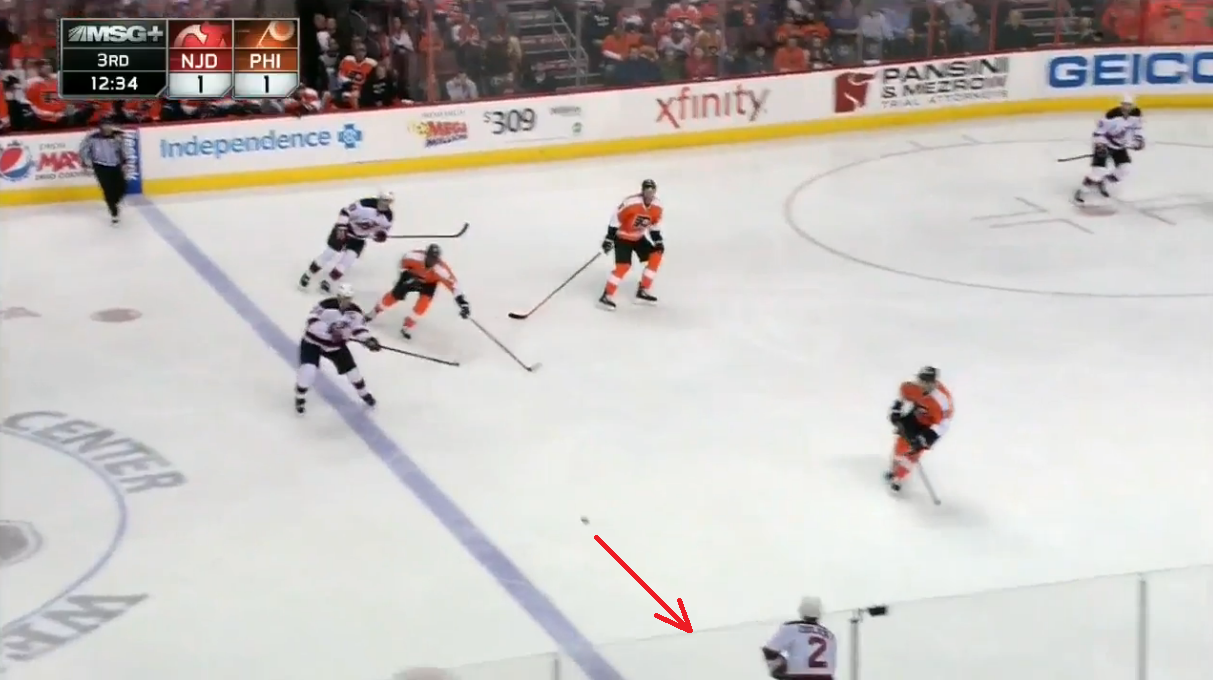 Salvador keeps the puck going with a crisp pass across the blue line to Zids at the right point. You know Salvador his having one of his best nights when he plays a role (albeit a minor one) in both goals. Any time he can keep the play moving in the offensive zone and stay out of the way otherwise, you count it as a win. Nice job, Sal. 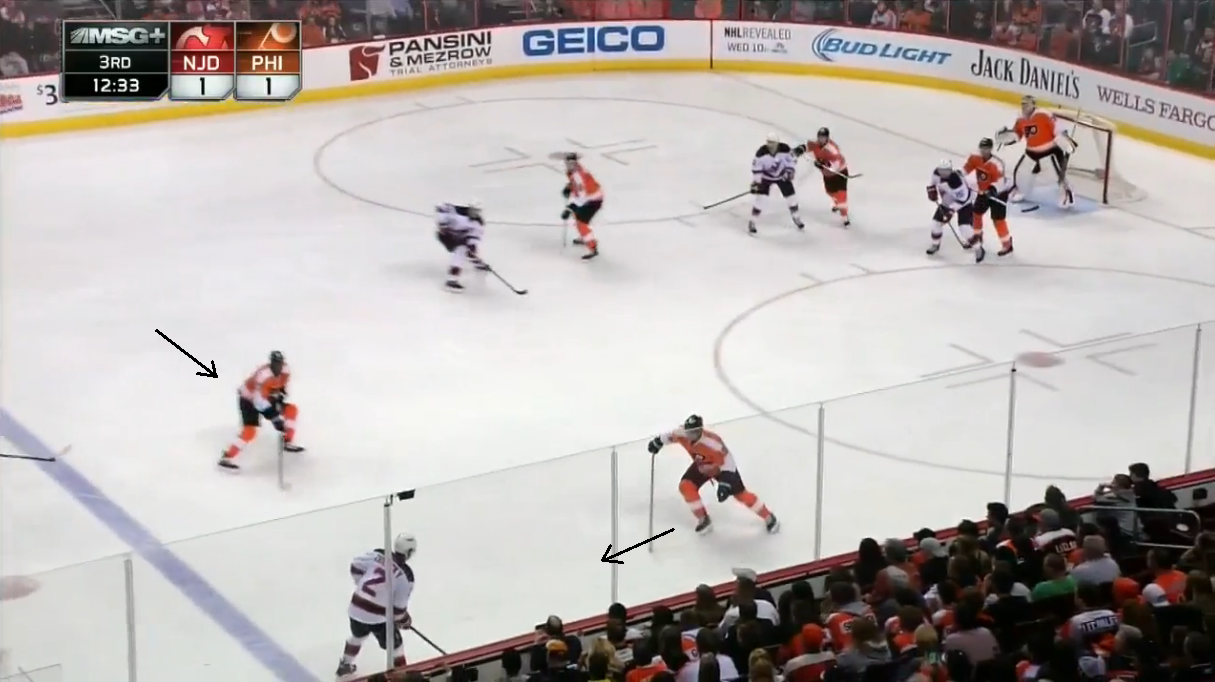 So Zidlicky has the puck and a little time to make a decision. He holds for a bit to draw in the Flyers and wait for something to develop. Meanwhile, Jagr is cutting across the middle of the ice to get back to the right side. Schenn decides to force Zidlicky's had by pushing up on the point and it's not gonna work out great for him. 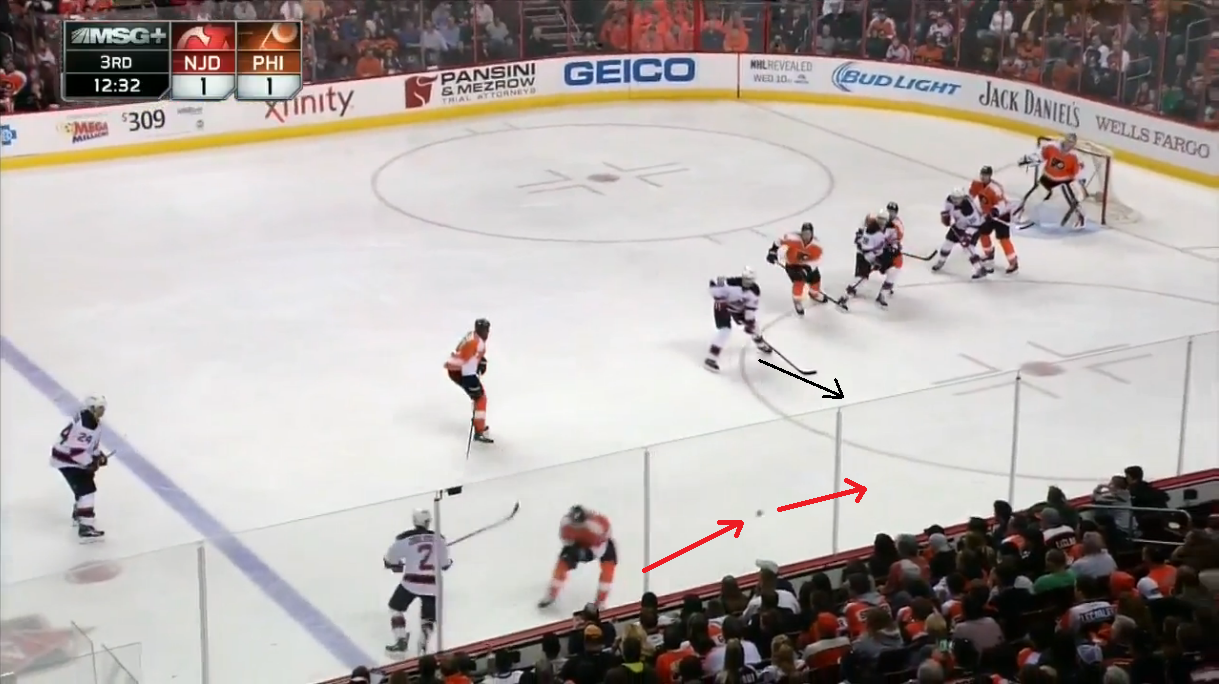 Zidlicky makes his move. He saucers a nice pass for the cutting Jagr over Schenn's stick and then takes off toward the middle. It's not something you see a ton of from a defenseman, but Zidlicky is often willing to go down low in situations beyond the normal pinch (sometimes to his detriment). His first step here is basically going to beat Schenn and Simmonds at the same time. 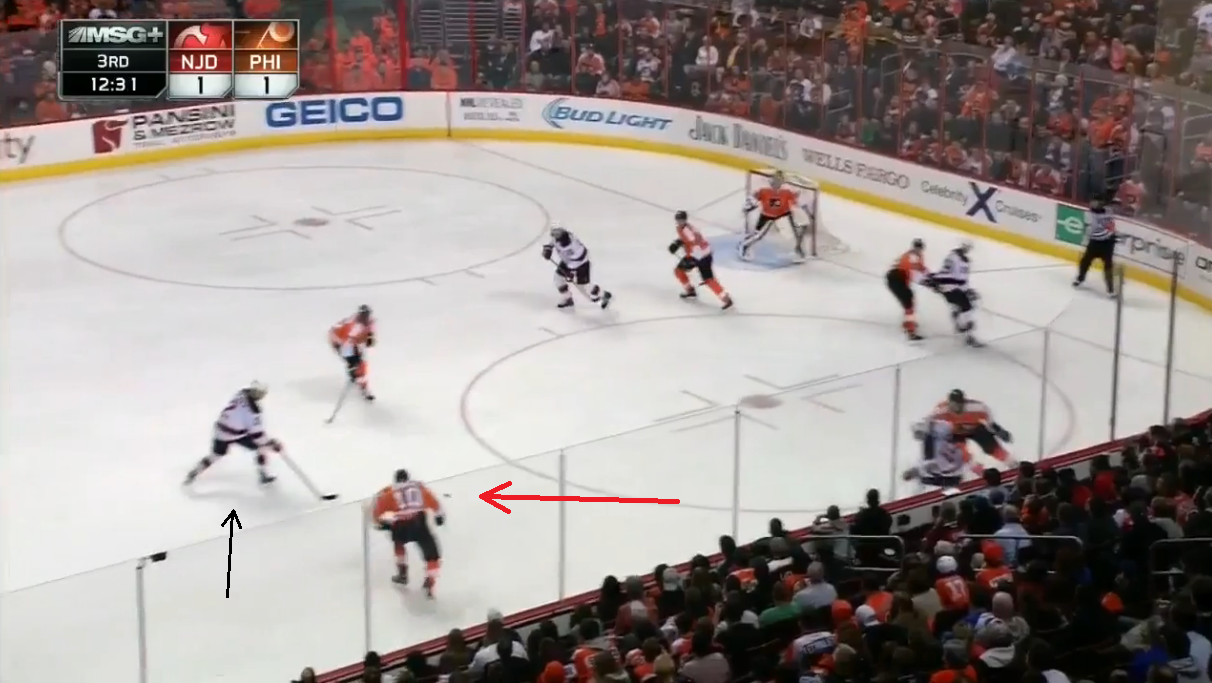 Jagr is Jagr, so he immediately recognizes what Zidlicky is up to and returns a pass to Zids with Coburn bearing down on him. The pass splits Schenn and Simmonds but it's a bit off the mark behind Zidlicky. Zidlicky makes a terrific play to corral the puck by deflecting it between his own legs, though, and he barely breaks stride. 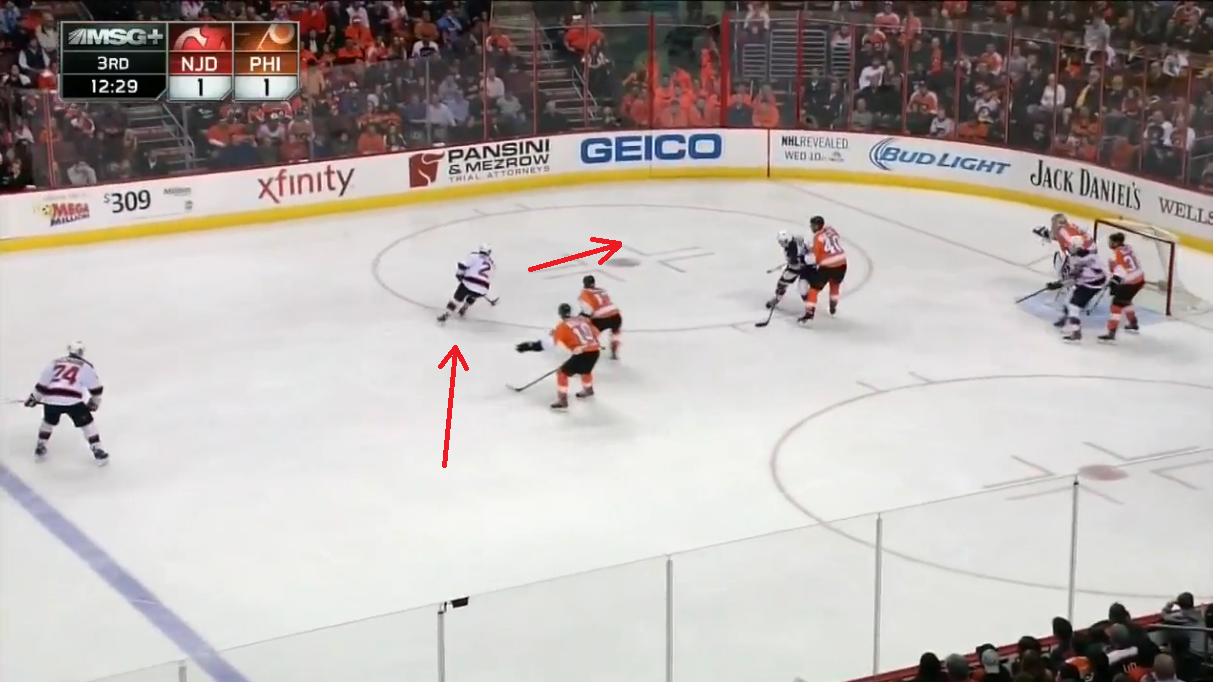 Since the play he made on the pass allowed him to maintain his speed, Zidlicky blows by Simmonds with relative ease. You can see Schenn motioning the switch to Simmonds, saying that he has Salvador. Yup. Thanks, Brayden. Meanwhile, you can see Ruutu locked up on Lecavalier down below. 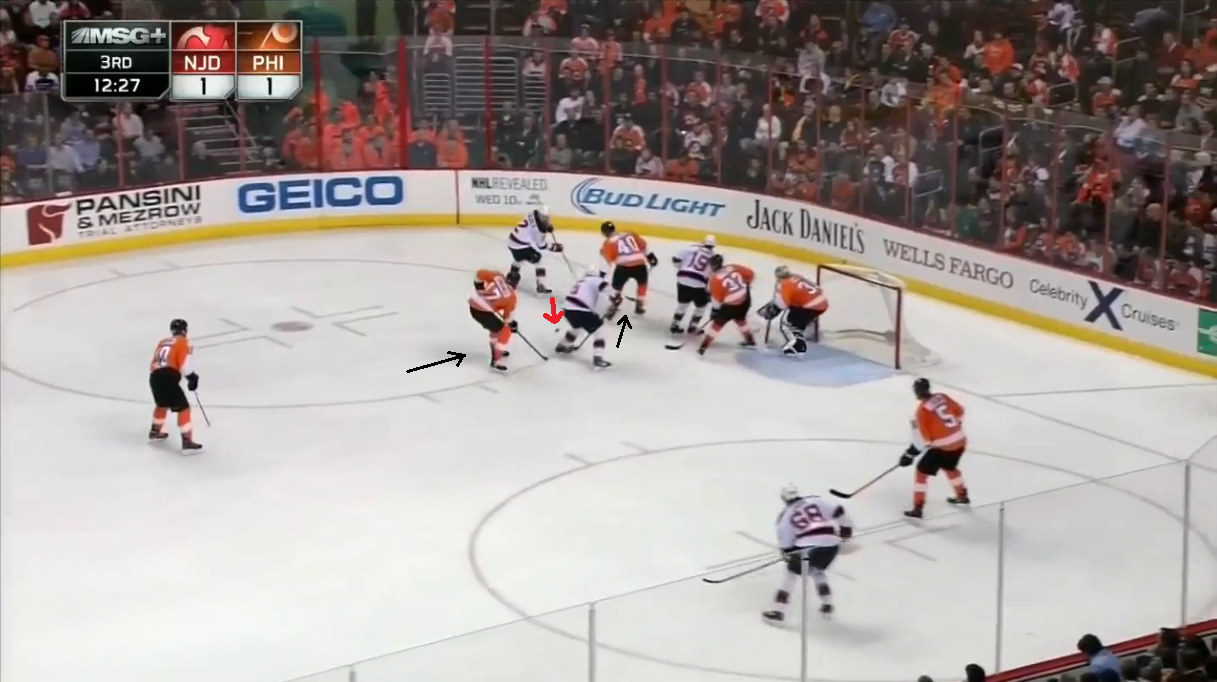 Zidlicky gives the look that he is driving down below the net. Lecavalier steps away from Ruutu to engage him, but Zidlicky immediately makes the backhanded pass to Ruutu once Lecavalier gives him the space. It's a quick decision and a pretty pass to put the puck on Ruutu's stick right in front of the crease. Ruutu won't have much time as you can see Simmonds bearing down on him. 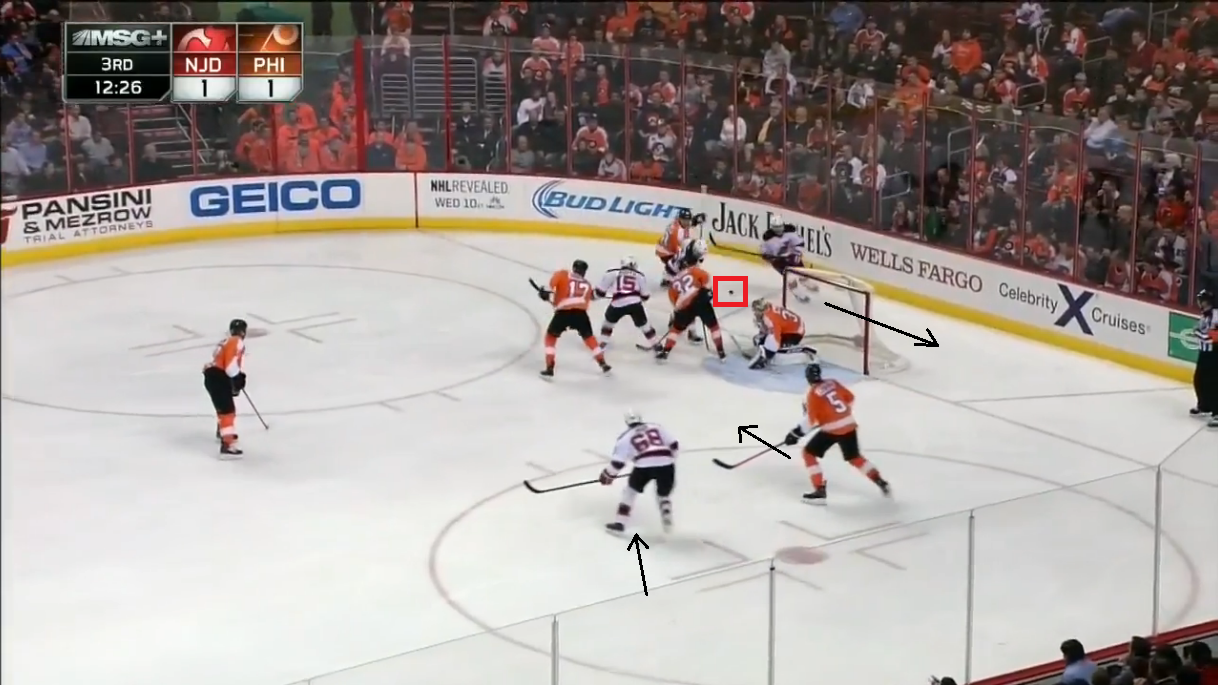 Ruutu gets his stick on Zidlicky's feed, but he doesn't get good wood on it. Hard to say, but Simmonds might have gotten a stick on it or at least disrupted Ruutu's timing a bit. Either way, the puck gets chipped toward Mason and very nearly finds its way over him. Mason is able to shrug the shot off, though. The scramble has caused the Flyers to all collapse toward the net and you can see Jagr creeping in on the right side now too. Zids continues behind the net, as he is wont to do. 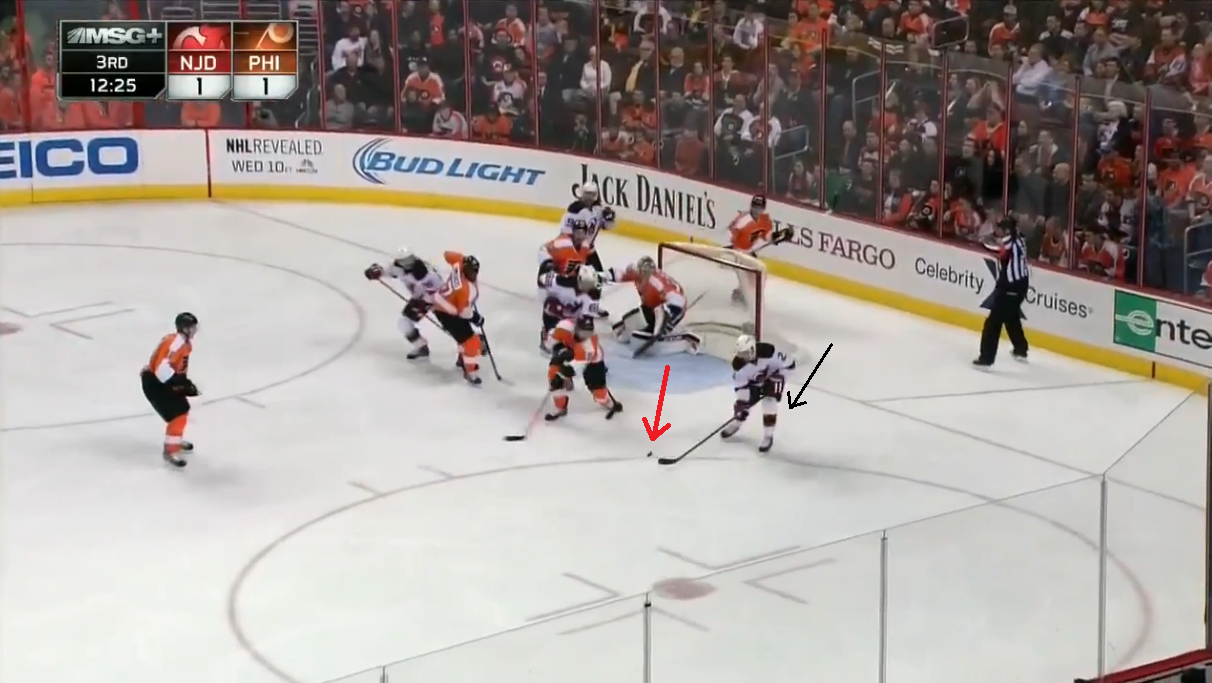 The Devils get a little break here as Coburn overskates the rebound while heading toward the middle and is unable to corral it. This allows Zidlicky to take the puck in the right circle with plenty of space to work with. Notice that Jagr has now stationed himself at the front of the crease. 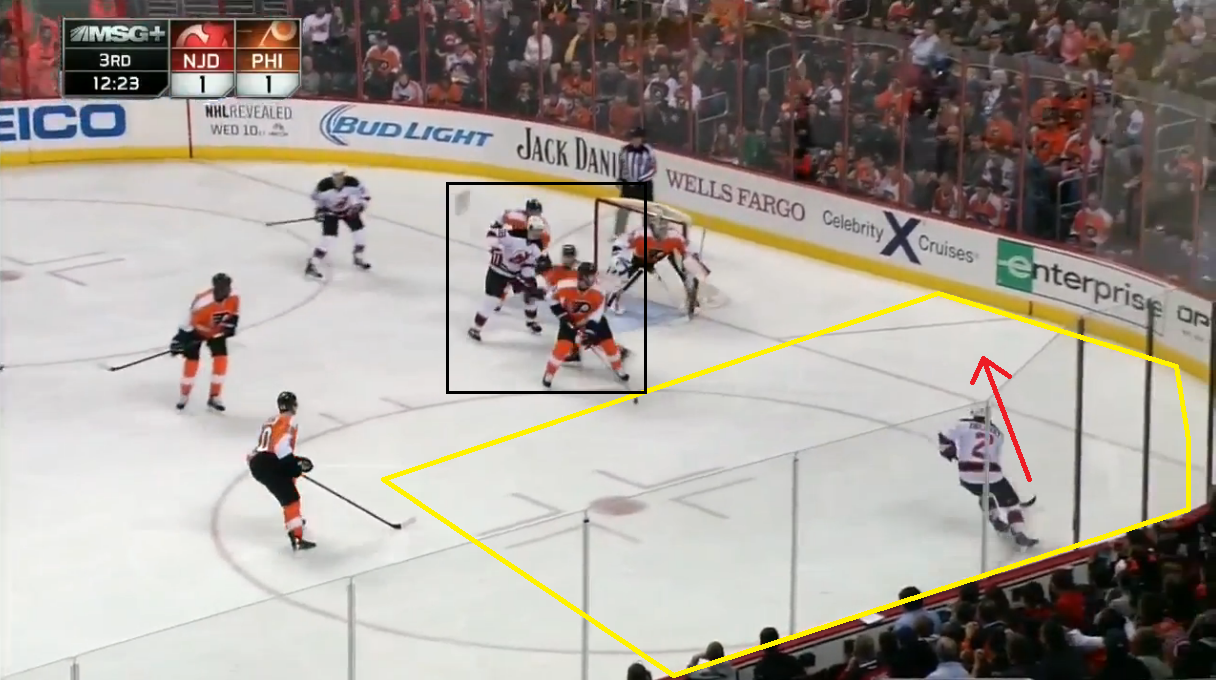 The Flyers collapsing into the crease freed up an enormous amount of space to work with for Zidlicky. There are basically 3 guys on Jagr at this moment (though perhaps that is justifiable when we're talking about Double-J). Zids uses that space to circle around and head back toward his favorite area below the goal line. 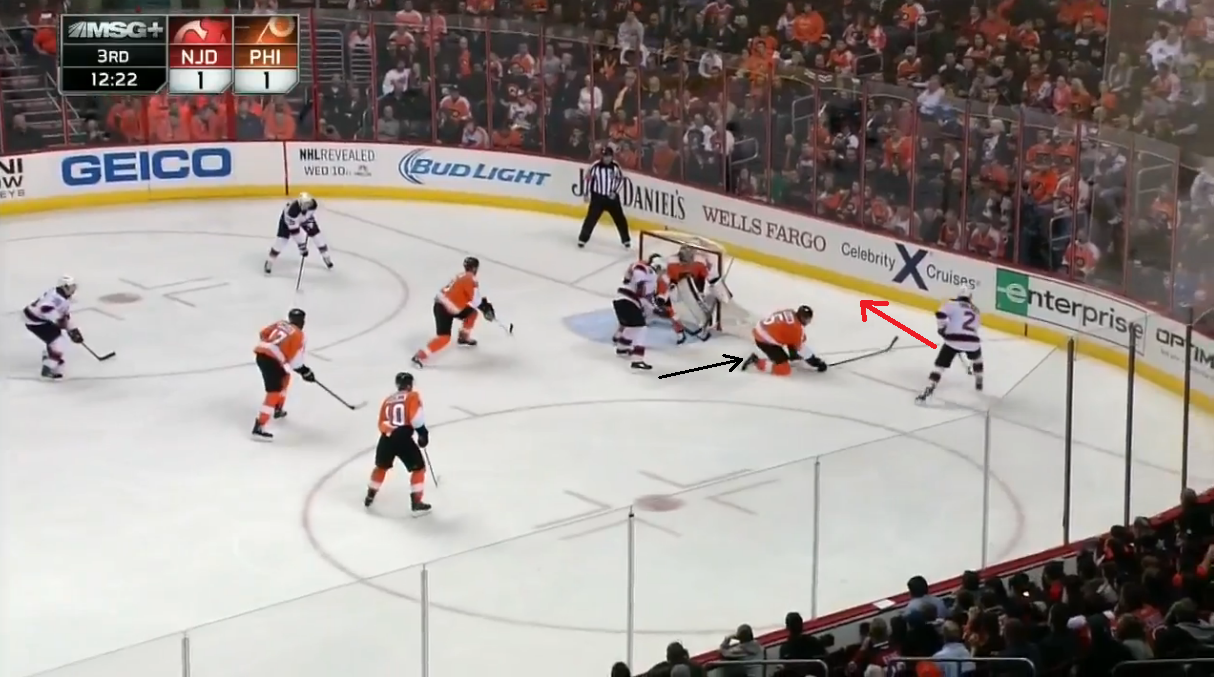 As Zidlicky heads down towards the back of the net, Coburn drifts down to cut off any possible passing lanes for him. He actually does a pretty good job of it as Marek seems to have nowhere to go with the puck. With the lane for his centering pass cut off, Zids appears to be forced behind the net with this play, but he has a trick up his sleeve. 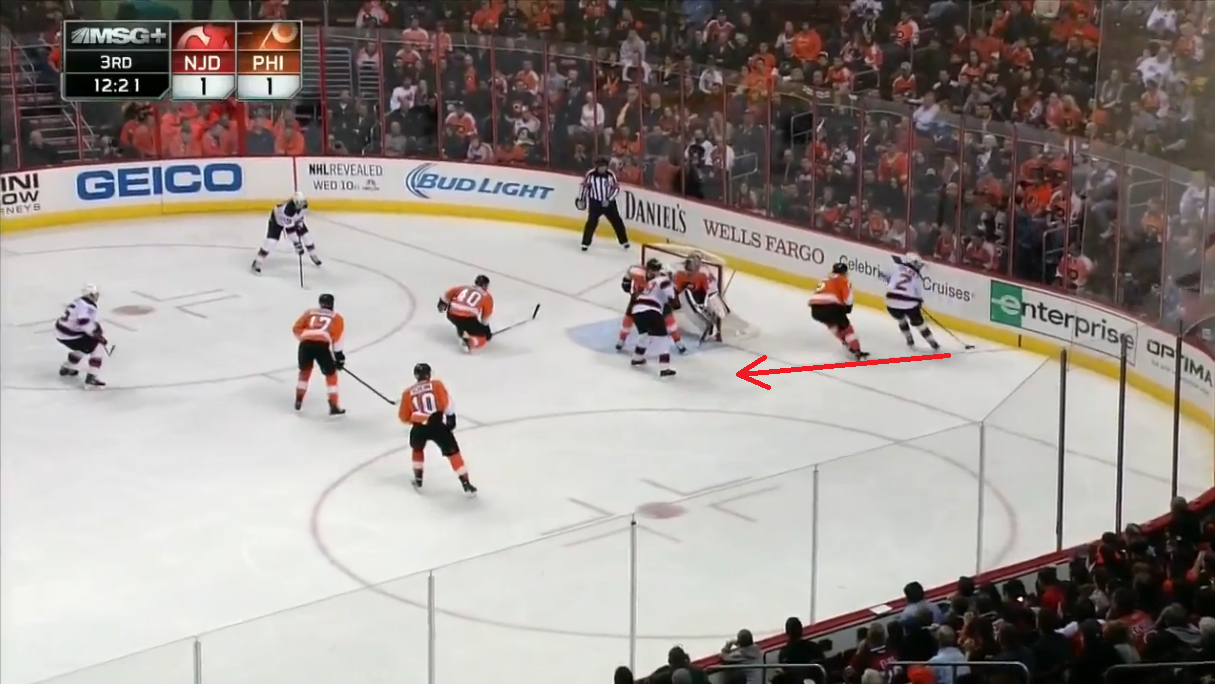 Coburn made a good play, but Zidlicky just made a better one. Pretty difficult to anticipate the behind the back, no-look pass right there. Safe to say that Zidlickymania is running wild at this point in the play. Meanwhile, Jagr has been battling for position with Mark Streit out in front, and Streit seemed to have him tied up pretty well. Zidlicky was able to put the pass on Jagr's backhand, though, allowing Jagr to use his body to create space. 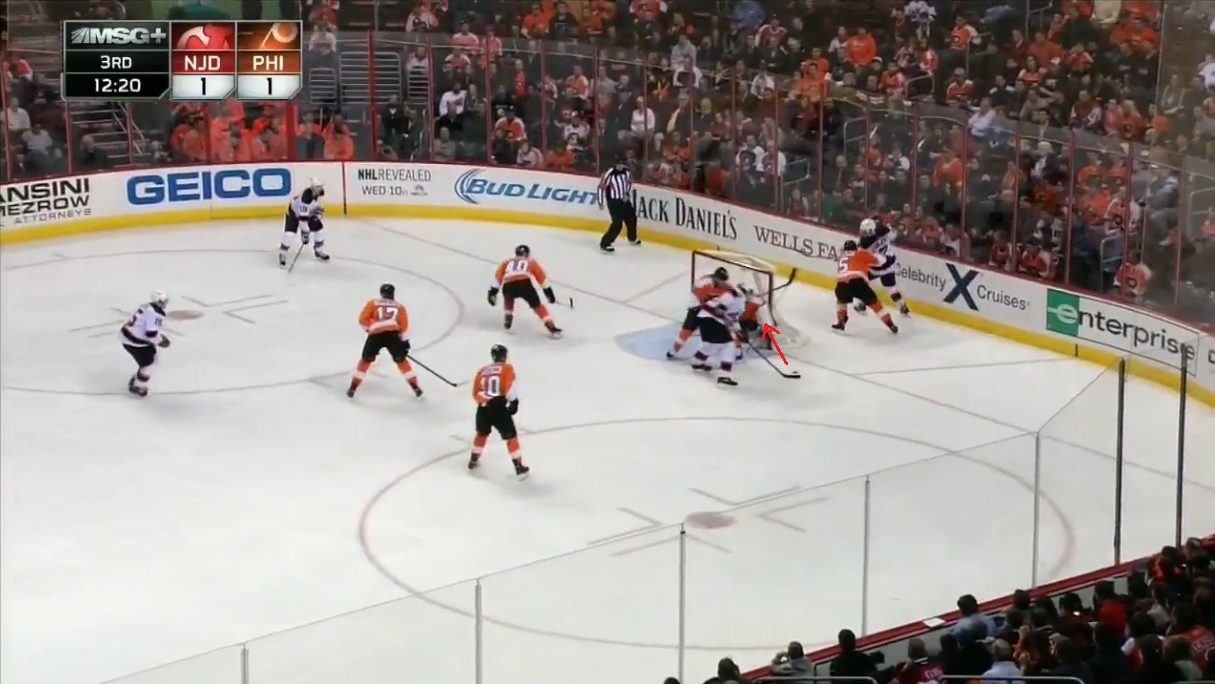 Jagr gets the shot away and it seems like Mason is in position to make the save. But whether he was surprised by it or just remembered that he is Steve Mason, the puck found its way past the Ol' Seive and into the back of the net. Just a great play (really, 3 or 4 plays) by Zidlicky and Jagr puts it home like he does. Devils take the lead and hold on for a big win in the end. 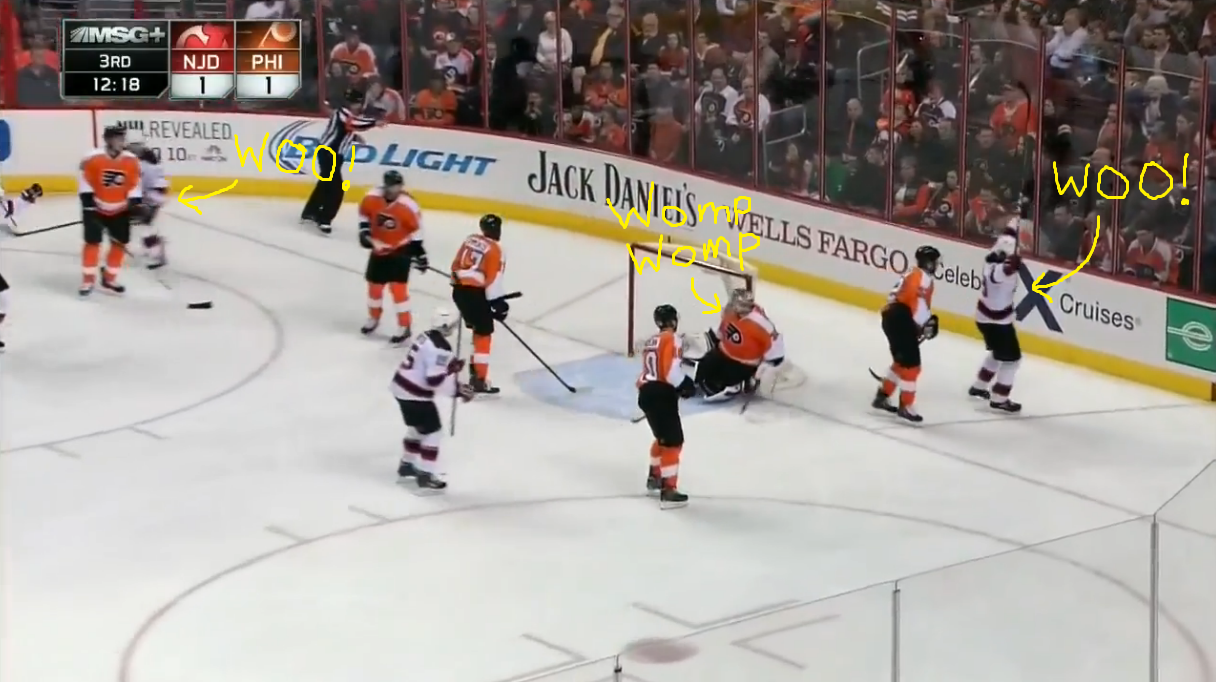 Fell free to watch it one more time, only on the Devils' feed instead of the Flyers. Bonus points to Cangi for using the phrase "Neat move by Zidlicky" without any hint of irony.