This is a look at the zone exit and passing statistics for the New Jersey Devils' 59th game of the season against the Washington Capitals. Read on for the details.

More of the same. Posts and missed shots cost the Devils against Washington as the 3-0 score line was flattered by two late empty-net goals. Production was varied amongst the skaters, though the team did get plenty of support from the blue line and once again had more attempts at the offensive end of the ice than their own. Let’s get to it.

Forwards: Dainius Zubrus was quiet until later on, finishing 7/10 with 4 SAG. Stephen Gionta went 4/4 in the offensive zone (no passes elsewhere) and 1 SAAG and 1 SG. Surprisingly, only Andrei Loktionov (8/10) failed to generate a shot attempt. If he wants to stay in the lineup, I’m sure he has to more next game—if there is a next game for him.

Apart from Elias, only Ryan Carter (7/7) generated multiple shots (2) and had an efficient game. Overall, the team generated shots on only 40% of their SAG totals. Poor, but consistent with John’s narrative in his recap.

Defensemen: With 10 SAG and 2 SG, the defensemen certainly were no slouches in the offensive zone last night. They completed 21/25 passes, with only—you guess it—Bryce Salvador failing to attempt a pass at the Washington end of the ice. Andy Greene was very busy, going 22/24 with 4 SAG, but no SG. Peter Harrold was effective at both ends of the ice, completing all 9 of his passes in his own end and in the offensive zone—where he generated 2 attempts and 1 shot—but he was 1/4 in the neutral zone. Overall, a decent performance, but could have been sharper at center ice.

Salvador went 9/12 in another ineffective performance. When was the last time the Captain actually made an impact? 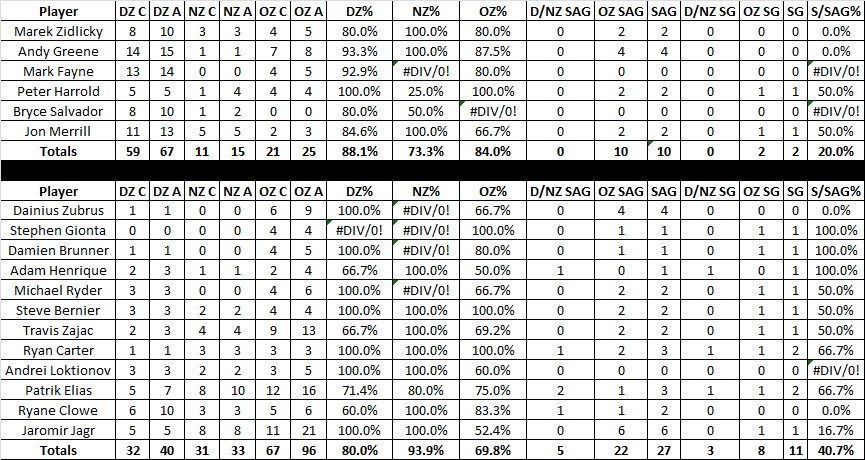 Forwards:Ryane Clowe once again led the group with 8 attempts, but only 3 were with possession. Adam Henrique and Carter were the only other forwards under 50% as most were solid. Henrique had the group’s sole turnover.

Defensemen: Another poor night exiting the zone resulted in a 34.2 PE% for the defensemen. Salvador had 3 more turnovers and needs to hang up the skates for a “Special Assignment” job with the Devils. Marek Zidlicky had 2 turnovers as well, finishing with 2 possession exits of his 6 attempts. Greene led the group with 11 attempts, with 5 maintaining possession. Jon Merrill did not have a good night as only 2 of his 7 attempts were with possession. 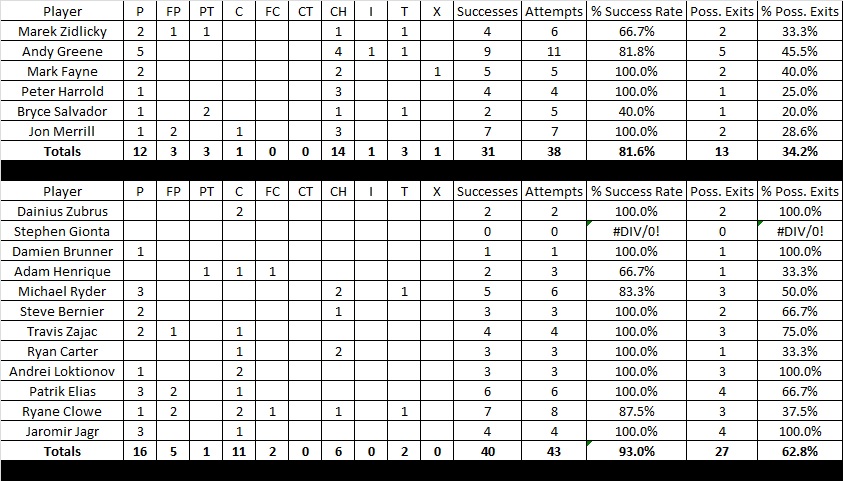