Looking Ahead to March, the Most Crucial Month for the New Jersey Devils

Regardless of tonight's game, the New Jersey Devils absolutely need to have a good month of results in March to be in the playoff picture. In looking ahead, it's clear that it's a favorable schedule by the possession stats of their opponents.

Share All sharing options for: Looking Ahead to March, the Most Crucial Month for the New Jersey Devils

Way back in the end of September, we had our multi-part season preview conclude with a summary and predictions.  Matt rounded it all up and this is what I wrote in my prediction.

I'd like to think that they can but even so, I would expect a lot of close games this season. I think the Devils have the quality to make the playoffs and I hope they'll get some more breaks. They'll have to battle throughout the season with Philadelphia, Washington, and the Islanders in the Metropolitan Division for positioning. I think they'll finish a tight race in fourth and grab a playoff spot. But they could be on a knife's edge to get there. They might get higher but plenty could cause them to do worse.

Well, they're not battling the Islanders, but they are battling just about everyone but them and Pittsburgh for a playoff spot in the Metropolitan.  The New Jersey Devils are defnitely riding a knife's edge, slipping in and out of contention seemingly by the day.  They need help but they can help themselves out better than anyone else. They aren't nearly far out of it, but it seems so far due to month after month of mediocre records.  The good news is that a strong March could make the difference. The bad news is that the Devils will need to succeed - and fast.

Tonight, the Devils will visit the Capitals and then be off until the very end of February with a game against Columbus.  What follows are fifteen games.  Nine at the Rock and six on the road.  Four back-to-backs with the start of a fifth on March 31 followed by an April's Fool night meeting against Buffalo.  Five of those games in March are within the Metropolitan and another three could impact the wild-card directly.   Even if the Devils win tonight, we will find out in the following 17 games whether the Devils can finally break out and grab a playoff spot or whether they will wither to missing the playoffs by the end of the season like in the lockout-shortened 2013.

To that end, I think it makes sense to look ahead and see how strong their opponents really are.  One of the reasons why sites like Puck Prediction still think well of the Devils' chances of making the post season is because the Devils are a strong possession team.  After going through multiple possessions stats at Extra Skater, the Devils will play more inferior possession teams throughout March.  To show that, I've made the following chart. I've included close-score 5-on-5 Fenwick%, score-adjusted Fenwick at 5-on-5, and both road and home 5-on-5 Fenwick%.   I've also added the games against Columbus that closes out February and the Buffalo game that kicks off April.   Given their proximity to March, I believe those games are part of the crucial schedule the Devils must succeed in.  Teams in bold are within the Metropolitan.  Lastly, all numbers were taken prior to today's games. 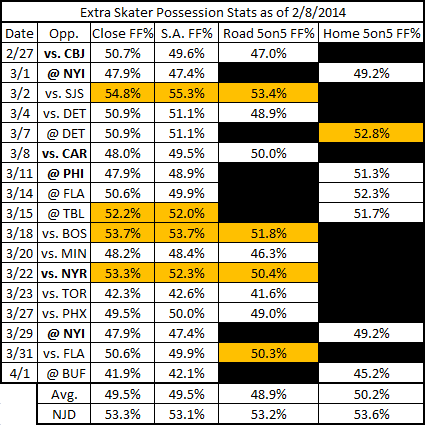 Those values marked in yellow-orange are top-ten values.  The Devils only play four top-ten possession teams in this run:  San Jose, Boston, Our Hated Rivals, and Tampa Bay.  Fortunately for the Devils, three of those games are at the Rock, where the Devils have been usually quite good in terms of possession.  More important than that, the Devils get to play a lot of weaker possession teams that more than offsets those four games.  They have eight games against teams that are straight up less than or equal to 50% in either close-score and score-adjusted Fenwick.  That is, eight opponents who usually get out-attempted.  Columbus, Florida, and Detroit are above 50% in close-score Fenwick but only Detroit does better after adjustments; it makes the Blue Jackets and Panthers be around the breakeven point.   Overall, the Devils should be able to enjoy the puck more often in their coming games, which would be a big help along the way.

Of course, it's not all easy as that.  Home Fenwick percentages are usually high and Detroit's in the top-ten.  Philly, Florida, and Tampa Bay aren't too far from it but are still quite positive.  Florida has been sneakily effective on the road, too.  More importantly, possession is important but as we saw last season, it isn't everything.  It'll still fall on the Devils to take plenty of shots and do what they can to score plenty of goals.  The team has made the right call making Cory Schneider the man, as evidenced by starting six in a row heading into the break and starting the vast majority of games so far in calendar year 2014.  But even a vastly superior save percentage isn't going to get many results if there aren't enough goals to support Schneider.  Or Brodeur since there's no way Schneider is going to play all of the games in a crammed month.

The team badly needs some additional help on offense.  All other options within the team appear to be exhausted without much success.  The trade deadline is March 5, 2014 at 3 PM EST.  The Devils will have four more games after tonight to draw any final conclusions or make any last minute showcases.  I hope Lou does find and make a deal for offensive talent.  They very well could use it.  They could have used it for months now.  Time is running out and it only adds to importance of this coming month.

In the big picture, the Devils appear to have a favorable schedule ahead.  They still need to approach these games with the importance that they deserve and execute an appropriate gameplan.  Stupid efforts like last night's against Edmonton or just poor ones in general will be costly regardless of how good or bad the opponent is at evens.  On any given night, even a poor possession team can put out a great performance - like Colorado did back when the Devils visited Denver in mid-January. Buffalo, the Isles, Minnesota, Philly, and Toronto are all bad possession teams but the Devils still need to take care of business in other areas.  Still, there's reason to have a bit of hope that the team can break through.   Plenty of home games, plenty of opponents who aren't good at something the Devils are really good at, and plenty of motivation to make the postseason.  March may effectively begin on February 27 and end on April 1 for the Devils, but it will be crucial all the same.