This is a look at the zone exit and passing statistics for the New Jersey Devils' 58th game of the season against the Edmonton Oilers. Read on for the details.

The Devils came out strong against the Oilers, as nearly half of their 1st period passing occurred at the Edmonton end of the ice. The teams traded goals and play evened out of as the game went into OT. Jon Merrill secured the bonus point for the Devils as they need all the points they can get right now. Let’s get to it.

Forwards: Adam Henrique owned the 1st period. He went 8/9 and generated 4 shot attempts and all 4 resulted in shots on net. Overall, he went 15/20 with 7 SAG and 5 SG. He was simply a beast. Travis Zajac and Ryane Clowe were the only ones that could claim to have a solid night in comparison. Zajac went 13/19 with 5 SAG and 4 SG; Clowe went 20/23 with 5 SAG and 3 SG. Great nights from them.

1st/4th line center Andrei Loktionov went 12/14 and generated 2 shot attempts and 1 shot. He impacts play much more than Stephen Gionta and should never be benched while Gionta is in the lineup. There, I said it again. Deal with it. Gionta went 7/8 and didn’t attempt a pass in the offensive zone.

Michael Ryder had an up-and-down game as he continually threw the puck across the zone only to turn it over. He made up for it with his cross-ice pass to Merrill for the game-winner. He finished 14/20 with 2 SAG and 2 SG. Jaromir Jagr wasn’t great in terms of offense generated as he went 15/24 with 2 SAG. Patrik Elias was also off a bit: 9/16 with 1 SAG.

Damien Brunner was quiet for much of the game but had a strong series late in the game where he generated 2 shots on 4/5 passing. Ryan Carter went 6/7. Steve Bernier was a ghost with 1 pass in the neutral zone.

Defensemen: Merrill not only had the winning goal, but he had a damn solid game passing the puck as well. He was the busiest defenseman on the night, going 27/29 and generating 2 shots. Nearly 80% of his passes occurred in the defensive zone, but he completed all 6 passes he attempted in the neutral and offensive zones. Mark Fayne also had a decent game, going 22/24, generating 2 shot attempts and 1 shot, but he was far more active in the neutral and offensive zones than Merrill was. Good games from both though.

Bryce Salvador generated 2 shot attempts and 1 shot (Loktionov’s goal), and went 14/18 overall. Marek Zidlicky was off (9/15, 1 SAG, 1 SG) as my best memories of him were skating in a circle with plenty to shoot, and then failing to clear the zone with 30 seconds left in the game. Nice Zid.

Andy Greene was unspectacular with nothing generated and 14/17 passing. Peter Harrold got forward again and finished 16/19 with 1 SAG. 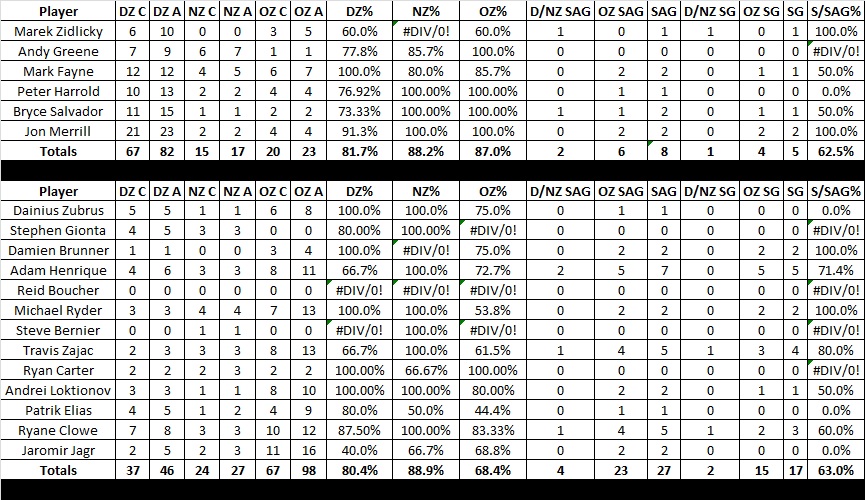 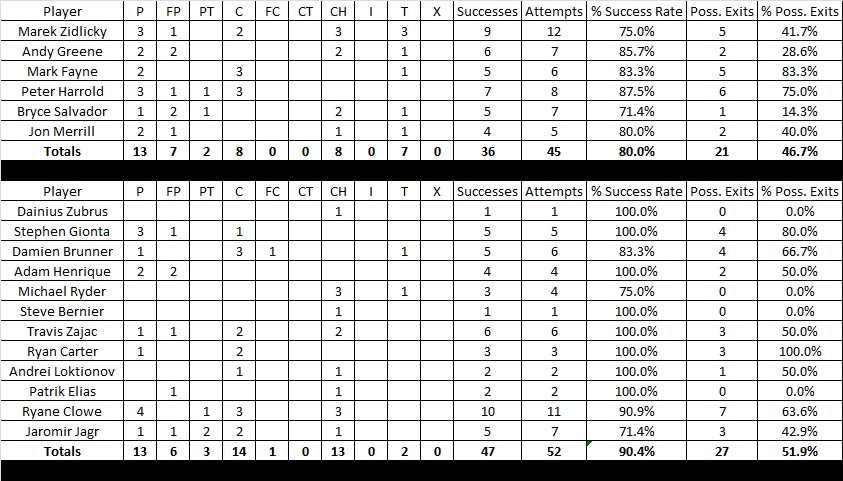