This is a look at the zone exit and passing statistics for the New Jersey Devils 57th game of the season agains the Colorado Avalanche. Read on for the details.

The Avalanche came to town looking for 2 points and that’s what they left with, despite Cory Schneider’s best efforts. Ryan Carter opened the scoring and a well-passed play from the 4th line. It evened out for them as two-thirds of the 4th line was on the ice when the Avs equalized late in regulation. It shouldn’t have come to that as Dainius Zubrus and Jaromir Jagr each had quality chances to extend the lead.

I don’t want to sing the familiar refrain, but I have to for at least a moment. The Devils deserved far better than they ending up getting against the Avs. For most of the game, the Devils were generating not just shot attempts, but actual shots from their passing, at a much more efficient rate than they have on the season. Furthermore, 45% of the Devils pass attempts occurred in the offensive zone, whereas only 40% occurred in their defensive zone; that is the first time since I started looking at passes by zone that the offensive zone attempts have exceeded the defensive zone attempts. The 45% is 7% more than their season average, so they spent significant time at the Colorado end of the ice. Let’s get to it.

Forwards: Through the first 2 periods, the percentage of shots to shot attempts generated was quite high: it hovered around 60 – 65%, which is significantly higher than their season average. By the end of the game, it regressed to 46.4%, which is still higher than their average, but not by much. Suffice to say, they weren’t getting as many shots from their passing later on in the game as they were earlier.

The problem was that most of the production came from the same players: Travis Zajac (4 SAG, 4 SG), Andrei Loktionov (3 SAG, 2 SG), Steve Bernier (3 SAG, 2 SG), and Patrik Elias (5 SAG, 4 SG) were the team’s main shot generators against the Avs. Everyone except for Damien Brunner generated a shot attempt, so it was a consistent and communal effort. The group attempted 90 passes in the offensive zone, but only Zubrus (9/12), Zajac (9/12), and Jagr (10/15) had more than 8 pass attempts. Most skaters had between 6 and 8, which shows that all lines got involved.

Michael Ryder was perhaps the only one that really didn’t contribute as much as 8 of his 11 passes were in the defensive zone and he only generated 1 shot attempt.

Defensemen: The defensemen attempted 100 passes on the night, neatly broken down with 62 in their end, 19 in the neutral zone, and 19 at Colorado’s end of the ice. However, if there was ever a snapshot of much the Captain offers going forwards it’s the below chart: each of the other five defensemen attempted at least 6 passes in the neutral and offensive zones combined. Whether or not you want to debate if Salvador is the “worst” defenseman on the team, I offer my own take on that question. The goal of Hockey is to score goals. To do that one needs to advance the puck towards the opposition’s end of the ice. Generally, this is done by passing to teammates. Pass, shoot, and score, as the Coneheads said (Winter Olympic Plug). Logically, then, it is fair to say that Salvador contributed the least among defensemen towards their goal of scoring. He went 6/11 in his own end and failed to attempt a pass elsewhere on the ice. ‘Nuff said.

Peter Harrold, my my. He went 17/19 overall and generated 2 attempts and 2 shots. I think he’s the anti Volchenkov in that he will get involved, but you don’t necessarily want him having to defend at any point in time. If one could combine the two, you might get someone to actually stay in the lineup. I’m not going to get my hopes up on Harrold, but, passing-wise, he played a solid game.

Jon Merrill was the only other defenseman to generated a shot, as he went 17/20 overall. He and Harrold were on the ice for the tying goal, so that’s a downer, but both were okay on the passing chart. Overall, it was another low-event night with regards to shot generation with only 5 attempts and 3 shots generated via the passing from the blue line; however, the breakdown of their passing by zone shows they were strong territorially, Salvador aside. 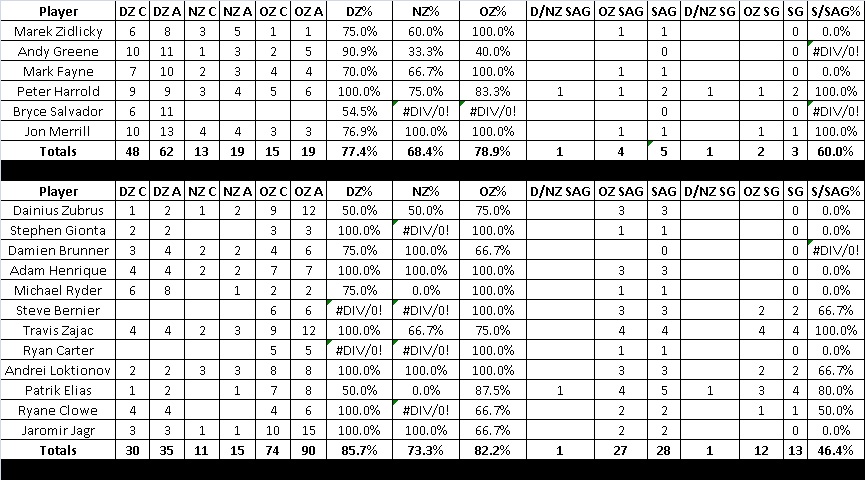 Forwards: When the defense look terrible, the forwards look great by comparison. In fact, this time they were great. A collective 62.5 PE%. Only Ryder (40%), Bernier (0%), and Loktionov (33%) were under 50%, and they combined for 11 of the team’s 40 exit attempts. Ryane Clowe led the group again with 6 attempts, 3 of which maintained possession. Similar to the passing totals, the exit attempt were evenly spread out with no one attempted more than Clowe’s 6, and no one attempting fewer than 2.

Defensemen: 8 total turnovers as Salvador only had 1, so he’s improving…sort of. This edition of “Our Defense Knows Not What They Do” is brought to you by Jon Merrill and Mark Fayne’s 6 total turnovers (3 apiece). Awful night by them. Andy Greene had the other turnover and a couple icings. Marek Zidlicky had the highest PE% at 40%. The group as a whole finished at 27.8%. Achilles heel of the team right here: turnovers and exiting without possession by the blue line. 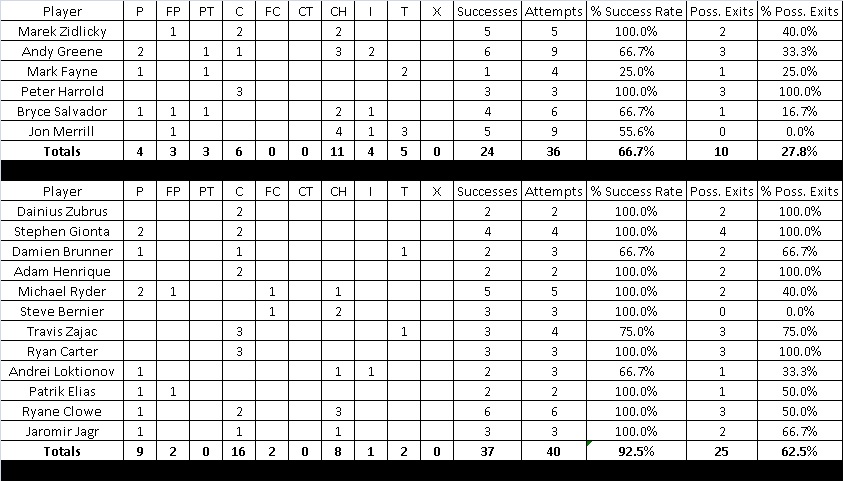