Bryce Salvador and the Myth of the Shutdown Defenseman

Veteran defenseman Bryce Salvador has gained a reputation as a shutdown guy over the years, but how far is that from the reality regarding his play these days?

Share All sharing options for: Bryce Salvador and the Myth of the Shutdown Defenseman

There are a lot of preconceived notions out there in the hockey world which linger, even in the face of mountains of evidence to the contrary. It's how Jack Johnson continues to get considered a top-pairing-level defenseman and how 'tough guys' of all sorts continue to get contracts despite having little utility as an NHL hockey player. With hockey analytics gaining traction over the past decade, a lot of these formerly accepted narratives have started to get challenged with increasing frequency.

One type of player in particular has seen their influence erode over the past decade with the rule changes from the 2004 lockout and the rise of shot-based metrics like Corsi and Fenwick. That player is the defensive defenseman. It's not that playing good defense in your own end isn't a virtue (it certainly is), but people have started to catch on that if you are constantly pinned back in your own end, there is very little good you can really be doing for your team. Blocking shots and throwing hits are great, but if those are the only weapons in your arsenal while the other team skates circles around you and you can't clear the puck, you're not very valuable.

Enter Bryce Salvador. Somewhere along the way, Salvador earned a reputation as a shutdown defensive guy. The numbers (at least going back to 2007) belie that to some extent, but I'm not here to argue about five-years-ago Salvador. I'm talking about the current day version, the one who is absolutely killing his team when he's on the ice right now. By eye, his play on the ice has looked downright ugly at times, and the underlying numbers somehow paint a much more damning picture.

There was a comment last week by user acasser which sent me down this particular line of thought and it was about playing low-event hockey. People have been getting restless with the worsening play of the captain while younger, more promising talents like Adam Larsson and Eric Gelinas slide out of the picture in Albany or as a 7th D. It was posited that perhaps Pete DeBoer is just looking to play low-event hockey. It's a theory that makes sense to some extent. The Devils are a team of limited scoring ability and they want games to stay tight so the Devils have less chance of being outgunned. The only problem with this thinking is that Bryce Salvador has become the absolute last option you want out there if you are looking to shut a team down.

That's right, Salvador is a 'shutdown defenseman' that is actually worst on his team at actually shutting teams down. Take a look at the rate of Corsi events (shots + missed shots + blocked shots) against for the Devils at 5-on-5: 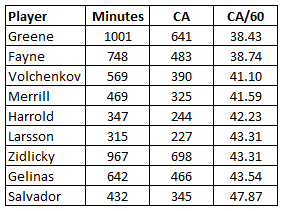 So he is worst on the team at preventing shot attempts and it's not particularly close. He is almost as far away from the 8th-best player (Gelinas) as the 8th best player is from is from the best in terms of shot attempts against. And we know that, unlike Eric Gelinas, Bryce Salvador is bringing absolutely nothing to the table in terms of offense. His lack of offensive ability would be forgivable if he were preventing shots like, say, Anton Volchenkov (who, by this measure, still has some claim to actually being an effective defensive defenseman), but he is not.

It's not like Salvador is getting buried in terms of zone starts and quality of competition, either. He is middle of the pack (5th out of 9) on the team in zone starts with a 52.7% offensive zone start share. He is 6th out of the Devils 9 defensemen in quality of competition (based on TOI). He's not being sheltered, but he's not exactly being thrown to the wolves, either. If the coaches were leaning on him in the toughest of situations consistently, you might excuse him being bossed so thoroughly in preventing shots, but he is not. He is getting middle of the road minutes in terms of difficulty and he is being absolutely crushed, relative to his teammates.

This is something that John actually touched on in his post on Jaromir Jagr yesterday. He showed that the one player who really dragged Jagr into the gutter when they were playing together was the Devils' captain. Jagr's Corsi rate didn't drop below 53% for any player that he has played 100+ minutes with this season... except Bryce Salvador, with whom his Corsi rate plummeted to 48.7%. Unsurprisingly, this phenomenon is not just limited to Salvador playing with Jagr, though.

A glance at the HockeyAnalysis WOWY (with-or-without-you) chart reveals an ugly trend. Every player who has played 100+ even-strength minutes with Salvador this season has seen their numbers suffer for it. Every. Single. One. Most of the time, when you look at a WOWY analysis, you'll see some guys who look better or worse with a player just based on chance. With players who are playing exceptionally well (like Jagr), you'll see most everyone get a boost when they're on the ice with them. It is the opposite for Bryce Salvador, whose play has cratered to the point that everyone looks worse when they're on the ice with him. Poor Marek Zidlicky has the misfortune of being the full-time caretaker of Salvador a lot of nights, and it certainly isn't helping his play. It's not until you get down to Ryan Carter's 90 minutes with him that you can find a guy who hasn't had his possession stats negatively impacted by his time with Salvador.

In 5-on-5 play, Salvador just doesn't have it anymore. He is bad enough to be a nearly-universal detriment to his teammates' play when he is on the ice. Based on his even-strength performance, there is a very good case to be made that he should be relegated to being a healthy scratch on a regular basis. Unfortunately, with his captaincy, that is unlikely to happen.

Even with his apparent difficulties on the ice at 5-on-5, some will point to his prominence on the Devils penalty kill as a reason to keep him in the lineup. But how effective is he on the Devils penalty kill, really? He gives up the most attempts of any player on the Devils' PK by a pretty wide margin. A lot of attempts are blocked, so he's better in terms of shots against, but he's still second to last. He's giving up a ton more shots and attempts this season than he did in the previous six, but is staying afloat in terms of goals against based on a very high on-ice PKsv% of .925 (his previous six seasons feature an .865 PKsv%, so I wouldn't count on that number being sustainable).

Now, a PK is a hard thing to judge sometimes based on shots/attempts alone since the sample sizes are so much smaller, but it looks very much like his shortcomings have reached the point where, even on the penalty kill, he's not appreciably better than his peers (if not worse). The step that Salvador seems to have lost is making it harder for him to do much more than stand in a shooting lane when he's killing penalties. Admirable, yes, but effective? I have my doubts.

By all accounts, Bryce Salvador seems like a great guy. His teammates like and respect him, which undoubtedly played into the decision to make him captain last winter. The problem is that being a nice guy shouldn't allow you free rein to stink out loud while you're on the ice. I don't doubt that he is doing all he can out there, but unfortunately, I don't think he is really capable of being an effective NHL player at this point. He is quite likely the worst defensemen on this team right now and there probably aren't a ton of regular defensemen in the league playing worse hockey than him at this point.

The issue is that the Devils are a team that is now so razor thin in their margin for error that they can't afford to keep giving someone contributing this little regular minutes. Salvador has become a paradox. He is a defensive defenseman that can't really play defense any more. They now have two defensemen sitting in Albany that can almost certainly play better hockey at this very moment and are still young and likely to improve. I realize the possibility of Salvador getting benched for his play are slim due to his ill-advised captaincy, but that doesn't mean we can't point out how much of mistake that situation is in the meantime. We just have to hope that the Devils recognize the reality staring them in the face sooner rather than later.