This is a look at the zone exit and passing statistics for the New Jersey Devils' 60th game of the season against the Columbus Blue Jackets from February 27th, 2014. Read on for the details.

The opening nine minutes had Devils fans unsure of what they were seeing. Shots in bunches were taken and three of them made it past Blue Jackets goalie Sergei Bobrovsky. Columbus played catch up for the next period-and-a-half, but Adam Henrique’s shorthanded goal in the final minute of the second period gave the Devils a comfortable two goal lead heading into the third. However, how the Devils owned the third period was the most impressive thing about this game. To not long hold the lead, but impose their will onto the Blue Jackets was excellent to watch. Score effects be damned, the Devils pummeled Columbus into submission. Let’s get to it.

Forwards: Not the best night in the offensive zone in terms of completion percentage (65.2%) for the forwards, though they made the most of their chances. The forwards finished with twelve shots generated on twenty-two shot attempts generated, finishing with a S/SAG% of 54.5%. Now that I’ve started tracking opponents of the Devils when I can get to them, if this stat is over 50%, that’s usually a good sign of efficiency.

I think we should start a fund, petition, chain letter, or something to get Steve Bernier better line mates. Bernier finished 9/10 in his passing, but was able to generate six shot attempts and two shots. He led the team in SAG and tied with Travis Zajac and Adam Henrique in SG. Compare that to the production of his line mates: Stephen Gionta and Ryan Carter both finished 3/3 with nothing generated. Yes, Deboer was mixing and matching lines after Brunner went out, but sitting Andrei Loktionov in the third to play Gionta?

Loki finished 8/11, generating two shot attempts and one shot. His biggest play of the night, however, was the interception of the clearing attempt and pass to Ryane Clowe that eventually turned into the first goal. Clowe had a decent game, only missing a single pass of his twelve attempts, but didn’t generate any shooting opportunities for teammates.

Jaromir Jagr controlled play in the neutral zone last night, completing all eight of his passes there. He finished 20/25 overall and generated four shot attempts and three shots. Zajac was a bit off as he finished 10/16, though he did generate two shot attempts that resulted in two shots, so at least he was efficient on the SAG he was able to put up. Dainius Zubrus finished 11/17 with three SAG and one SG.

Defensemen: It was open season in the Columbus offensive zone as nearly a quarter of the passes by Devils defensemen were attempted in the offensive zone, mostly due to Andy Greene and his eight completions on nine attempts; he finished 18/21 in all three zones. Greene generated two shot attempts (SAG) and one shot (SG) as well. Marek Zidlicky (12/15, 2 SAG, 2 SG) and Mark Fayne (7/7, 1 SAG, 1 SG) were the only other blue liners that were able to generate shots.

Eric Gelinas was the busiest in the defensive zone and completed 13/15 passes. He didn’t generate any offense at even strength, but all saw his power play contribution. Jon Merrill (9/10, 1 SAG) had a steady game, though Bryce Salvador completed just over half his passes (5/9). 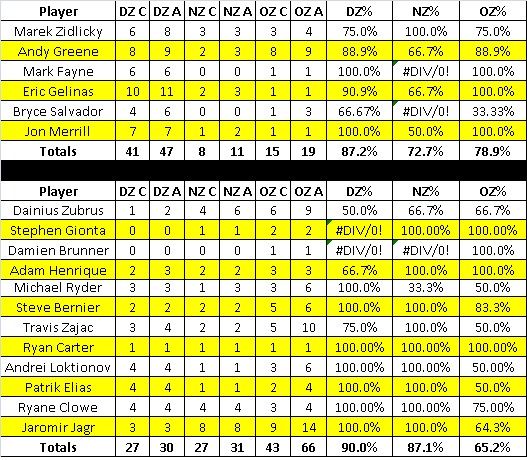 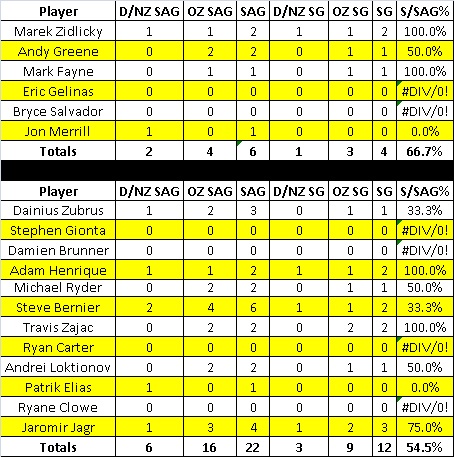 Forwards: An even 50 PE% for the forwards. Jagr (8 Attempts, 75% with possession) and Loktionov (6 Attempts, 66.7% with possession) led the team in PE% among players with at least five exit attempts. Zubrus, Gionta, Henrique, and Carter were all under 50%, but everything else was either at 50% or above. A decent night, but you would have liked to see more efficiency from Zubrus and Henrique as they normally are better. Gionta and Carter combined for three turnovers, while Zubrus and Jagr each had one as well.

Defensemen: Zidlicky (44.4 PE%) and Merrill (20 PE%) accounted for nineteen of the defense group’s thirty-four zone exit attempts. Zidlicky was good, not great, as he had one turnover; Merrill had several chips out of the zone to alleviate immediate pressure by Columbus, but without possession.

Greene and Fayne each only attempted three exits, Salvador attempted four, and Gelinas attempted five. Perhaps Deboer has given instruction to both Zidlicky and Merrill to be handling the puck while attempting to exit the zone now. 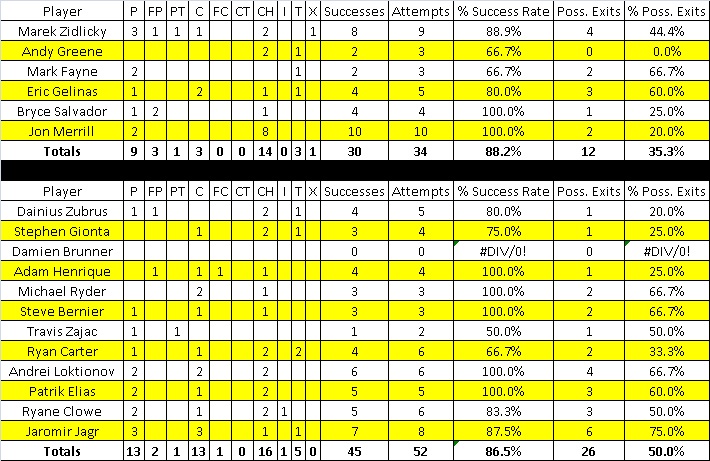