Share All sharing options for: Passing Analysis:Devils at Capitals

This is a series of articles looking at the Devils opponent’s passing stats in a game-by-game basis. The logic behind doing this stems from how we use Corsi. If a team attempts forty shots in a game and their opponents attempt twenty, the team with the larger percentage of shot attempts wins the Corsi battle and has the higher CF%--in this case it would 66% (40/60). My thoughts are, what other stat “totals” are teams generally “winning” that can help us evaluate performance? This is the first step towards answering that question.

I’m starting to look at different ways we can use this passing data to evaluate the Devils and how they compare to other teams. This article looks at the Devils February 8th game against the Washington Capitals.

John’s recap from the game is here. My passing recap is here. The chart from that game is below, as well as the opponent’s chart. 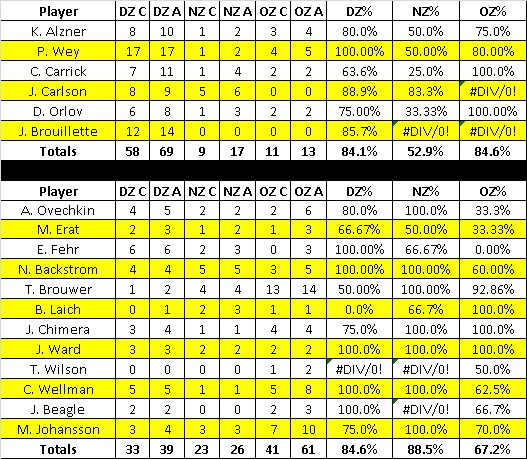 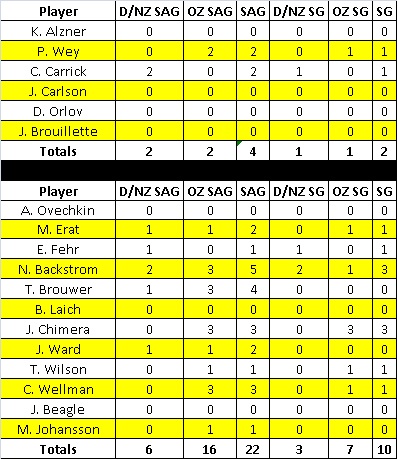 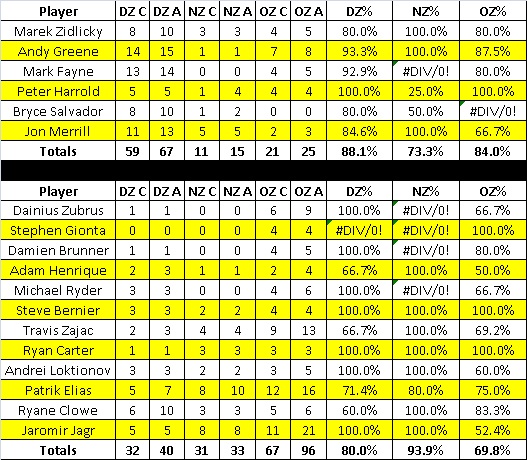 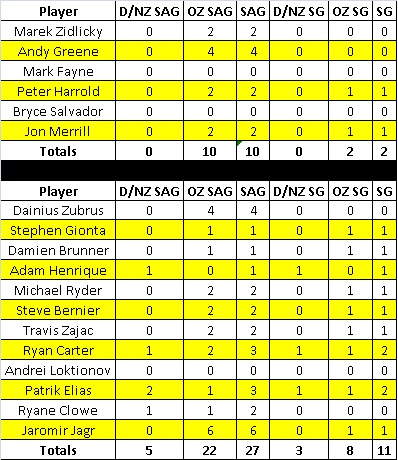 The Caps defense did not do too much in this game. Only Patrick Wey and Connor Carrick generated any offense, finishing with two shot attempts generated (SAG) and one shot generated (SG) apiece. Wey was very good with his accuracy (22/24), missing only two passes all game. John Carlson (13/15) and Julien Brouilette (12/14) were equally as accurate.

Alexander Ovechkin’s stat line isn’t that suprising: 8/13 with nothing generated. Nicklas Backstrom is the provider on that line and he finished 12/14 with 5 SAG and 3 SG. Troy Brouwer was the most active at forward for the Caps, finishing 18/20 with 4 SAG, but no SG. Fourteen of his pass attempts were in the Devils end of the ice, so he was able to get in and set up shop for more effectively than the other Capitals forwards.

Now we’ll get into looking at who controlled pass attempts in each zone and overall and see how it relates to Corsi. We’ll start with each team’s completion percentages.

The Devils were more accurate across each zone, including a 13.1% advantage in neutral zone play. The Devils had smaller advantages in the defensive (0.7%) and offensive (2.4%) zones. Once again, nearly identical to the Edmonton game, the Devils dominated pass attempts in the offensive zone: 121-74. Pass attempts in the other zones were much closer: a 108 – 107 advantage for the Capitals in the defensive zone, and a 48 – 43 advantage for the Devils in the neutral zone.

The Caps are the first team I’ve seen generate less offense than the Devils from their blue line. The Devils held a 37-26 edge in SAG, but only a 13-12 edge in SG, so many of their attempts were misses or blocks. Because of this, Washington finished with a much better shot attempt conversion rate (S/SAG%) of 46.2%, compared to New Jersey’s 35.1%.

In the four games I’ve tracked and posted in the last week, the team that has had the edge in S/SAG% has won all four games. We’ll see how that continues as we go forward. Also, if anyone still has questions on what the S/SAG% is, it’s basically the percentage of the shot attempts a player generates that result in actual shots on goal. You may see it as S/SAG% or SAG Conversion Rate, or simply, conversion rate. It’s all the same: a measure of efficiency and shot attempt quality.

Overall, the teams only had a 1.7% difference in neutral zone attempts (edge to the Caps), but there’s about an 11% difference in terms of offensive zone time between the two teams. The Devils attempted 43.8% of their pass attempts inside the Capitals zone, while Washington only managed 32.9% of theirs.

Unsurprisingly, the Devils controlled 55.1% of the pass attempts in the game. Corsi and Fenwick also sided with the Devils in this game, but the result did not. 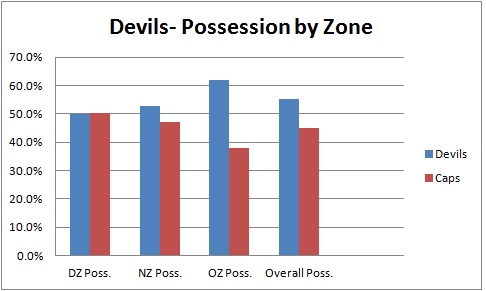 What did you think? What are some other ways to compare some of this data? As always, I’d love to hear your thoughts, suggestions, criticisms, and overall feedback to moving this process further along. Passing Data Explained: A Reminder

What you see above are charts illustrating pass completions, pass attempts, and pass percentages for each player in all three zones. A pass that goes across a zone or two will be marked as occurring in the zone it originates from.

Each completed pass that results in a shot taken by a teammate counts as one “shot attempt generated” or “SAG” in the chart below. This is tracked to attempt to determine which teammates are better at generating opportunities to shoot. You’ll also see a “shot generated” or “SG” column to track the highest quality of shot attempts. Finally, there is a “shot-attempt conversion rate” or S/SAG% that illustrates the percentage of shot attempts generated that result in actual shots on goal.